The well-known 4-2-3-1 formation works great for Hamburger SV this season as we achieve fantastic results.

Of course, the key to the tactics are players, but without the preferred moves, this would be another story.

Each player has the potential to become a star in the Bundesliga and my job is to get the maximum out of it (player traits) depending on the position in the team.

It’s not enough for me to choose a favorite formation and I expect the 5-0 win against Bayern Munich.

It is very likely that I will lose with the same result because there are no easy points in Football Manager.

Therefore, it is important to pay attention to the little things …

When I decided to take on the job at Hamburger SV, the club was 14th in the Bundesliga.

Analyzing the situation on the ground, I realized that the team had no potential for attacking style of football.

The main problem was the lack of quality strikers in the team.

Then I started thinking about formation with one striker in the final third, (not too defensive).

The logical choice is the 4-2-3-1 and the magic is hiding in the midfield. 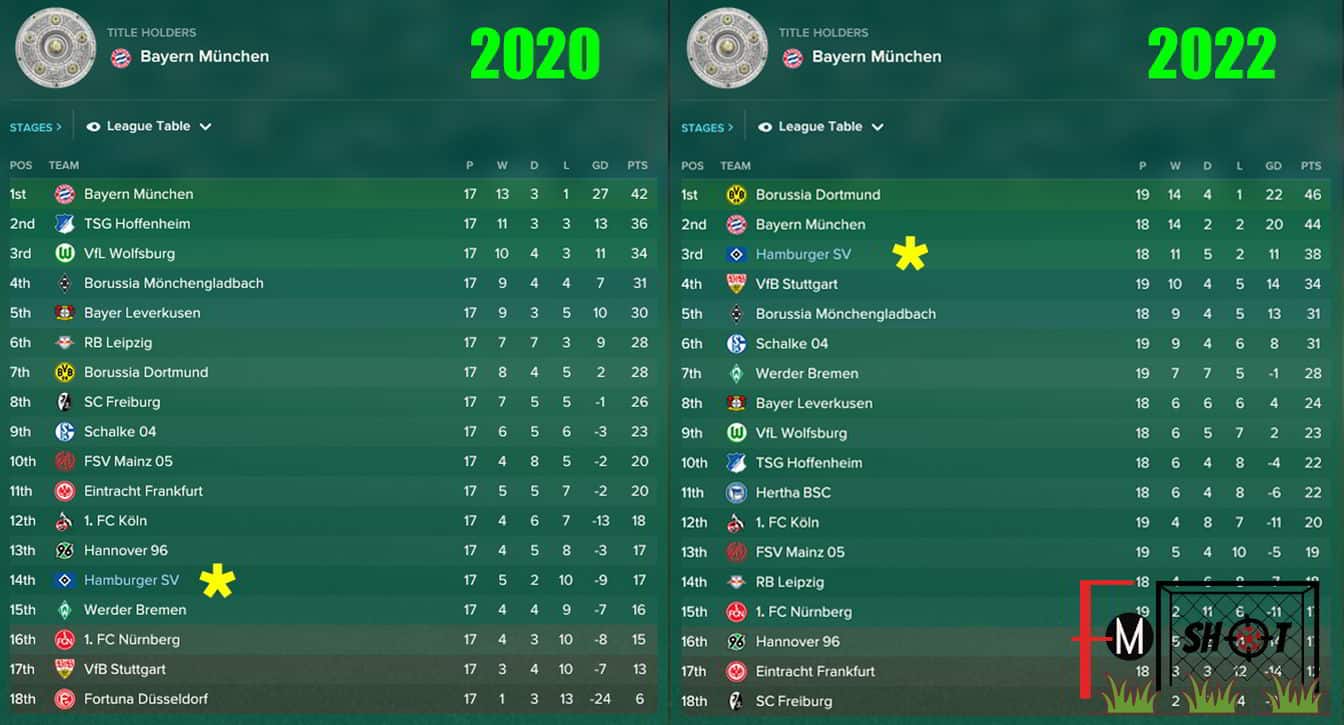 I think it’s best to start the match with the “mentality -standard” option.

It would be stupid to choose defensive against two different teams – the first and the last in the table.

On the other hand, players need to achieve a certain level of tactical familiarity in training.

Frequent changes will represent a major obstacle along the way.

When we talk about “Team Shape”, I can say that two things are important to me: creativity and arrangement of players on the pitch.

Obviously, the striker needs the help of the players in the AML and AMR positions.

This means that everyone must contribute both in defense and in the attack.

Creativity is the number of playmakers in the team. Hamburger SV has an excellent choice in the middle so I don’t intend to put a sign – stop.

My vote goes to the team shape – very fluid.

This is the heart of tactics! But … Sometimes it’s better to leave “an empty box” than to choose the wrong option. Mistakes are very costly on the pitch.

For example, using 4-2-3-1 with More Direct Passing + Higher Tempo I had poor results during the season. I tried to counter-attacks to surprise an opponent but unsuccessfully.

Then I made tactical changes and with Short Passing + Retain Possession it was the other team.

I leave it as it is – normal. The first 15 minutes of the match I devote to the analysis of the opponent.

After that, the defensive line goes up or down, depending on the situation on the pitch.

Try to change the Def-Line every 10 minutes and you’ll notice a small improvement in the game of your team. 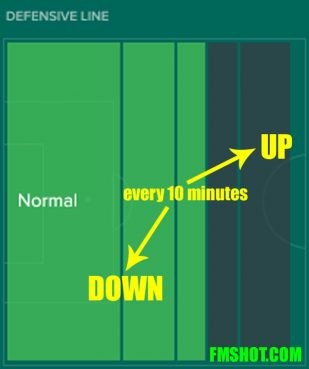 Both options have a green color for me.

Four players in the defense + huge international experience are more than enough to activate the “use offside trap,” and the marking scheme is a little bonus because I set closing down – less.

I want pressure on the opponent’s half. 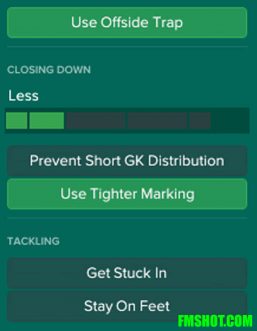 As I said at the beginning of our analysis, the attacker needs help (AMR and AML), but their place, during the transformation, is filled by players at DR and DL positions.

Based on personal experience, the 4-2-3-1 with “exploit the middle” doesn’t work well against strong teams.

It is much better to use the play out of defense. 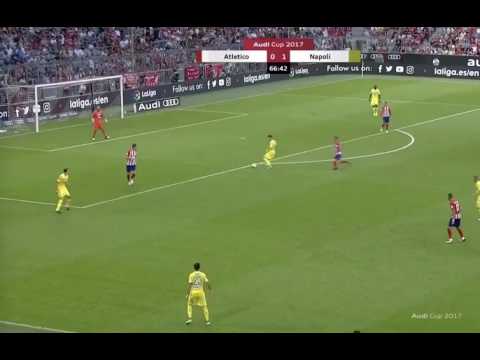 Although it is much more logical to choose the “lower tempo” because in this way the team kept the ball (possession), but this combination works great for me.

It is important to experiment and find the right option. 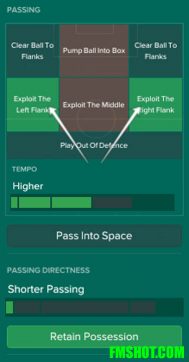 Most Hamburger SV players have a price above EUR 10 M and I don’t think it’s OK to limit their creativity.

By choosing “Be more Disciplined & Stick to Positions” I’m doing a favor to my opponents.

When I would take charge of the club from a lower league, then I would apply the other rules.

It’s best to start a match with “fairly width” because the Volksparkstadion is 102×65 m in size.

Although most clubs play in the pitch dimensions 105×68 m (Bundesliga) so there is a possibility for the option “wide”. 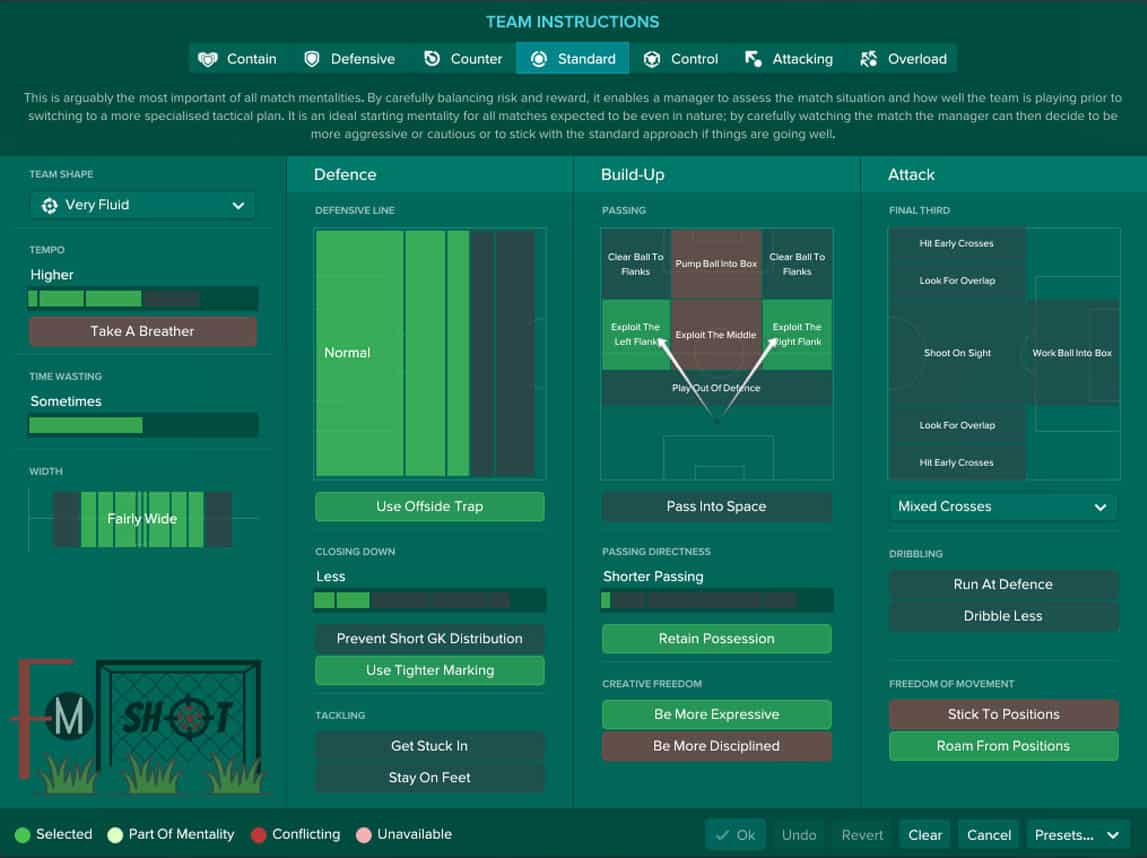 That’s it. This formation works well for me and I am very satisfied. The key players are in the CM and AMC positions.

By the way, I like to use the following combinations when I move the defensive line:

Finally, I have one question for you – what do you think about the 4-2-3-1? Thank you for your attention and time.