Frankly, I think the medical centre section didn’t cause great euphoria among FM players when it first appeared in Football Manager 2018.

Also, I believe that many haven’t noticed the lack of some indicators. But …

Who else is paying attention to Condition/Sharpness?

Playing matches when this is low risks injury as well as an even lower rating in future. Only rest from matches and/or training can help a player to recover.

Match Sharpness represents the player‘s readiness for competitive football. If he is lacking in recent game time this rating will suffer, but the only way to build it up is through minutes on the pitch.

Players low in Match Sharpness will struggle to keep up with the pace of a competitive match and will also be more susceptible to injury.

Back in the old days, these indicators used to be an integral part of the Squad option, and now, they suddenly disappeared. The reason is more than obvious.

However, there is a way to make certain adjustments with the help of Customize Current View.

Let’s open the door of the Medical Centre

At the reception, my sports scientist’s report is waiting for me. Otherwise, I like to hear his opinion about the physical fitness of the players.

Is there room for a higher tempo in training or not? Who deserves a break of a few days? What can be the cause of the players’ frequent injuries?

These are some questions that require an answer, and the advice of a sports scientist is always welcome.

I must say that this staff has a role and its attribute called Sports Science!

The next step is to look for a player with a red inscription on the back – very high injury risk. It’s a sign that the alarm is on!

Low Condition is causing the problem in most cases. However, I know that the player has the strength for one half …

Last is the most important one, because with one click we get very useful information. Did you know that the virus may have effect for 8 months? Yes, you have read well – 8 months.

Of course, this is a small joke, but I suggest you look at the following pictures. 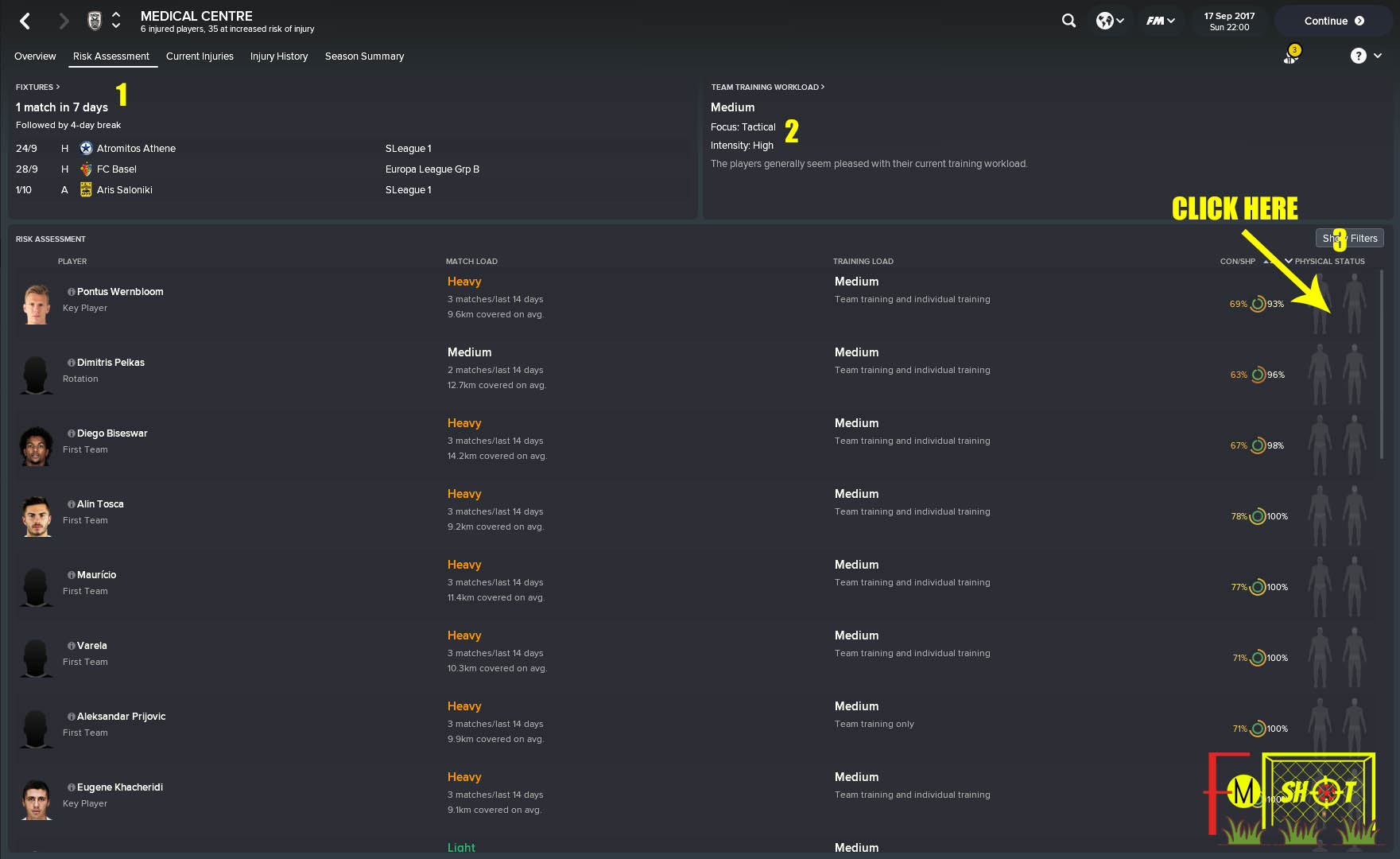 I don’t think it is necessary to analyze this option in detail, because everything is crystal clear. I have 3 players who are out of the pitch.

The injuries are as follows: bruised knee, thigh strain and damaged cruciate ligaments.

The medical team is made up of one specialist and two physios. I expect their return soon!

And, most of all, I miss the full-back Dorian Lévêque (DL).

Here I want to check out who is on the popular list – most days missed in the last 12 months.

Unfortunately, the winner wins a valuable prize, and it is in this case – the transfer list.

I remember that this report was visible at the end of the season in Football Manager 2017.

A good move by Sports Interactive.

What will happen if we don’t listen to the advice of the medical team?

We’ll find out very quickly because I decided to do a little test. Here’s what this is about.

Players with the tag “high injury risk” will spend 90 minutes on the pitch as well as those who are not physically fit. What will happen?

I really don’t know, but someone will pay a high price. Of course, one swallow doesn’t make a summer, but I expect interesting results. 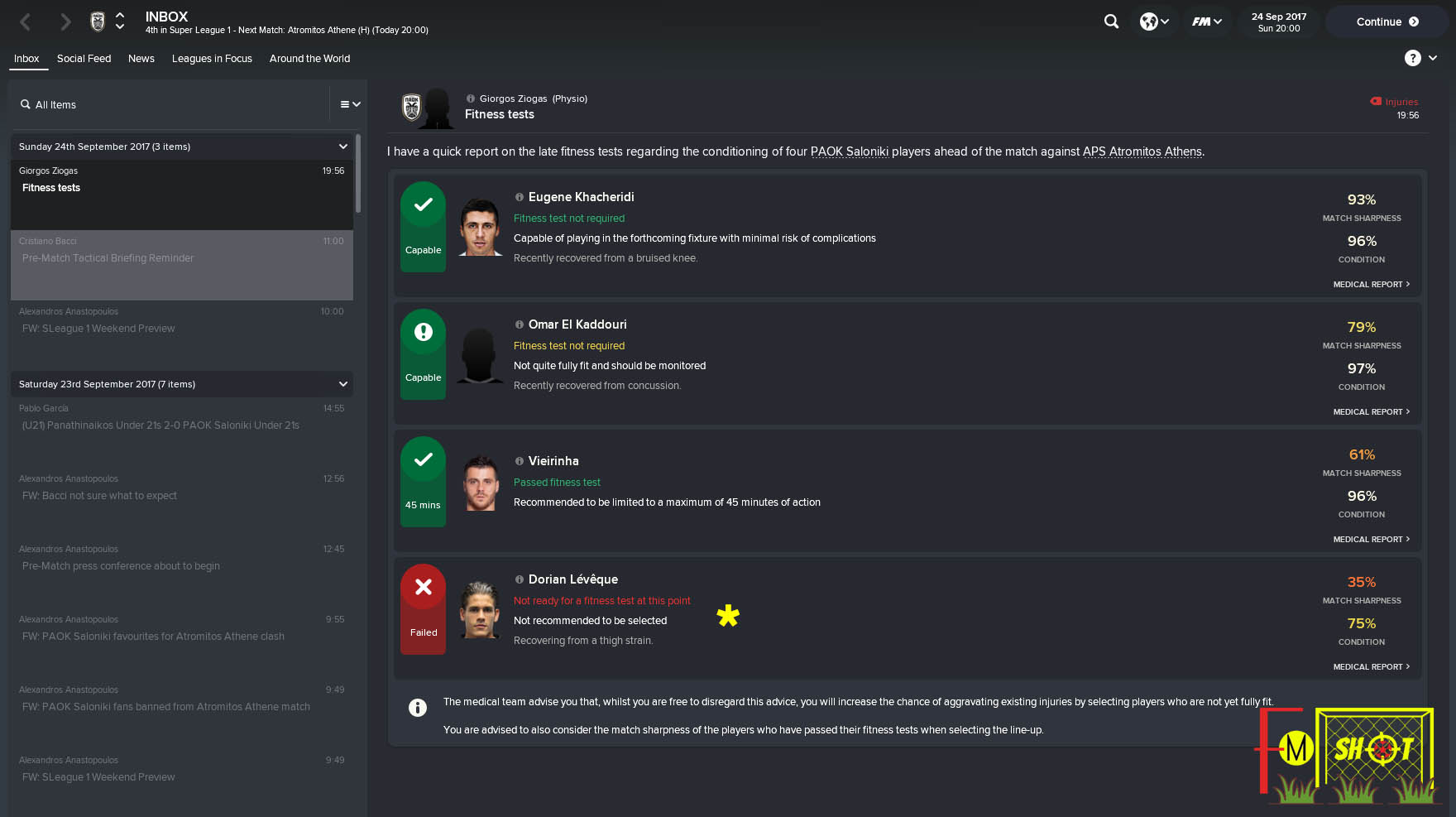 As you can see, Dorian Lévêque (inj) has successfully passed the test!

The medical team was very clear (not recommended to be selected), but I risked it.

Vieirinha was allowed 45 minutes of action. He fought like a lion on the pitch and earned 2 yellow cards (79 mins). But, I have one simple rule. Stupid fouls deserve “fine 2 weeks wages“.

Omar El Kaddouri and Eugene Khacheridi have only words of praise from my side.

Would I repeat the experiment? – Absolutely, no! I would carefully read the report of the medical team, and after that, made the final decision on the selection of players for the upcoming match.

Each of us has a role to play, and mine is to create a team that will win the title in Greece this season.