6 Ways to Improve Full Back Attributes in Training

Full Back, or Wing Back, that is the question. Having read on the internet about this topic, I noticed that one question attracted most attention: What is the difference between these two roles?

The answers are very interesting, but one stands out.

“There’s a hell of a lot more to add to that breakdown, but just try and remember that for the most part, three at the back means that there are wingbacks, and four at the back means fullbacks.” By Adam Silvers

In the FM world, it is not difficult to find the answer to this question because we have everything needed: attributes, roles/duties and player instruction.

Based on personal experience, I can say that WB is a better choice for the attack, while FB is the ideal option for defensive tasks.

Choose a role that suits your style and tactics

The Full Back is a key player in modern football, having to supplement this traditional defensive duties with overlapping runs down the wing to support forward play and help attacks overload the final third.

Although primarily a defensive player, he must be prepared to get forward when the team needs extra width. 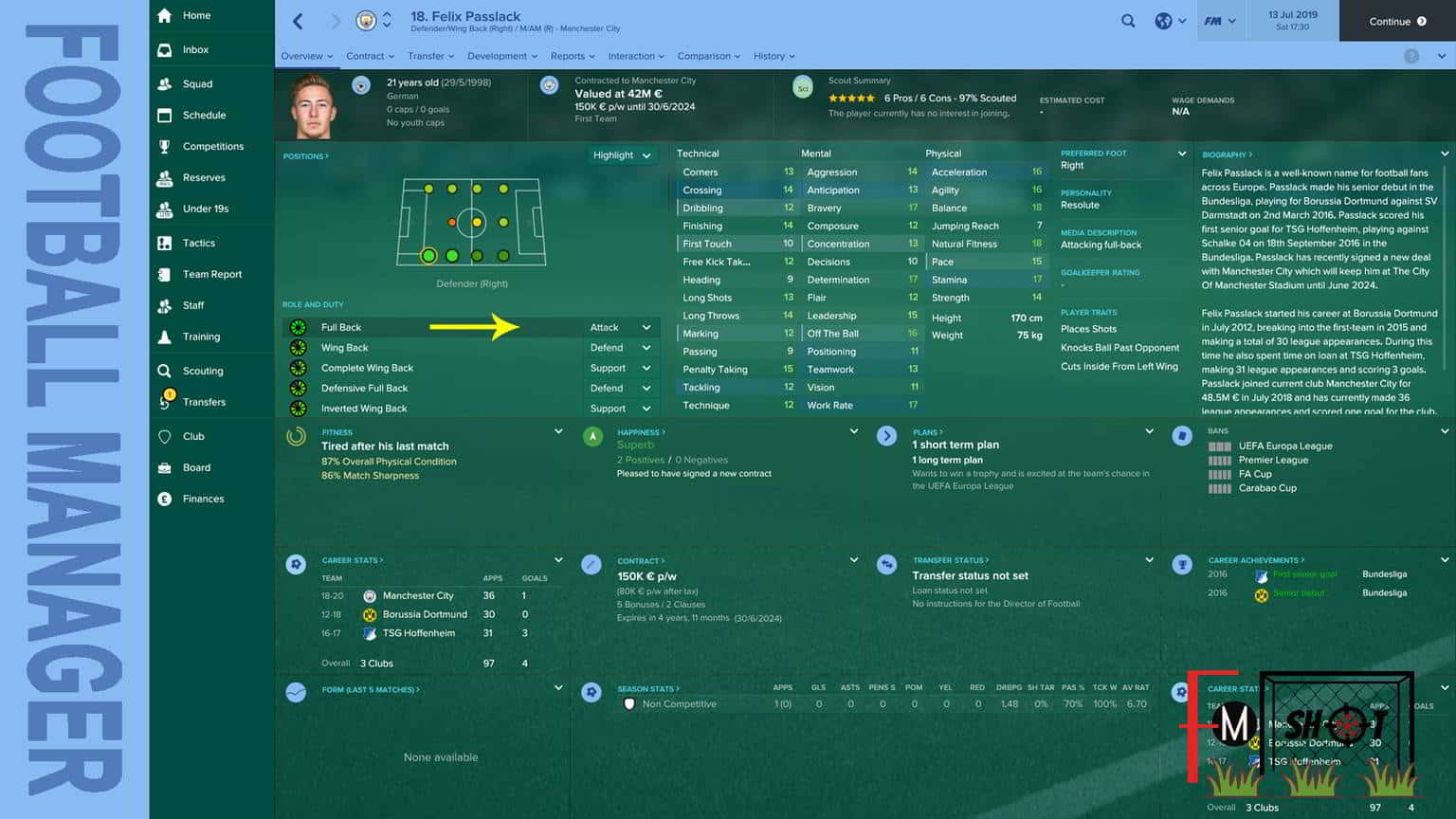 Defend – the player will stay back with defensive line and make simple possession passes down the flanks or into central midfield.

Support – the player will support the midfield by providing extra width and will look for crosses and through balls when the opportunity for each arises.

Attack – the player will suplemments his defensive responsibilities by overlapping the midfield and providing first time crosses into the area.

Usually playing out wide with no wing support, the Wing Back must fulfil all the attacking and defensive duties of wingers and full backs.

In attack he must be prepared to run at his man and put it aggressive crosses, in midfield to help win the possession battle and in defence to close down opponents, block crosses and win back the ball when possible. 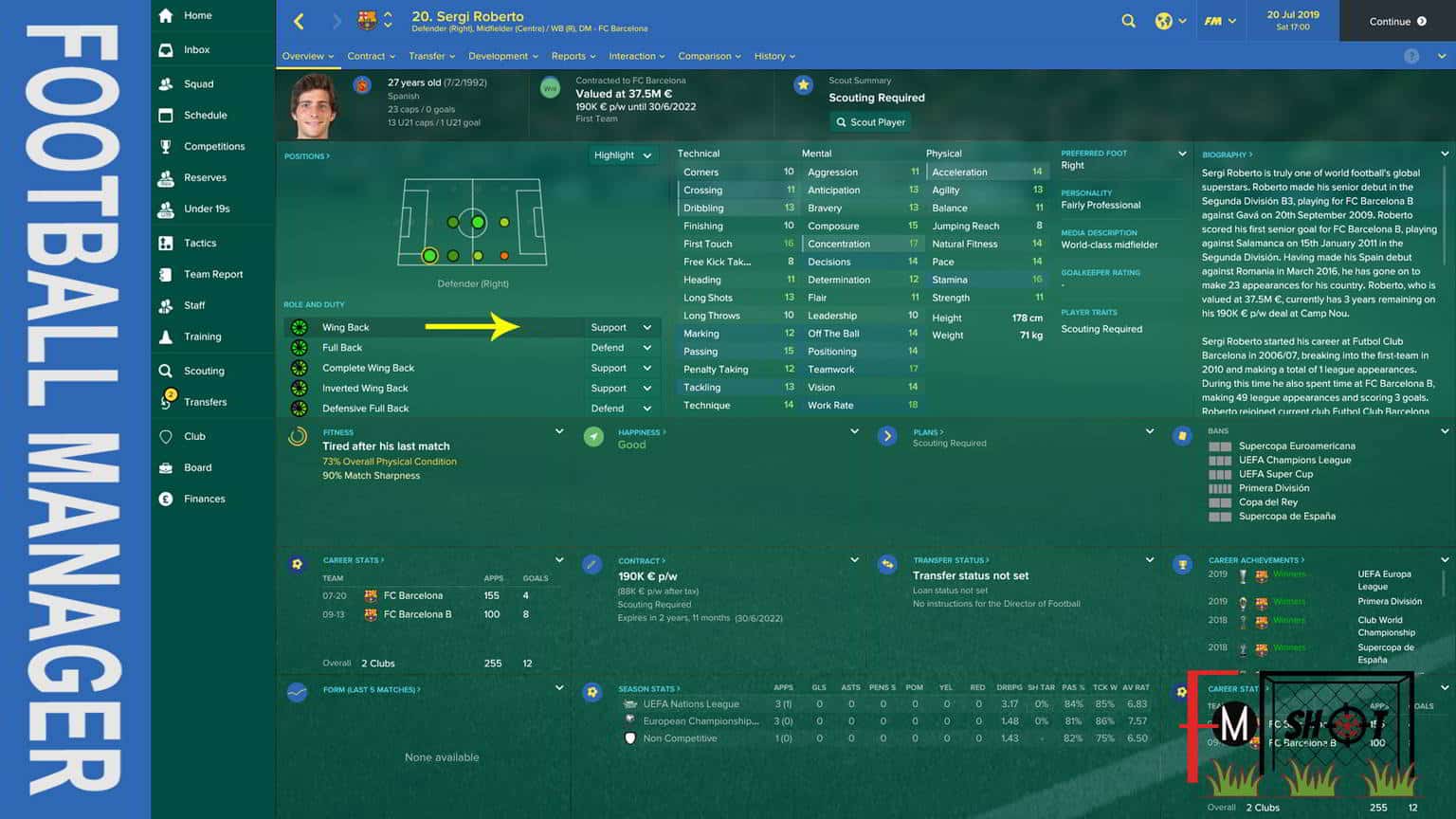 Defend – the player mainly stays deep, but will still cross the ball when in space to do so.

Support – the player aims to provide angled through balls from out wide, although still crosses when the opportunity arises.

Attack – the player aims to overlap down the flank to provide wide support for attacks, run at his man and get crosses in from the byline.

The Defensive Full Back knows his strengths and weaknesses and focuses predominantly on his defensive duties, scarcely going forward into a more attacking role.

This role is only available with a Defend duty. 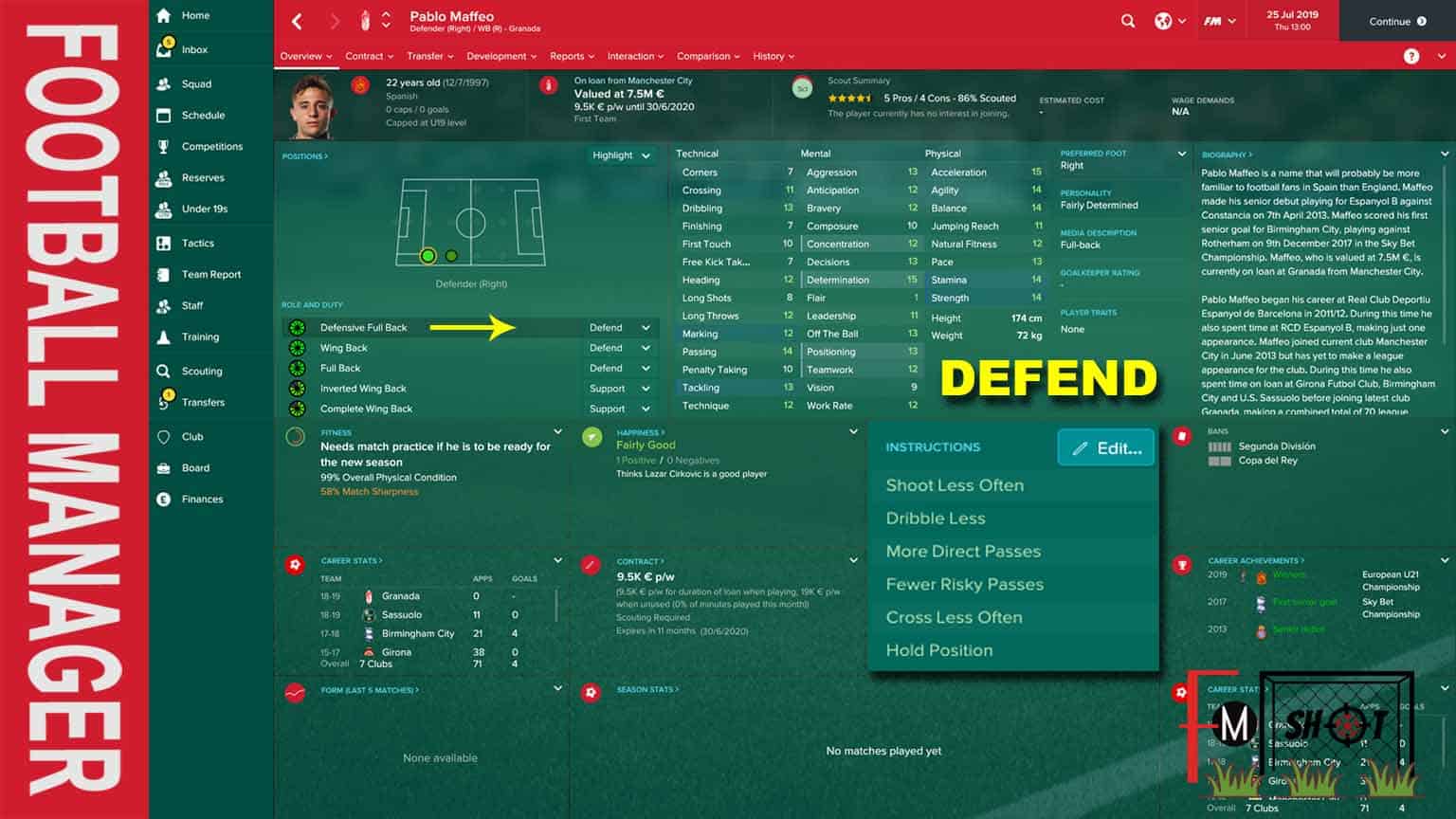 The complete wingback loves to attack, and whilst he is capable of occupying his defensive duties, his natural inclination is to affect the game in the opposition defensive third.

Support – the player will look to combine his attacking instincts with some defensive responsibilities in an effort to provide balance to the team.

Attack – the player will be a little more adventurous in his attacking exploits as he seeks to primarily impact the game in the opposition’s half of the pitch. 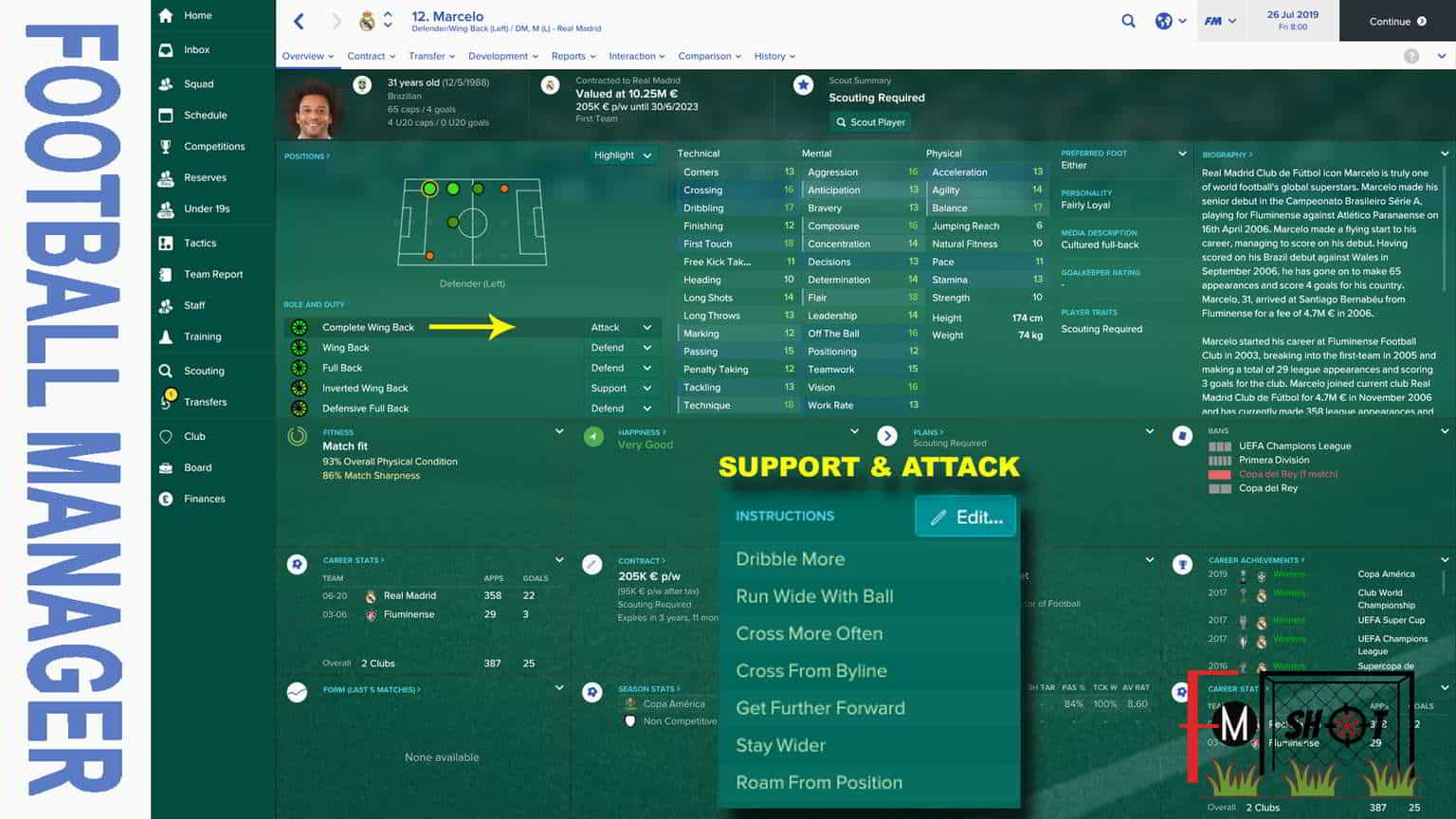 The Inverted Wing Back will function defensively much like a standard Full Back or Wing Back.

However, while a normal WB will offer width to an attack, the IWB will attempt to drift inside and create space for players around him.

Supporting attacks by providing crosses is not the priority for this role, instead the Inverted Wing Back will look to carry the ball and congest play in the middle as much as possible.

This role is only available with a Support duty. 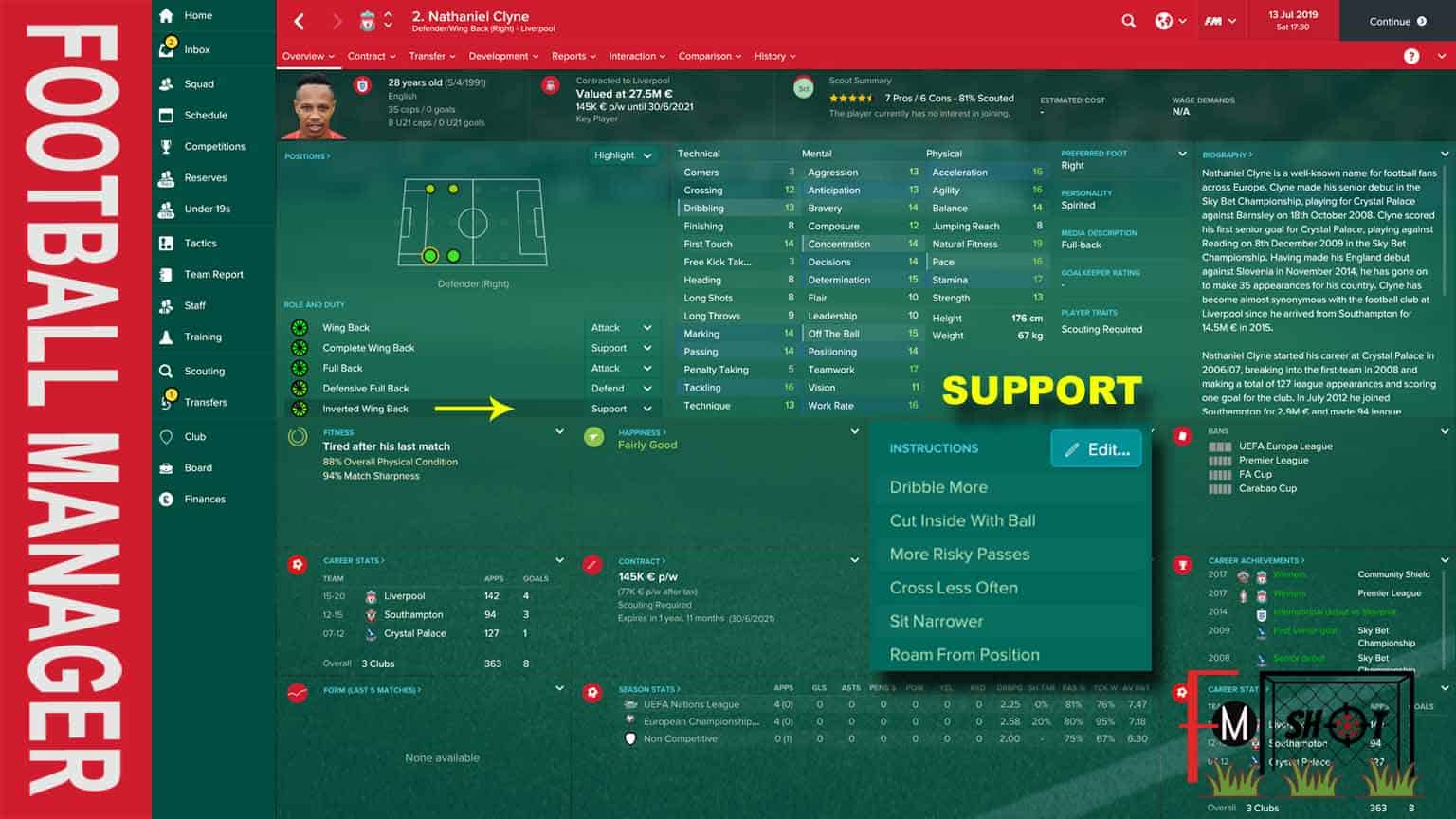 Four elements are needed in order to drastically improve attributes of players:

The last one is interesting. What are training tasks good for the DR/L or WBR/L position? First, let’s pick one player.

Last time, as an example, I have used a player from my club. Now it will be a big name in the world of football.

I have decided for Marcos Alonso and I don’t think I made a mistake. 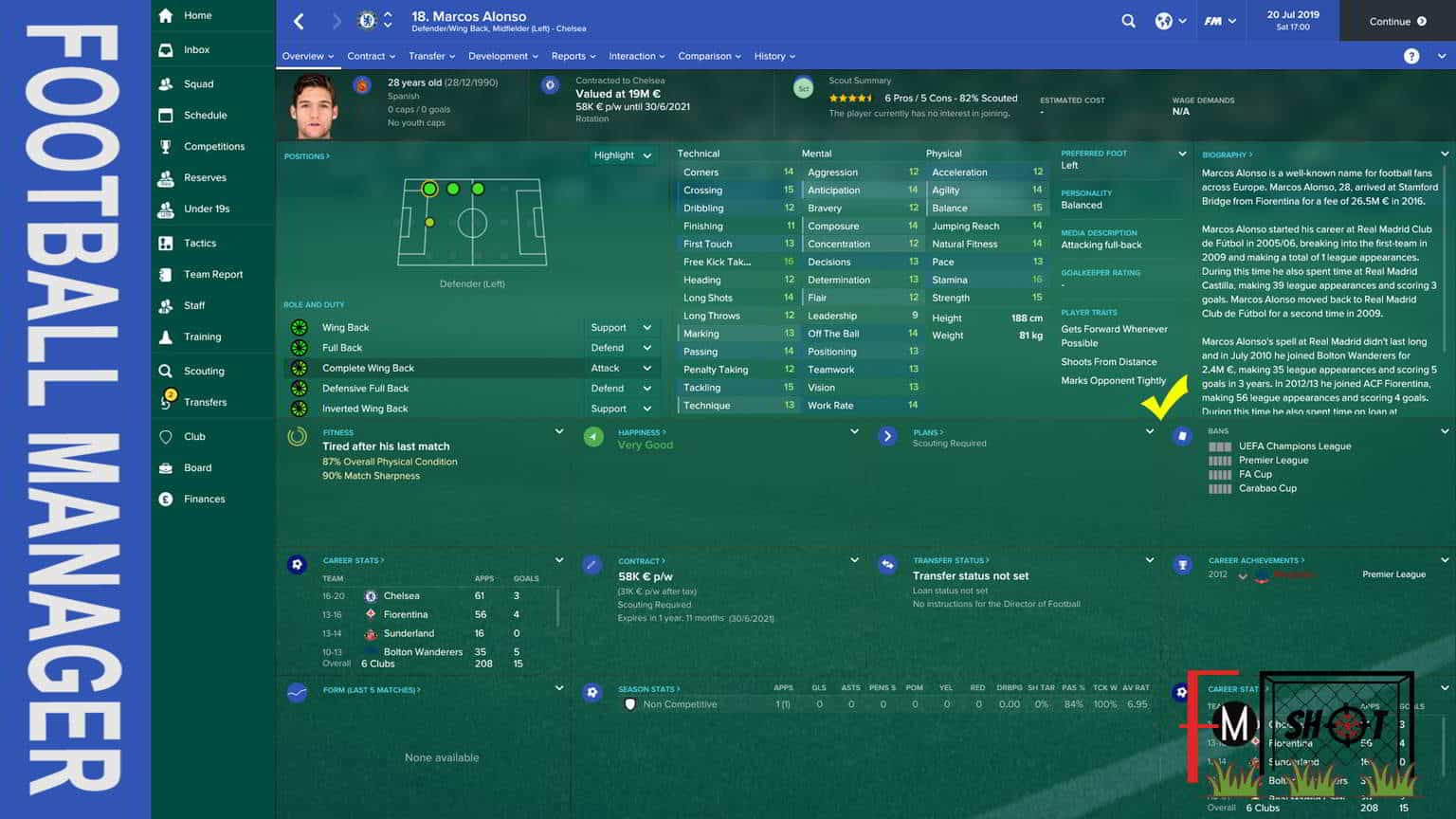 Just look at these attributes: Tackling 15, Passing 14, Crossing 15, and Stamina 16. The player has all that is necessary the Complete Wing Back position.

Let’s say, I would have assigned him the following duties: CWB (Support) – UEFA Champions League and CWB (Attack) – domestic league and national cup. But …

Tactics is as important as the opponent.

1. Gets forward whenever possible

It is hard to imagine that Marcos Alonso doesn’t exceed half of the pitch. However, It cannot be expected a quick return to the primary position (Acceleration 12 and Pace 13).

It can easily be concluded that the greatest danger is the opponent’s winger, who carries a yellow card in his pocket …

It’s enough for me to see Tackling 15 and the thing is solved.

I don’t pay too much attention to the player’s mental side (Decisions, Composure, Anticipation and so on).

Why complicate things? It is better to use the association – one attribute, one preferred move.

3. Some long passes or looks for pass rather than attempting to score

I have a dilemma here. Both tasks are feasible because Marcos has a good Passing 14. On the other hand, I have included a “backup option” in the whole story, because the problem is Finishing 11.

Moreover, his primary task is not scoring goals! That is for the striker. But, long balls can be of great use to the attack.

The attribute Long Shots 14 is not a good recommendation for FB Preferred Move. I’d like the rating a little higher.

Marcos has successfully overcome this obstacle so there is no needed to explain further.

These positions, DR/L or WBR/L, are the right solution for this task. But … Sometimes Long Throws has a low rating (between 8 and 10).

Then it is smarter, that the player increases the attribute rating through the Individual Training Focus. After that, there will be no problems for the realization of this task.

Two attributes are crucial when choosing this option. These are Free Kick Taking 16 and Strength 15 (my opinion).

Given that Markos uses more left foot than the right, a free kick should be taken from the right. I think it would have more effect if we look at the bigger picture … 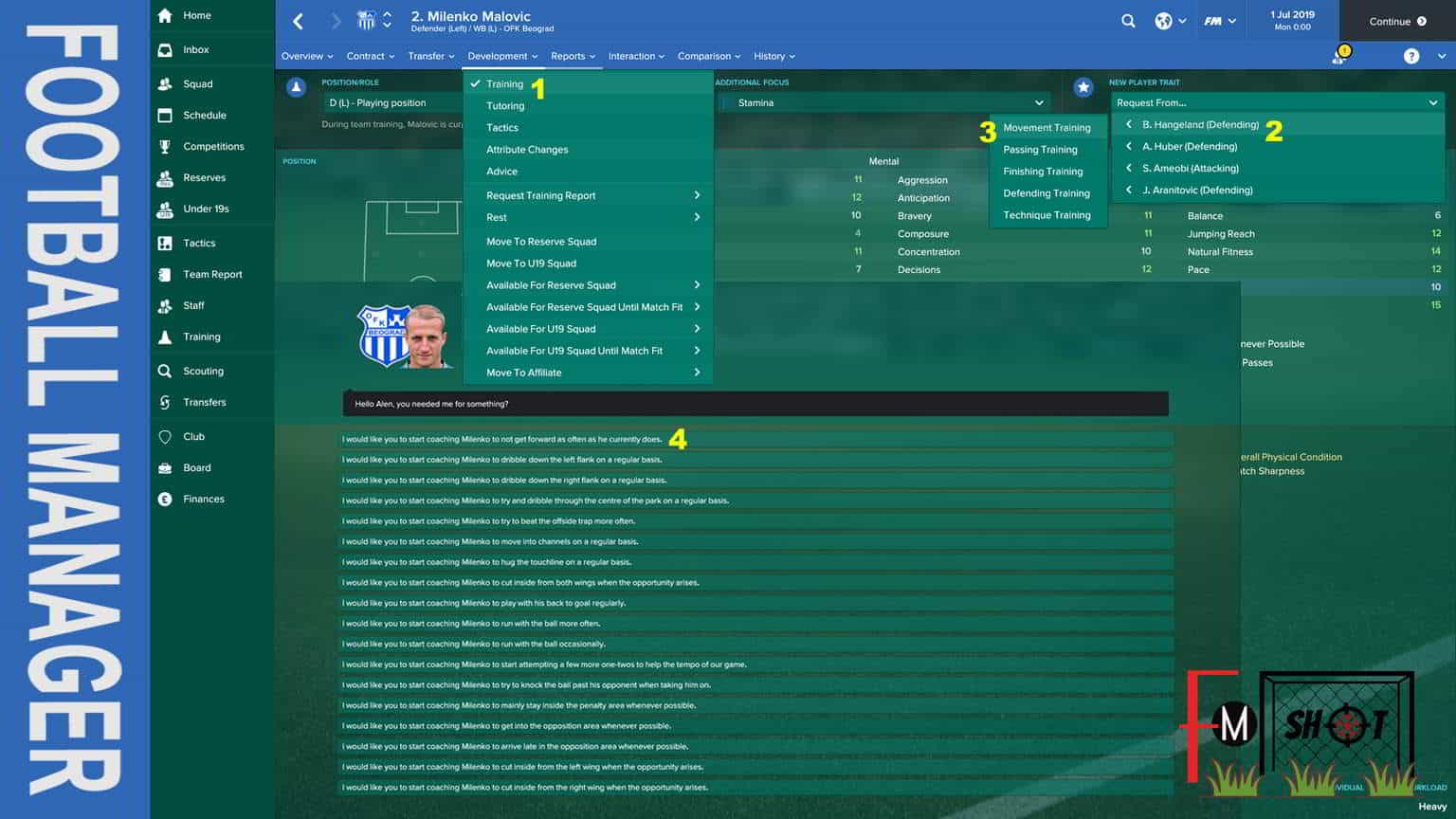 Pin
Gets forward whenever possible 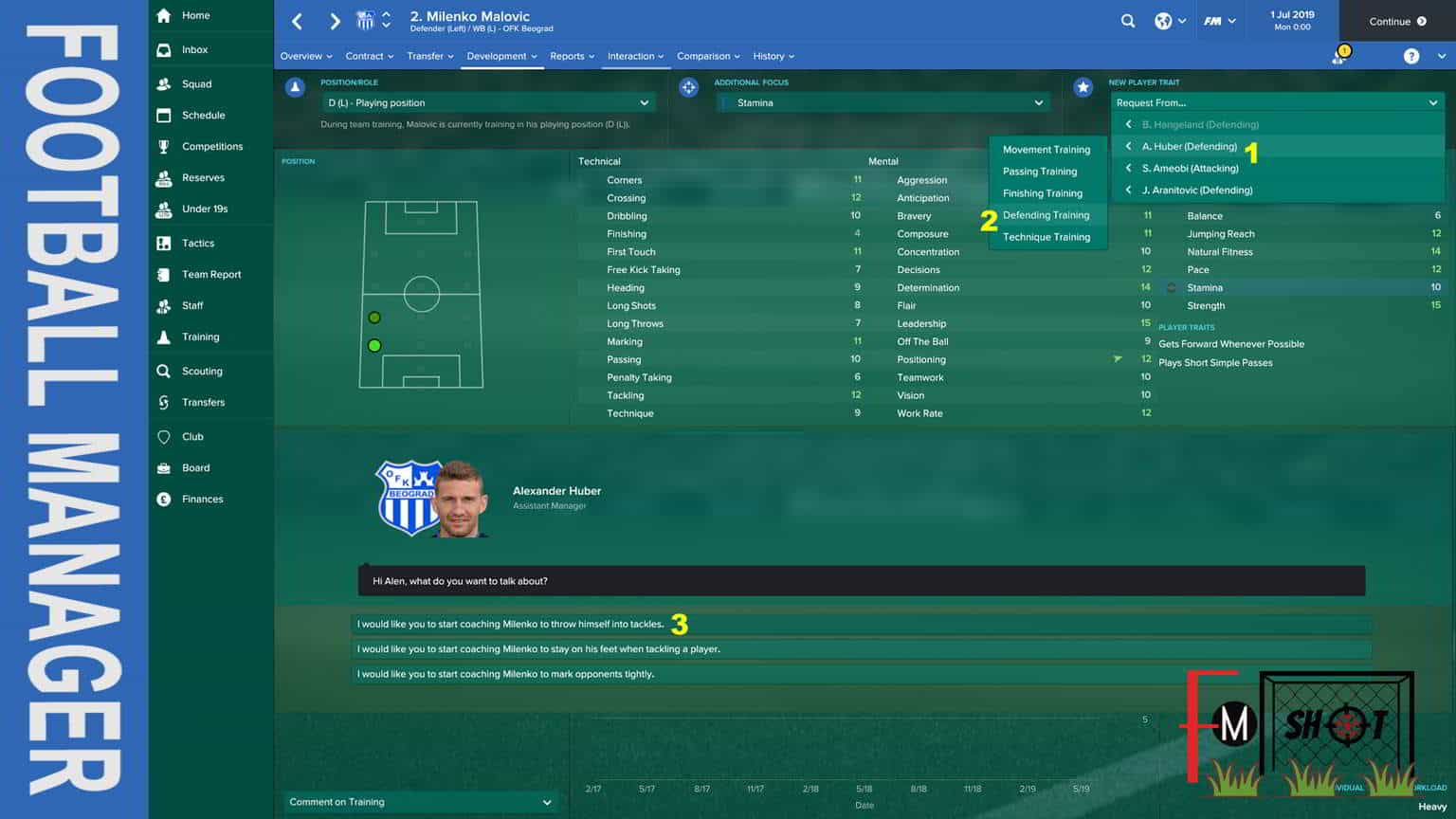 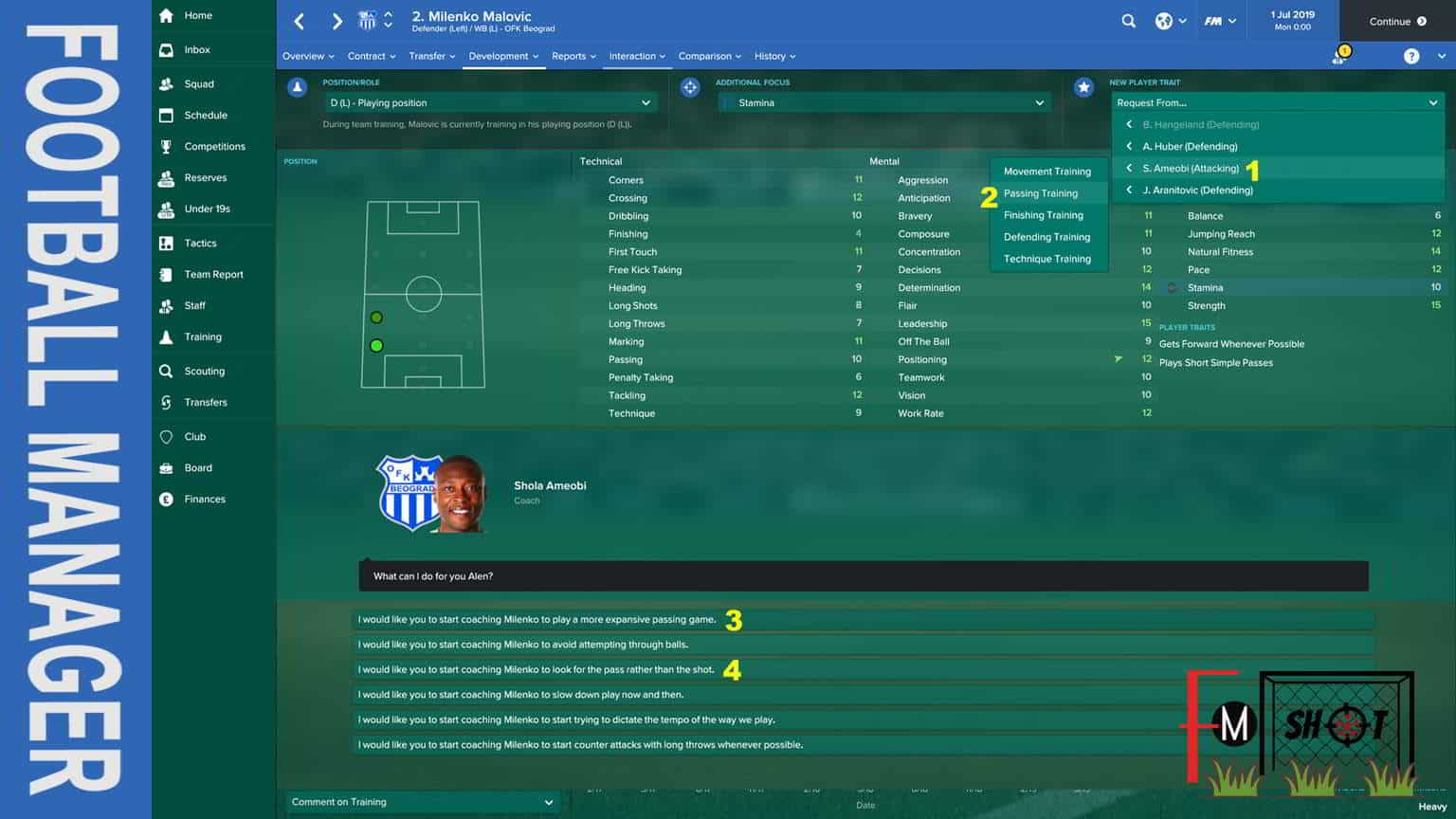 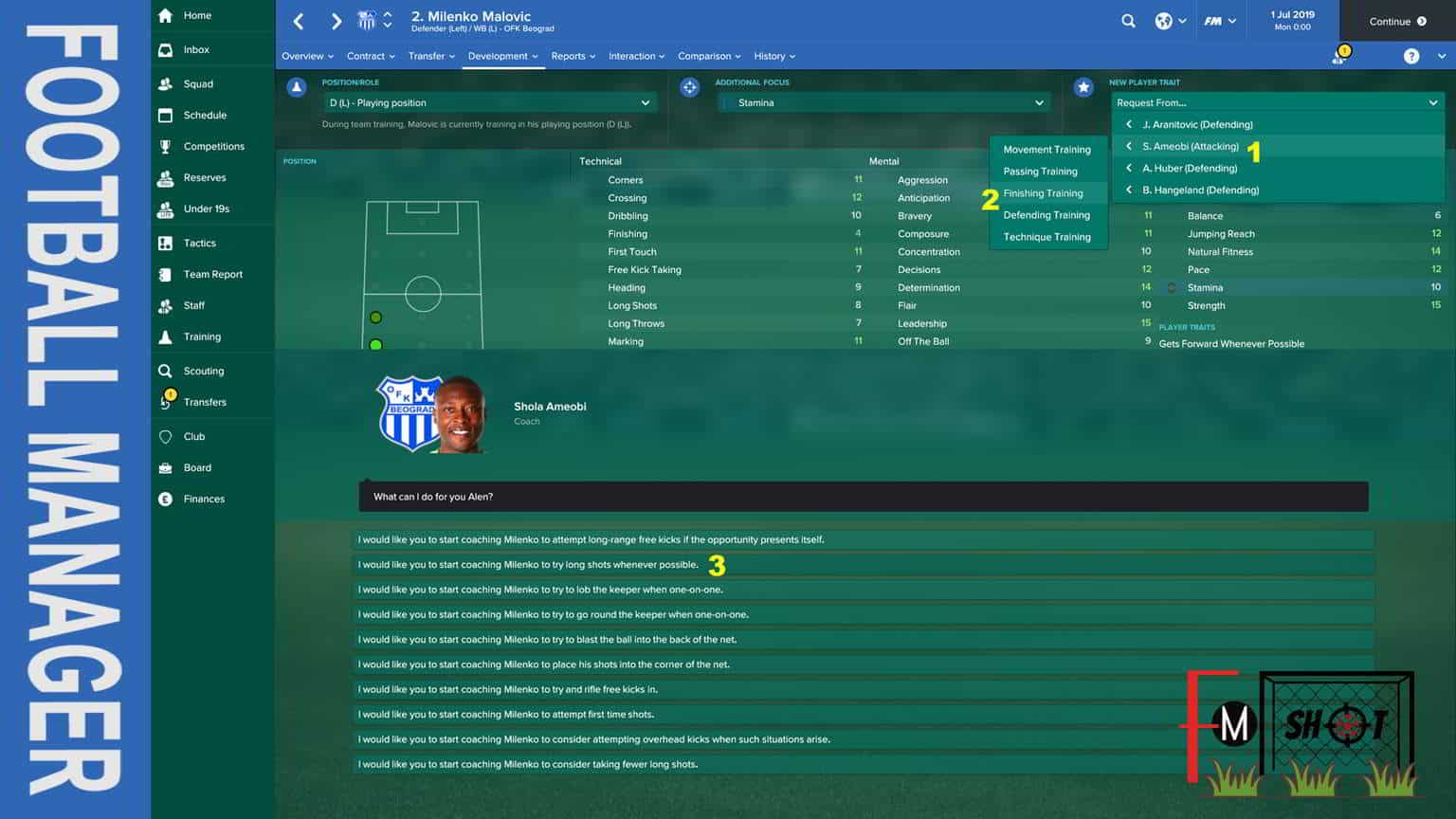 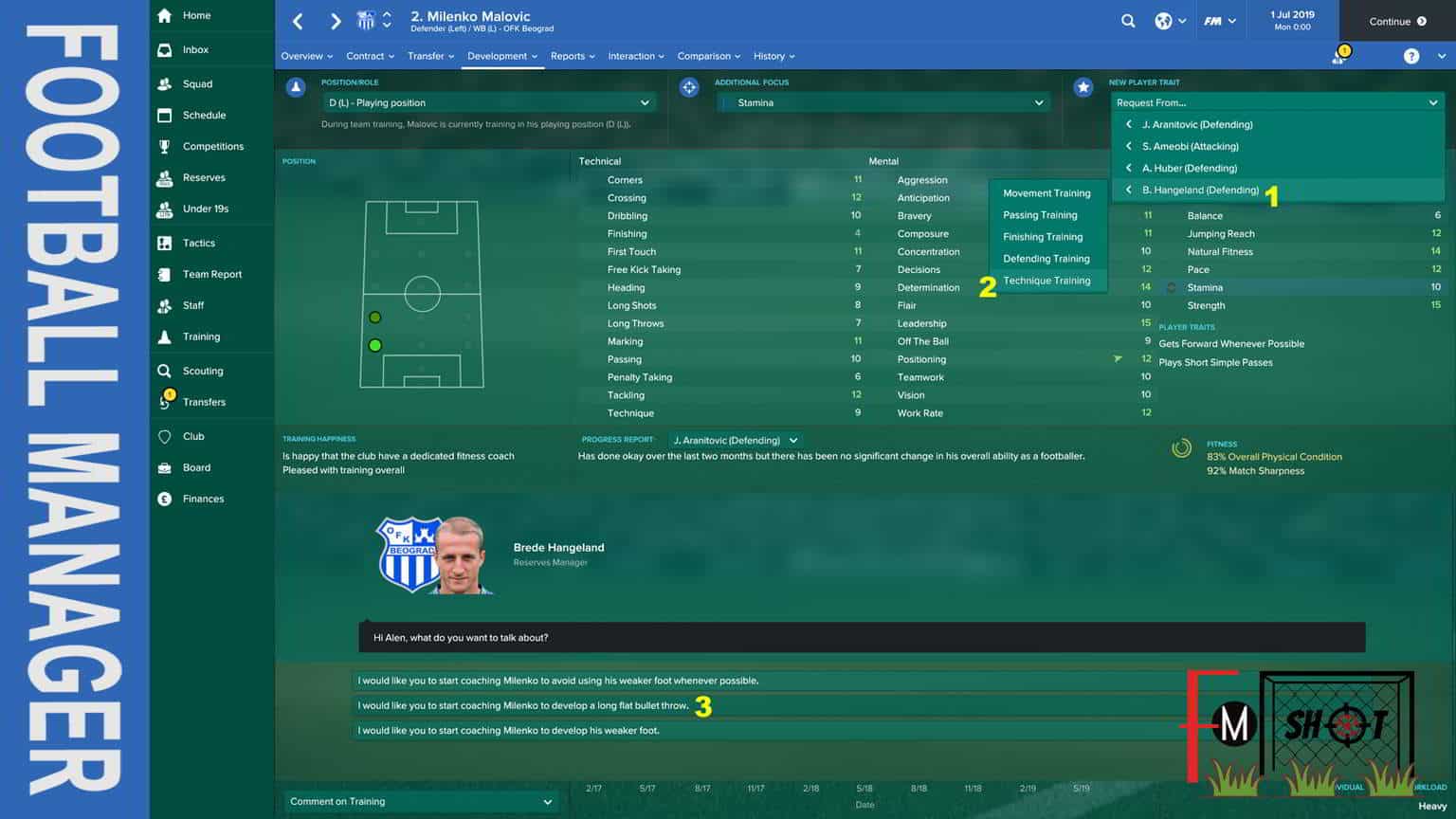 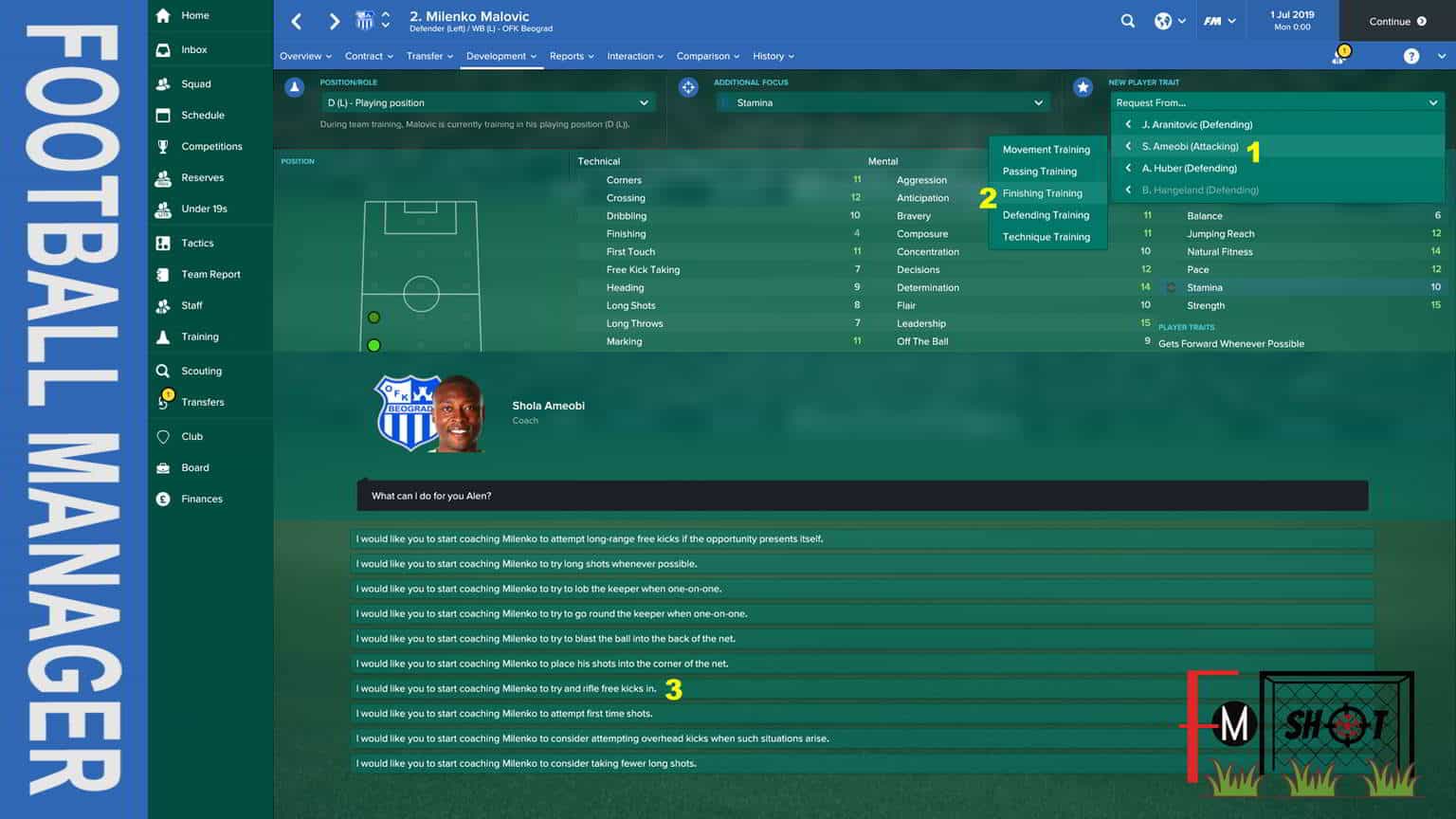 There are even more interesting tasks for the Full Back position, but it depends on style and tactics:

That’s it. If you want to help support me, please leave a comment, like and share this article on your social media. Thank you for your attention and time.