The Story Must Go On – Am I the right man for the Hamburger SV hot seat?

Welcome to Volksparkstadion. After a successful job interview, I got the opportunity to manage Hamburger SV (at least in the game).

Unfortunately, one of my favorite clubs has a big problem. It is on the 14th place in the Bundesliga – the last 5 games without a win.

However, I’ve noticed that this team has great players.

I will mention some of the names that will be the center of my tactics: Lewis Holtby M/AM (C), Alen Halilovic M/AM (RC), and Douglas Santos D/WB (L).

On the other hand, the quality is missing at the position GK, DR, DC, and competition on AMC. But first things first …

Founded in 1887, Hamburger SV is one of the most popular and successful clubs in German football.

The club plays their home games at Volksparkstadion (was demolished in 1998 – replaced with a bigger stadium) and possesses top training facilities and superb youth facilities.

The club also has average junior coaching and an average youth recruitment network.

The club’s most remarkable period started during the 1980s.

Although now enduring a seventeen year barren spell, having not won a competition since 2003, Die Rothosen still have a history of which they can be justly proud. 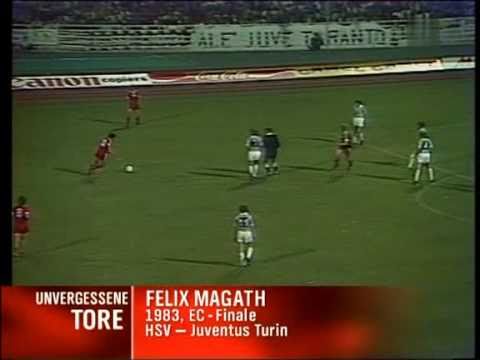 My team for the rest of the season

As I said, this team has a bright future and I don’t understand how they dropped to the bottom of the table.

I chose the first 11 very quickly and brought only one new player.

Currently, the best goalkeeper in the club! What makes this player good is high ratings of key attributes: Aerial Reach 16, Positionig 15, and Agility 15.

The mental side of the player could be better, but ok.

The lack of international experience can easily be solved if he provides 101 % against the strong teams in the league. 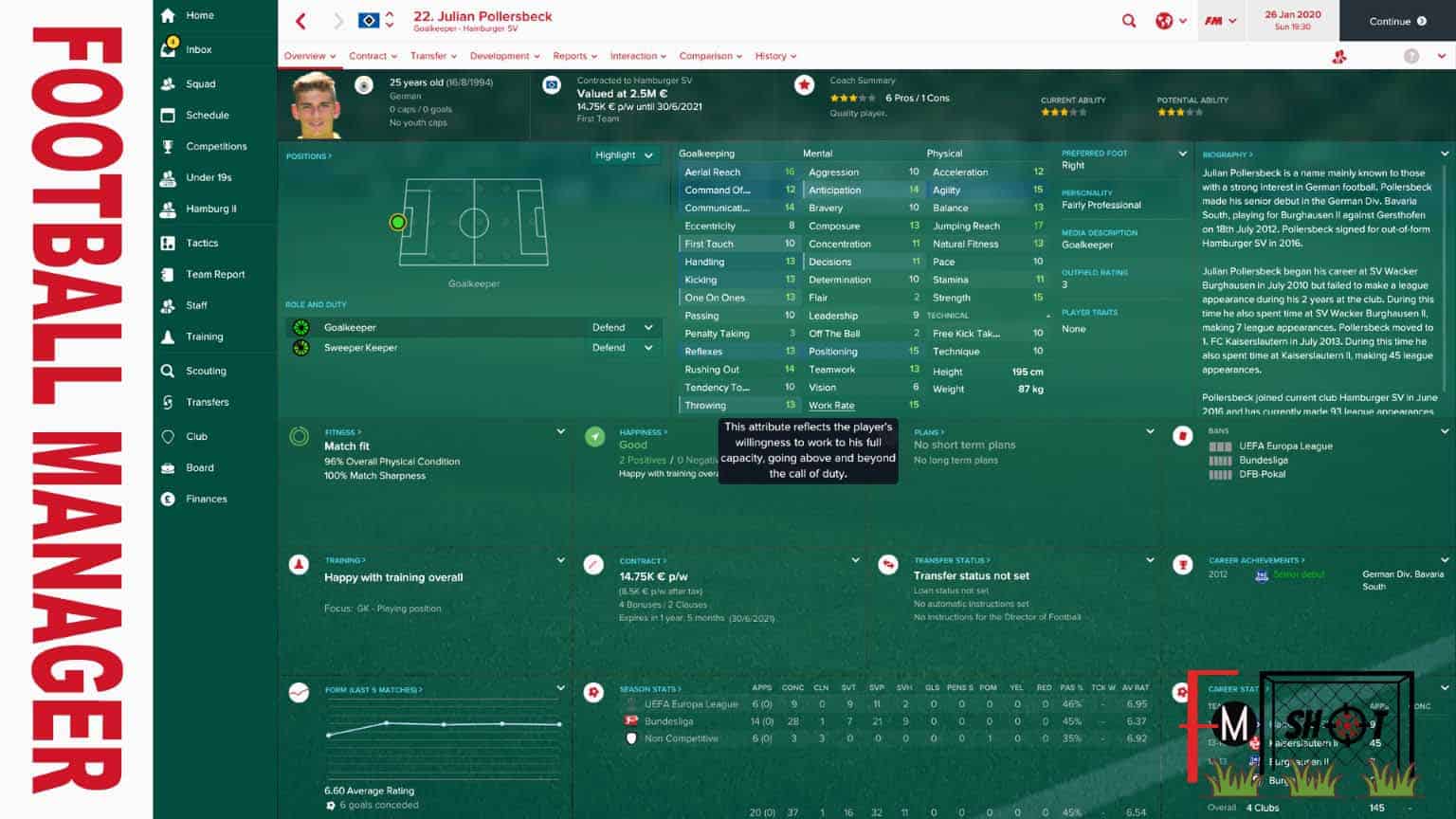 Oliver is a good player, but I don’t have a right substitution for him.

So, it is my task to make a good competition in this position. Until then, he is the boss. 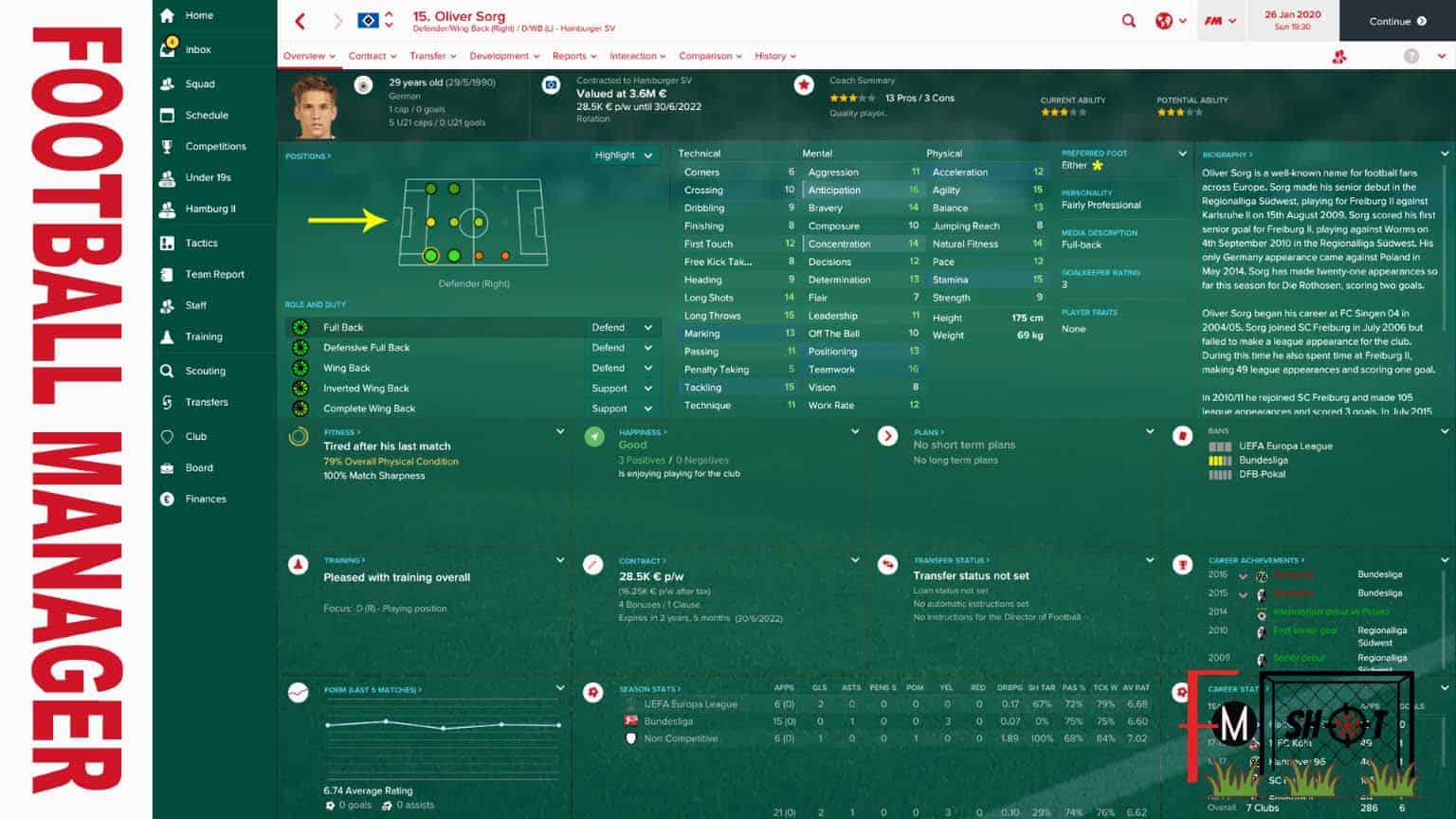 Both players have international experience which is a big plus. Yerry Mina is 193 cm tall and Kyriakos 182 cm.

They are key defense players (regardless of the tactics) and I think they will successfully perform the tasks I assign to them.

I’m well aware that away matches can be difficult for them (the mental side of the player), but there is always an option – change the formation and tactics. 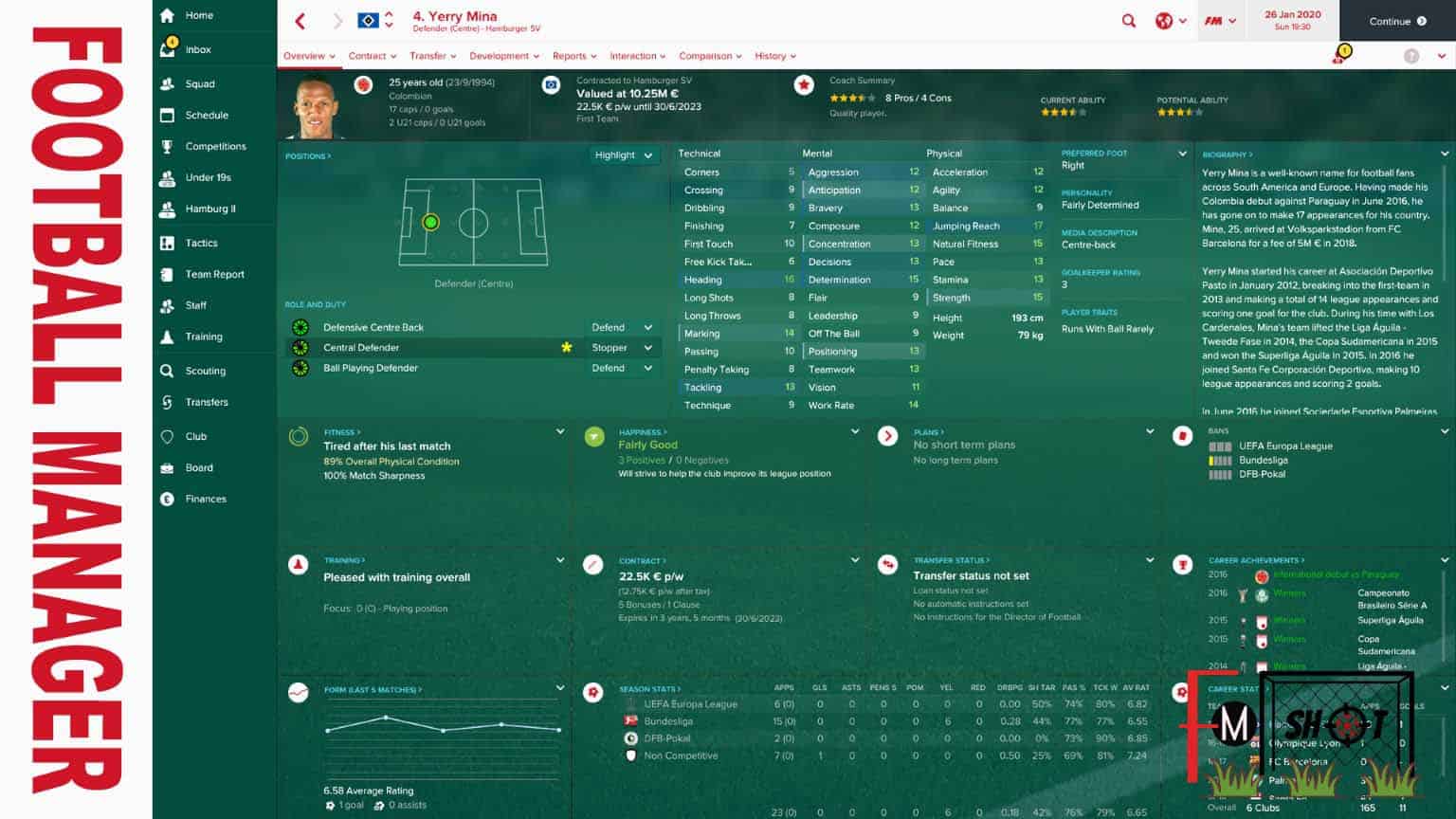 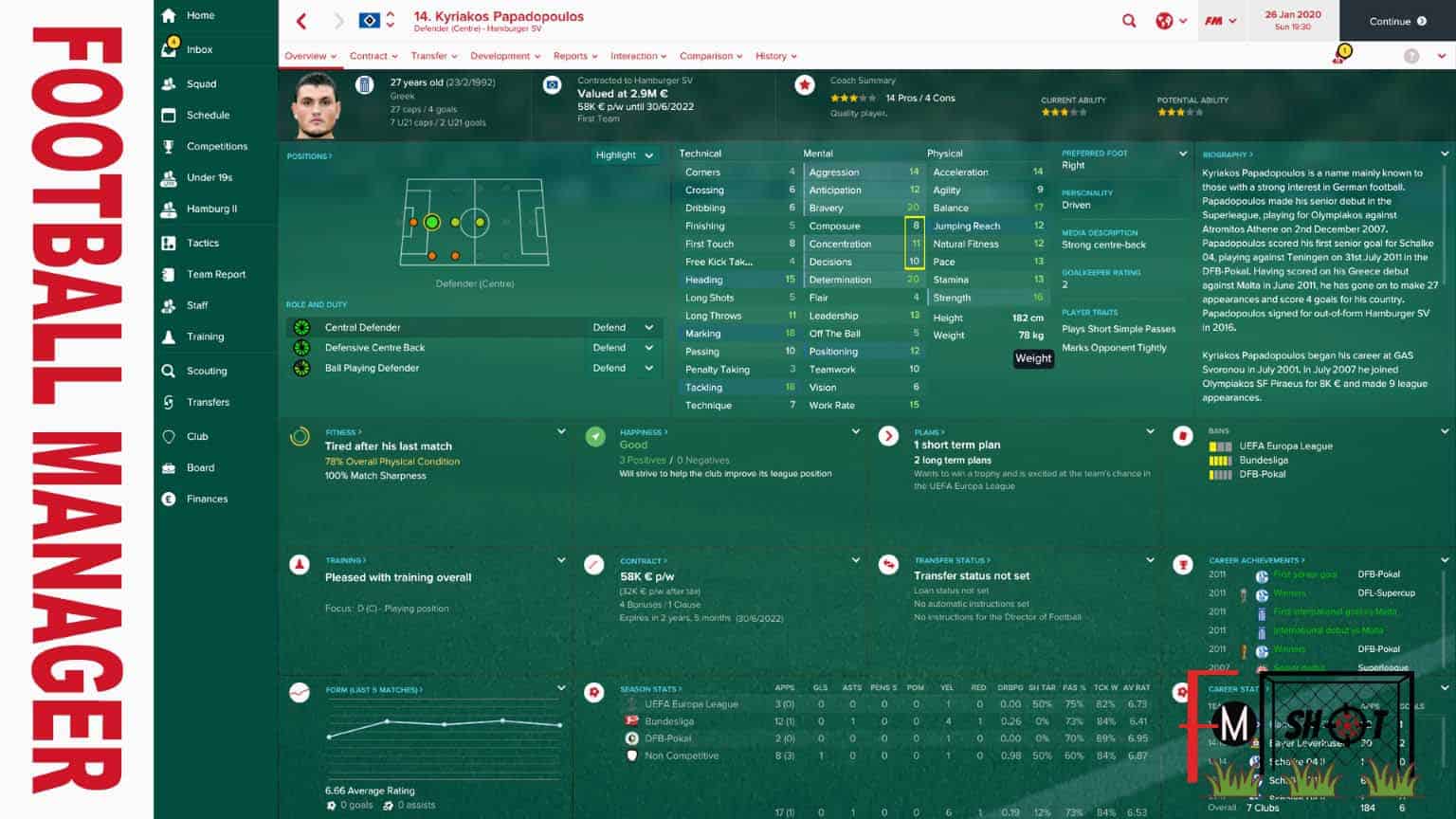 He can make a major contribution to the attack and defense. I’ll try to add another preferred move on his list of “player traits”. 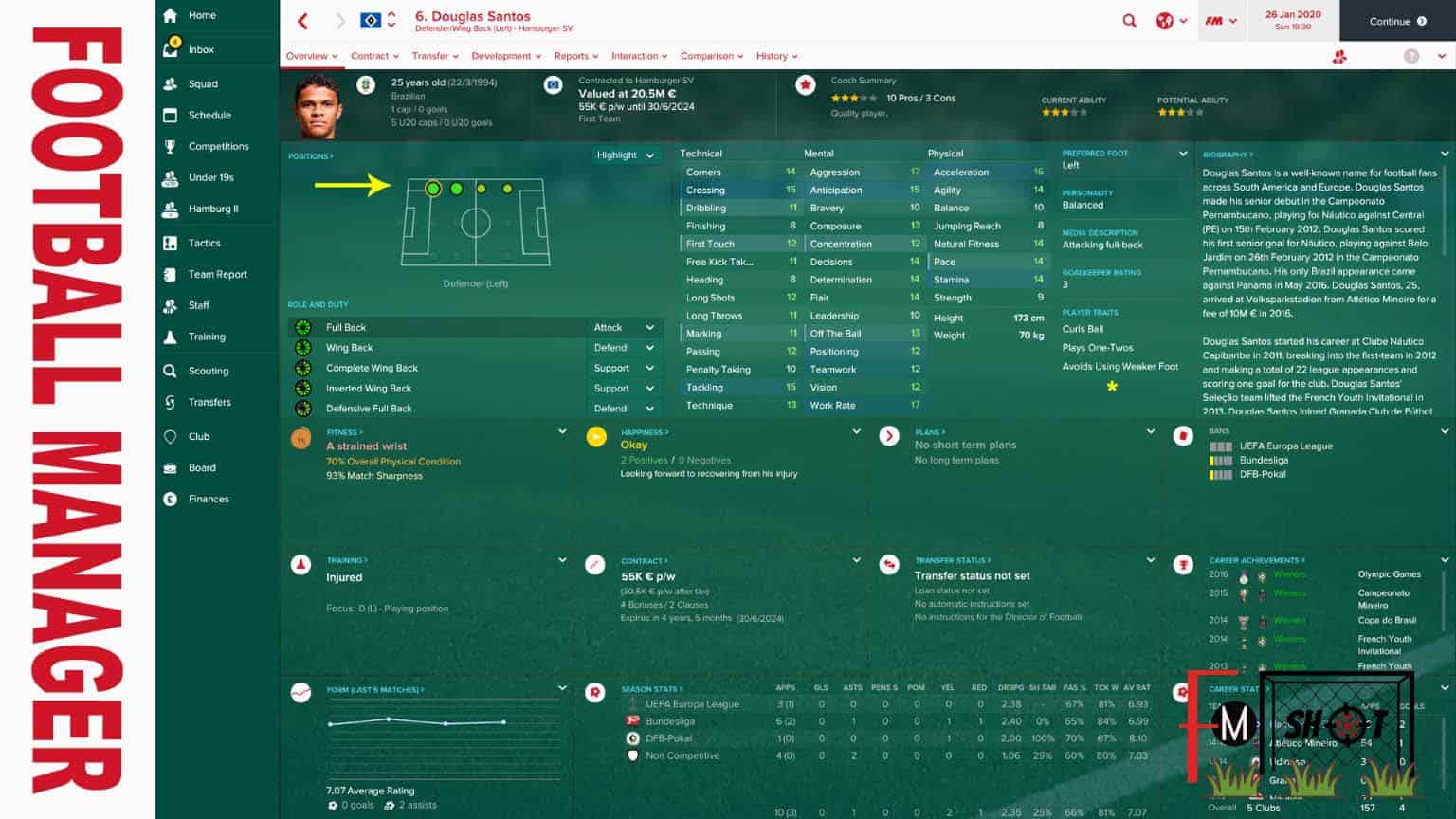 The ideal combination and I would not change anything. Walace has only one task – slow down the opponent’s attack. That is why his ideal role is “Ball Winning Midfielder”.

On the other hand, Holtby is the center of my system because the player has what it takes for a playmaker. 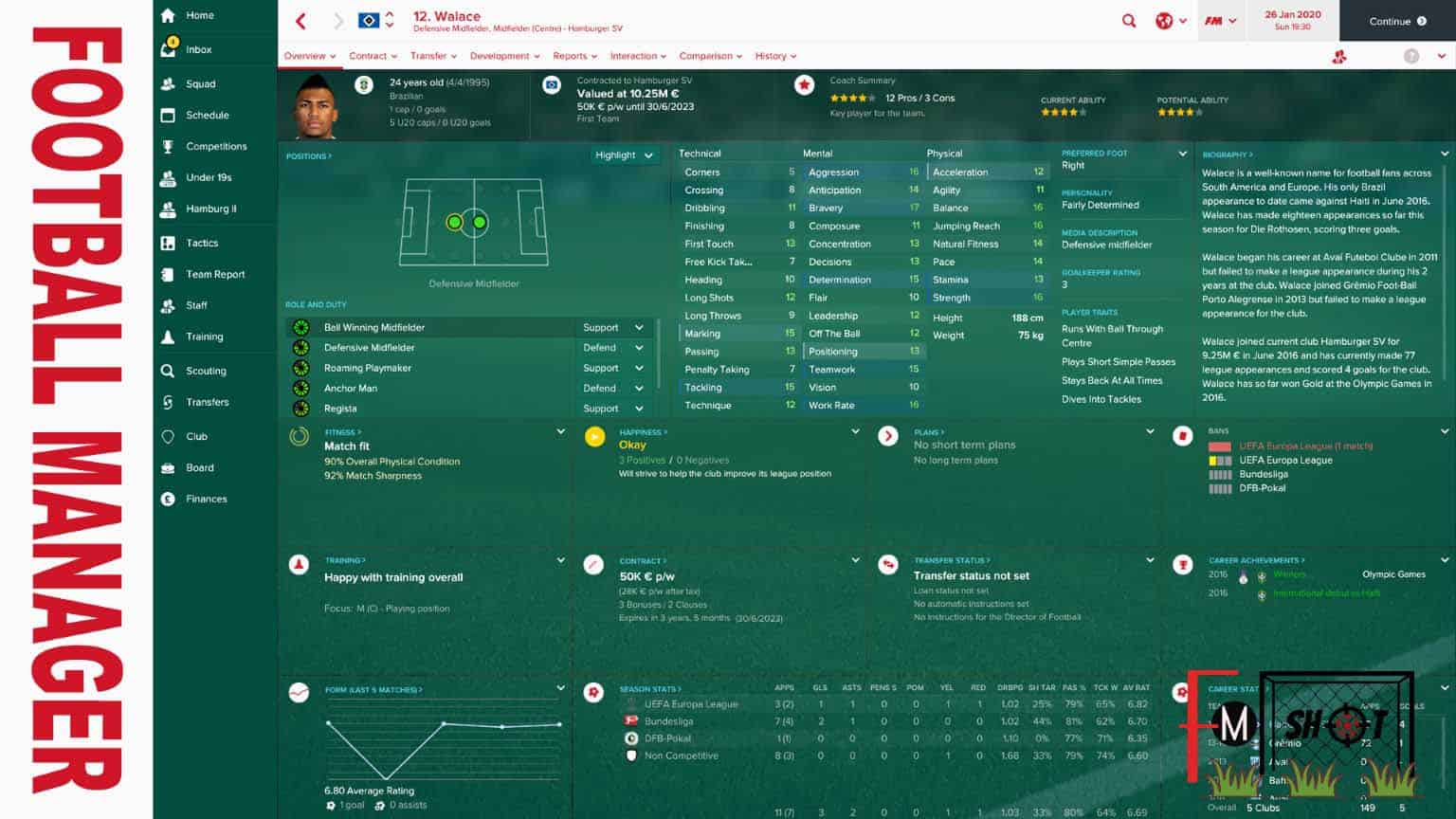 At this position, I have a faster and younger player (Amath N’Diaye 23 years old), but Nicolai has the advantage of having a rich football career – 5 clubs, 404 appearances and 101 goals.

Of course, things can change next season, but for now, he is my main player at the position AMR/MR.

A similar situation as well as in the position of AMR. Although the physical side of the players is a weak (33 years old) creativity and passing are something that makes this player special.

That is why Aaron’s No. 1, but has some serious competition. I brought a player who will attract the attention of the continent’s finest clubs. 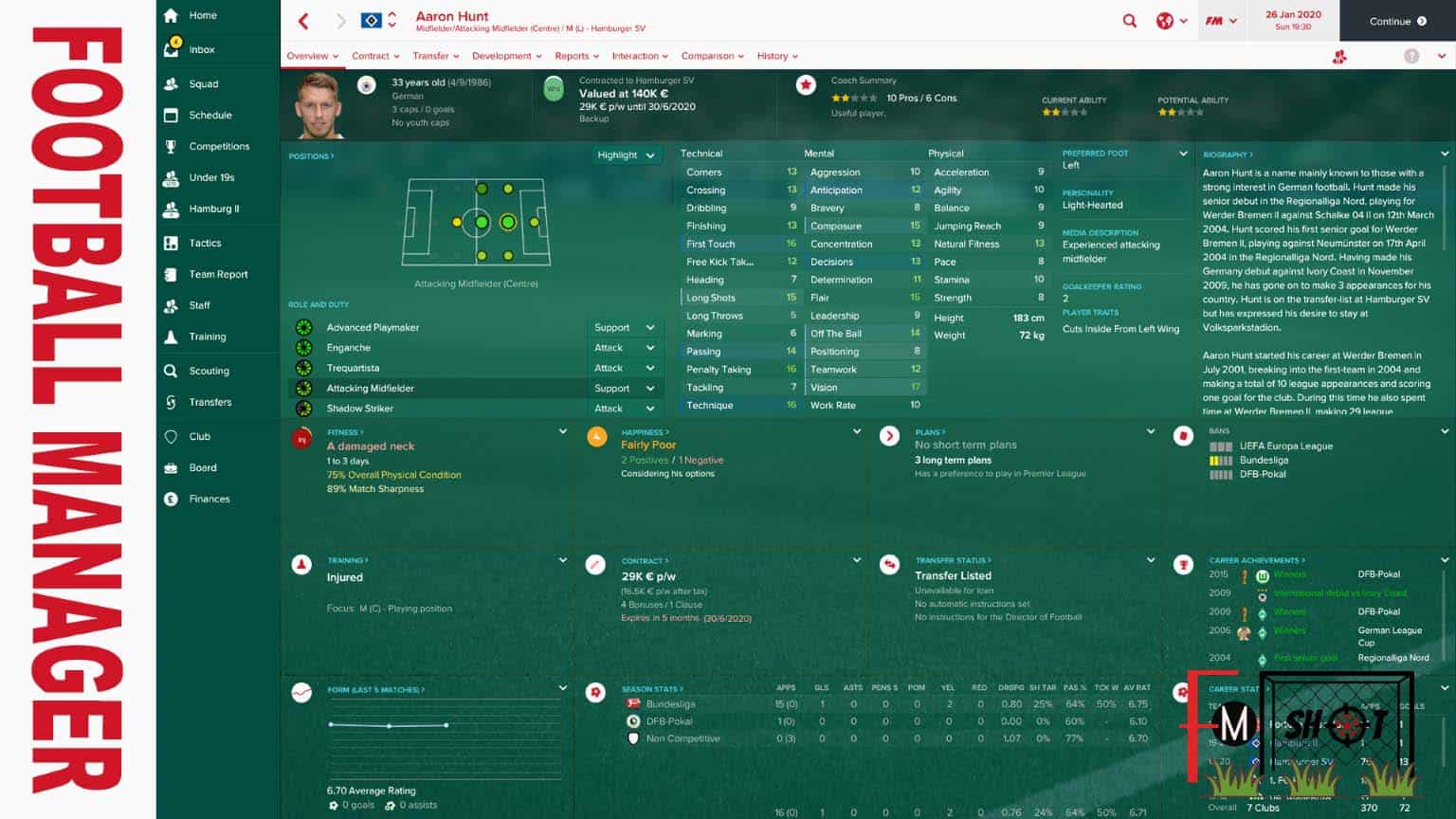 We have the same name so he has to be my favorite player.

I recently read that he moved to Milan and it’s a great move. I would prefer that he stayed in HSV, but okay.

These days the main news is that Ronaldo moves from Real Madrid to Juventus. So Seria A will be interesting for big sponsors and marketing companies. Let’s go back to Football Manager.

If we look FM indicators, Halilovic is a very intelligent player (Flair 18, Vision 16), excellent with the ball (Technique 17, Dribbling 18) and physically well prepared (Acceleration 15, Agility 18). What could be better? 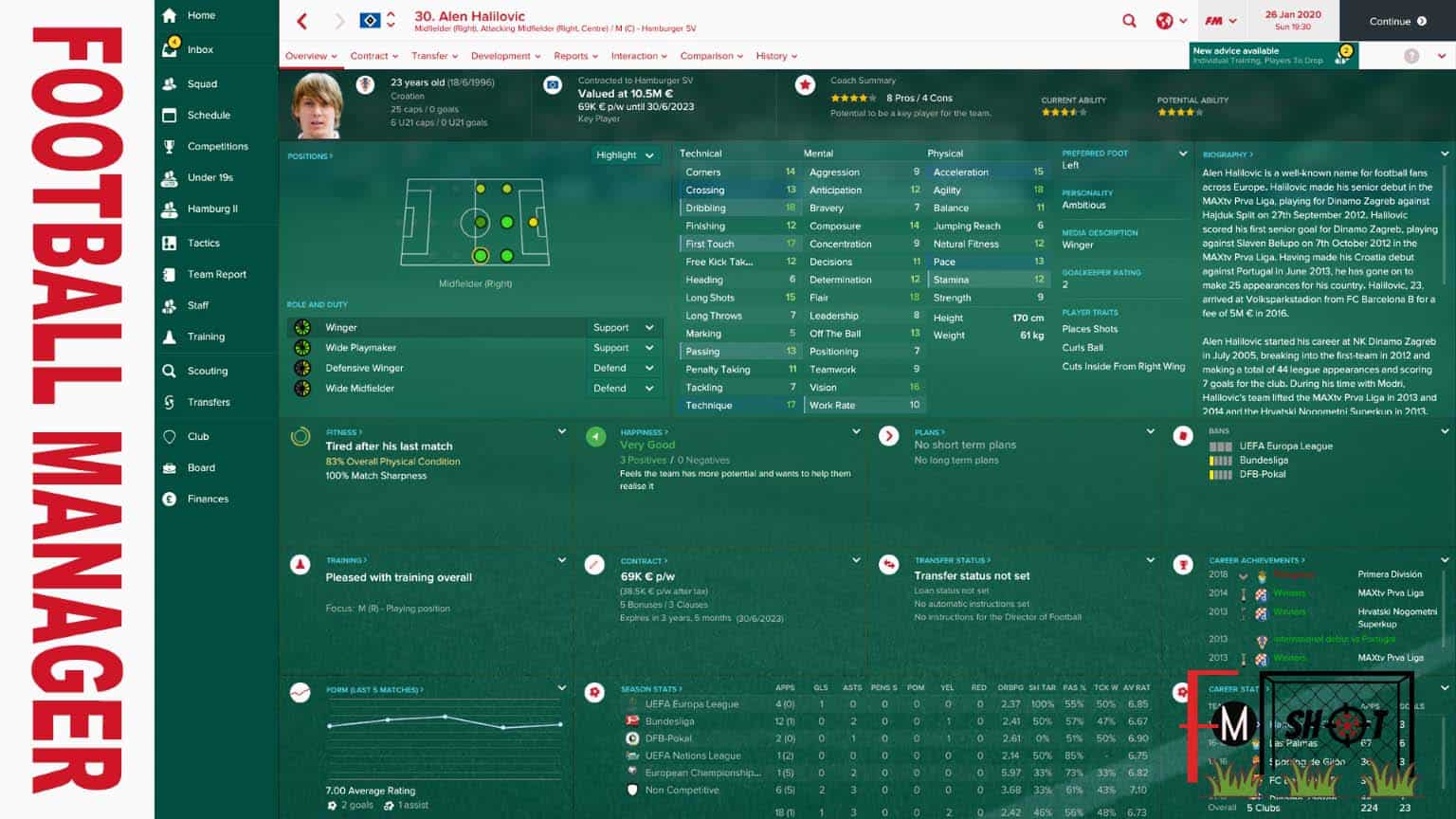 An excellent and powerful striker (Target Man) who is easily scoring goals.

We had 3 friendly matches for the continuation of the season and I’m satisfied with what I saw on the pitch. 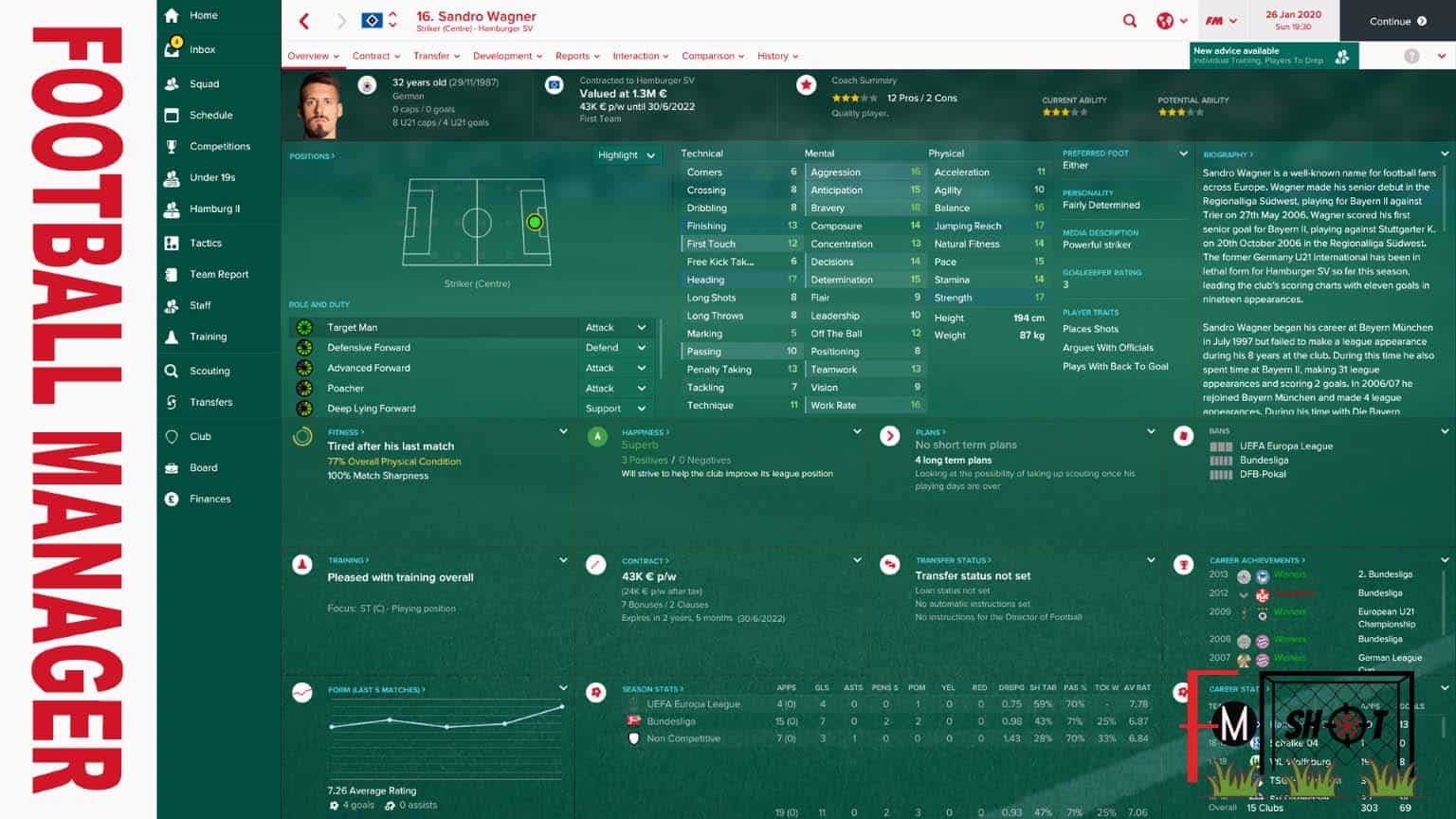 When the pitch is narrow then 3-4-1-2 is the right choice. In both cases, I use a combination of higher tempo and direct passing. But …

There are players who will pull the handbrake (dictate tempo) when needed.

Of course, sometimes I have to “slow down the game” or switch to defensive. In this case, the team is forced to transform into 4-1-4-1.

If you have any doubts about the choice of tactics, I suggest you look at this article. Below you can see the results of friendly matches for the continuation of the season.

The budget is € 15M, but this is a small figure for a big name in the world of football!

After a thorough scan, I noticed two weak positions in the team. These are AMC and DR.

Meanwhile, e-mails began arriving (director of football, scouts, agents and so on) who had the title – the potential transfer targets.

There were a lot of interesting players but one attracted my attention. His name is Salih Özcan (22)! If I had one word to describe a player, it would be – BINGO!

I knew that the realization of this transfer requires a lot of European banknotes.

After lengthy negotiations, Salih moved for € 8.25M, from 1. FC Köln to Hamburger SV.

That’s it. I’ll try to win as many points in the season. The goal is the 10th place! And now … I’m going to play FM, and for you, I have one question.

Does this team have the potential for the top of the table? Thank you for your attention and time.

Who is the greatest footballer in the all-time history of football?
Total Votes: 277
* - added by visitor