The Nitro 50 gaming desktop delivers powerful performance for lag-free gaming and smooth graphics-intensive tasks, with a new 11th gen Intel CPU and a powerful Nvidia GeForce GPU under the hood.

And you can store more of your favourite games and media without worrying about running out of room, courtesy of the 1TB SSD.

The NVIDIA GeForce GTX 1650 GPU, powered by the NVIDIA Turing architecture, delivers up to 6X the performance of previous-generation graphics cards.

This allows the Nitro 50 to handle a wide range of games with ease.

The case of the Nitro 50 is fitted with burning red LEDs that help set the mood for intense gaming sessions and at a mere 18 litres, it can fit neatly on your desk or on the floor.

In spite of this small size, the Nitro 50 has space to add extra components, allowing it to grow with your needs.

The case also comes with FrostBlade cooling fans which, combine with a design that maximises airflow, keeps the Nitro 50 cool even when running the most intensive of games. 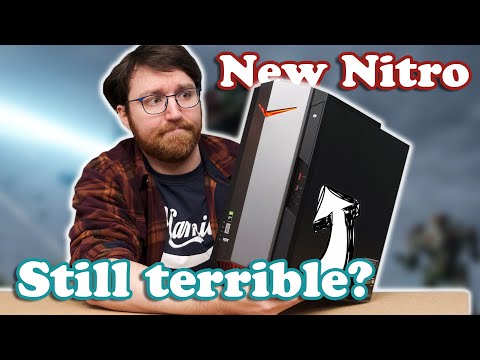 The Nitro 50 features the latest DTS: X Ultra audio technology, which works with your existing speakers or headphones to create a multi-dimensional sound that moves around you like it would in real life.

The Dragon LAN Ethernet connection ensures high speeds, low-latency and no lag. Plus you also have Wi-Fi 6 connectivity built-in, in case you want to avoid the cables.

If you’re in the market for a gaming desktop that has the power to handle a wide range of the latest games then the Nitro 50 is an ideal choice, thanks to the powerful Intel and Nvidia hardware.

DOMINATING PERFORMANCE: Conquer games and tasks alike thanks to an Intel Core i5-11400F processor and 8GB of DDR4 RAM.

STAY COOL UNDER FIRE: Thanks to the Frostblade cooling fans everything will keep running cool and smooth, even during the most intense gaming sessions.

TAKE CONTROL: The NitroSense control centre allows you to monitor and manage temperatures and fan speeds, so you can get everything running just right.

PLENTY OF STORAGE: Easily store all your games, apps and files thank to the 1TB SSD.

There are no reviews yet.