How To Play Football Manager From Scratch

Welcome to AS Roma. After spending two seasons at Brescia, I have decided to take it one step further in my career.

A new adventure brings ambitious goals, one of them being the Champions League qualification.

This will be an odd FM story as I will try to describe in detail the system I apply when taking over a new club.

In case you are playing football manager for the first time and don’t know “how to set up your save”, I suggest you take a look at this article. 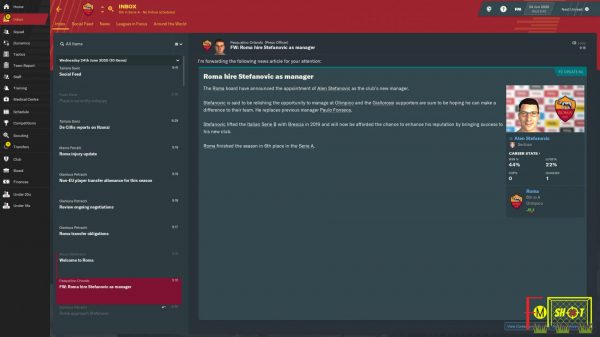 An ideal opportunity to present yourself in the best way by scheduling a press conference, learning more about the history of the club, and getting a report on key players by an assistant manager.

Welcome to Giallorossi. I’d like to take a few minutes of your time to welcome you to the cub before handing over to your head of youth development, who is going to discuss staff responsibilities with you.

I also want to assure you that you have the full backing of the board and we wouldn’t have hired you if we didn’t feel that you were the right person to propel the club forward.

Great, let’s get this meeting started. I’m looking forward to working with this club and achieving big things.

I also appreciate you taking time out of your busy schedule to welcome me in person! 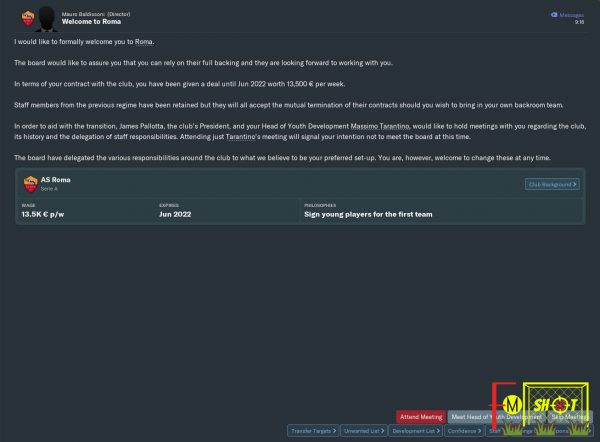 Roma have 50 staff members, but only few of them can stay at the club.

Most have accepted the “mutual termination” option because they didn’t meet my criteria.

It is very important to be surrounded by people smarter than yourself. So I lost a couple of hours searching for good professionals for leadership positions at the club:

I would praise Dean Whitehead who made a fantastic result this season. It’s a sign that some kids deserve a chance to be part of the first team.

Before that, they have to spend some time in the Under 20s squad to be ready for the challenge that follows.

Detailed candidate selection process, I have explained in the Brescia example where I’ve shown the system for finding good football experts (more info).

In the end, the delegation of staff responsibilities remains.

The aim is to choose the best 11 regardless of squad status.

I look at the little things such as height and weight, personality, preferred foot, player traits, international experience, past injuries and position in the team.

I give preference to older players because I find that they can more easily handle the pressure on away matches. 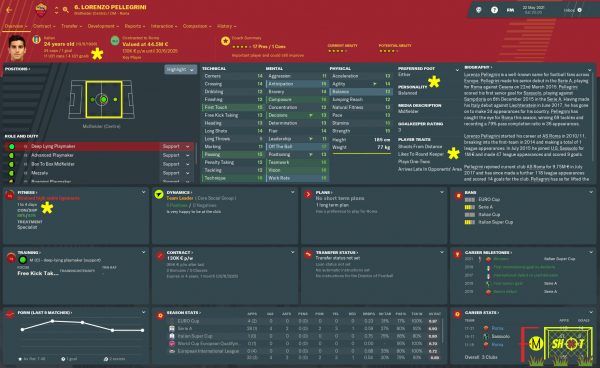 When it comes to young players (Under 20s & 18s), most of them end up on the transfer list, and few go on loan to another club.

The plan is to keep the best of the best in Roma until the age of 20 years. Why?

The first team has 22 players, but due to frequent injuries, the kids get a chance. Rotation is the key to success! 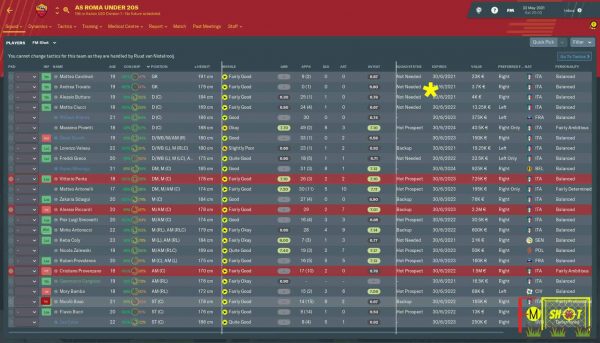 The hard part of the job has been completed and now is the right time to introduce myself to the players as the new Roma manager.

The meeting can be held on 20 July.

Roma is a big name in the world of football so the USA and China are interesting destinations for hosting friendly matches or a tournament.

We need to pay attention to marketing activities and jersey sales. But that’s not all …

Roma received an invitation from Bayer 04 Leverkusen to visit BayArena and a similar offer was sent by FC Köln. I said, why not?

It’s nice to play in Germany.

If you need help with the organization of friendly matches, this is the page for you.

The first task is to find the key players on the team, which is very easy when you play Football Manager for many years.

Then I choose 3 formations that I think will give the best results during the upcoming season. 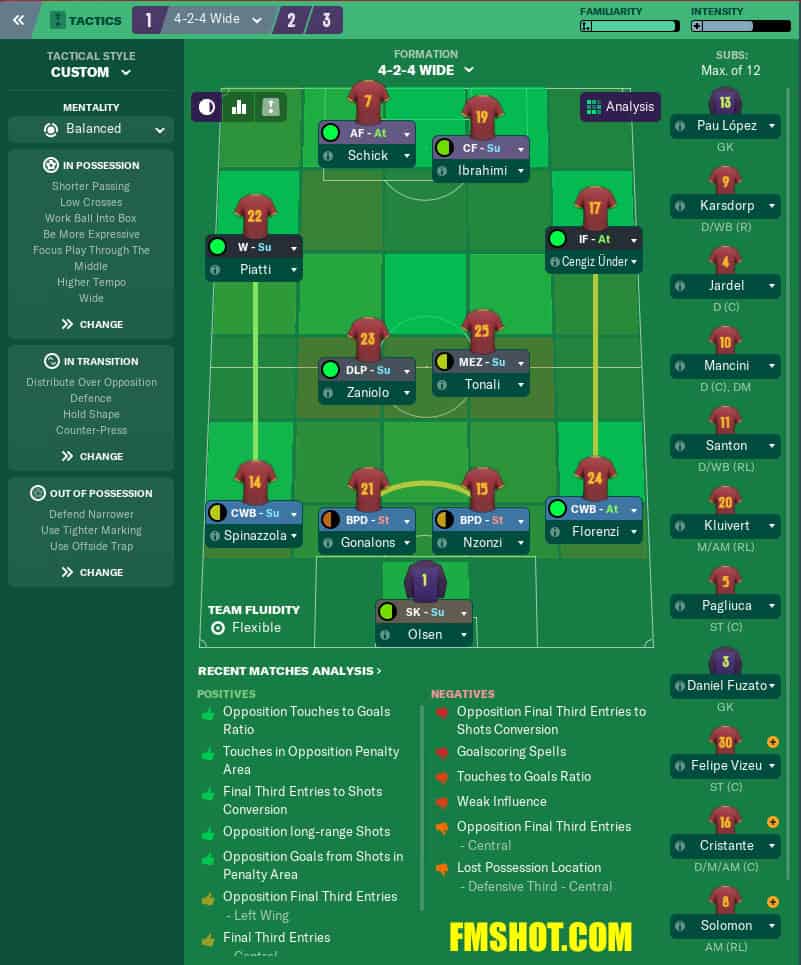 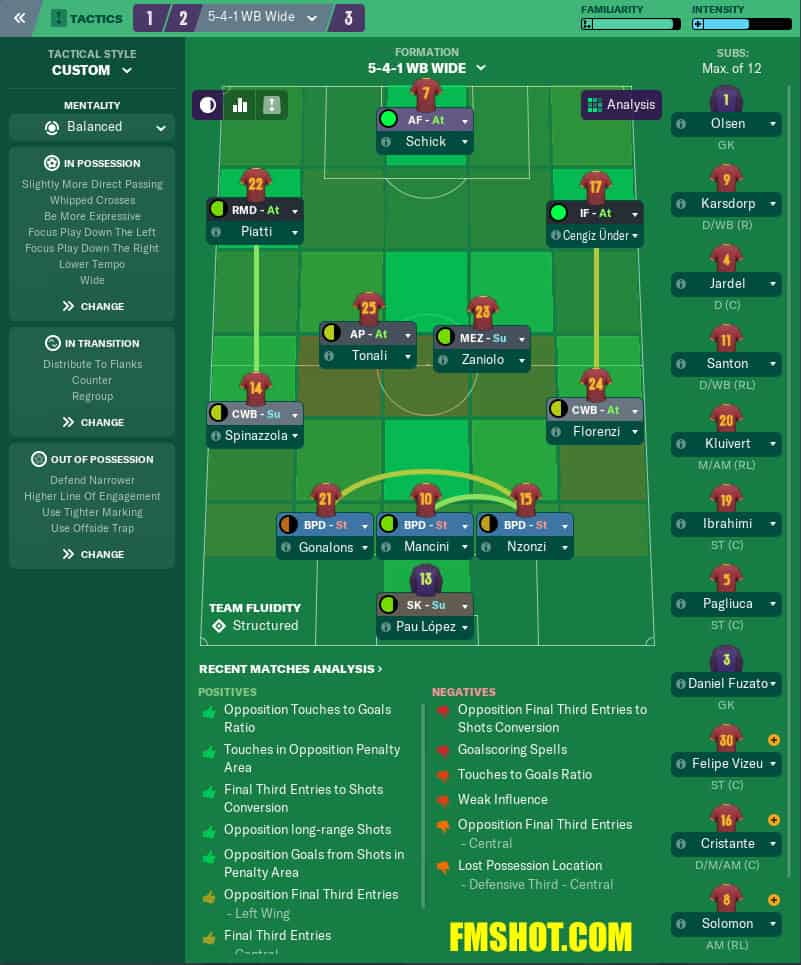 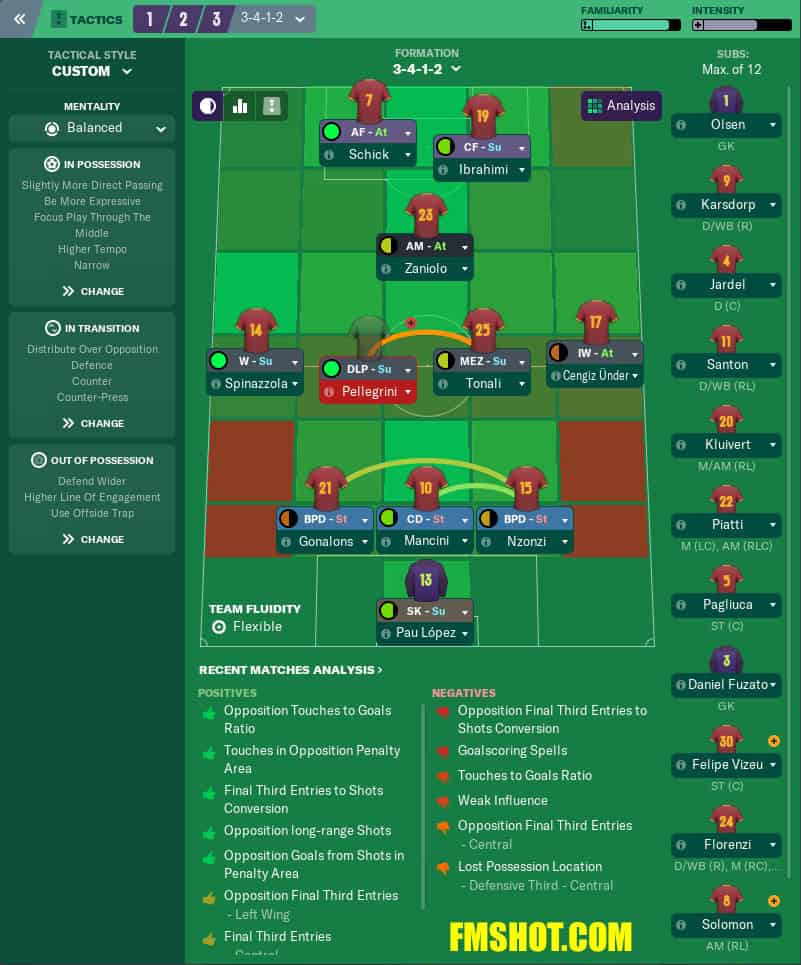 As you can see, Maxime Gonalons and Steven Nzonzi play on the CD (L) & CD (R) even though their primary position is DM.

There are no better options right now, with Federico Fazio and Jardel waiting for their chance off the bench.

The fact is, I have top scouts at the club, but they are currently wandering around the world.

I admit the mistake and you will now see the tasks I assigned to them.

Their scouting knowledge of a particular country or region has increased by 2% annually. It is not commendable … 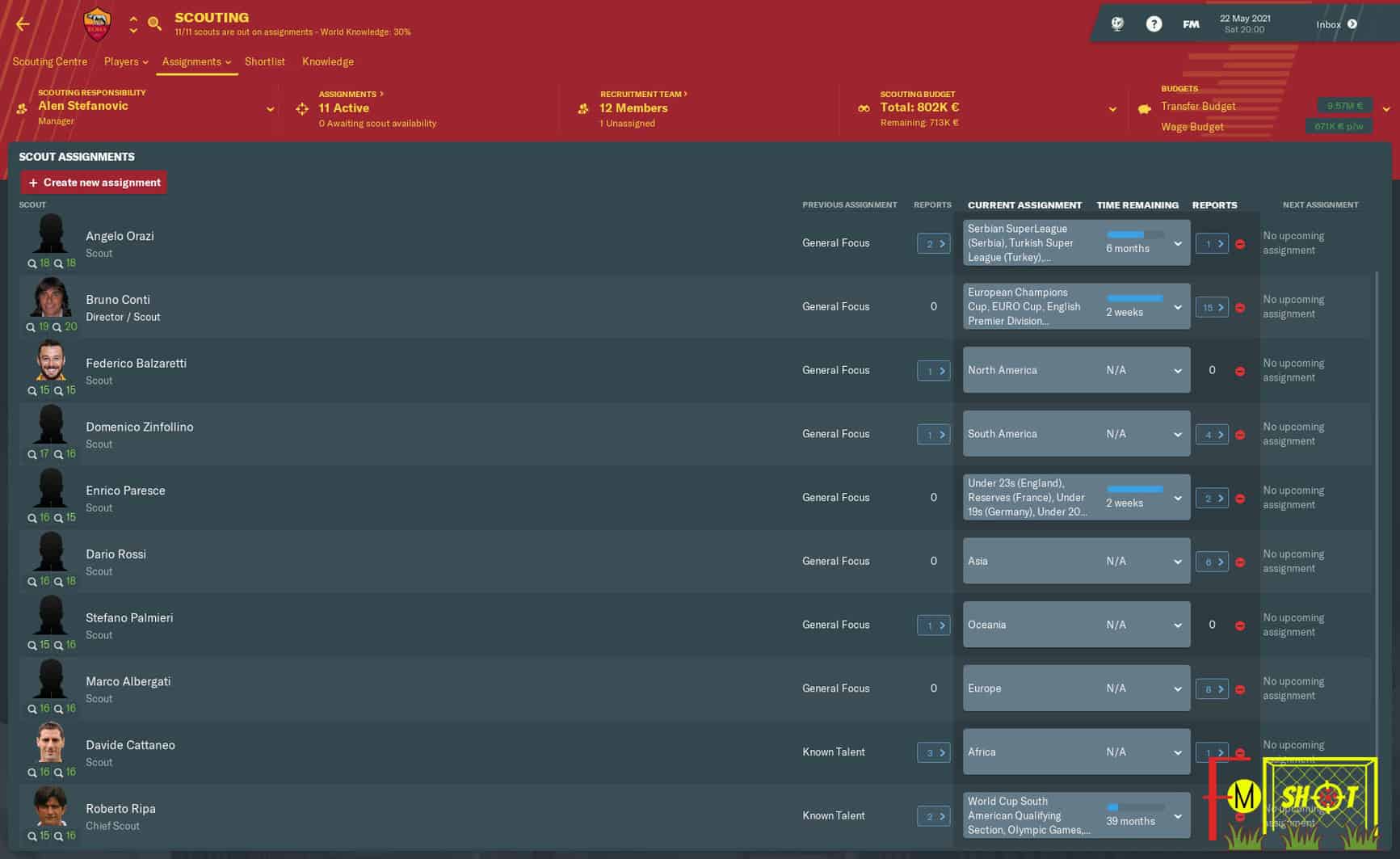 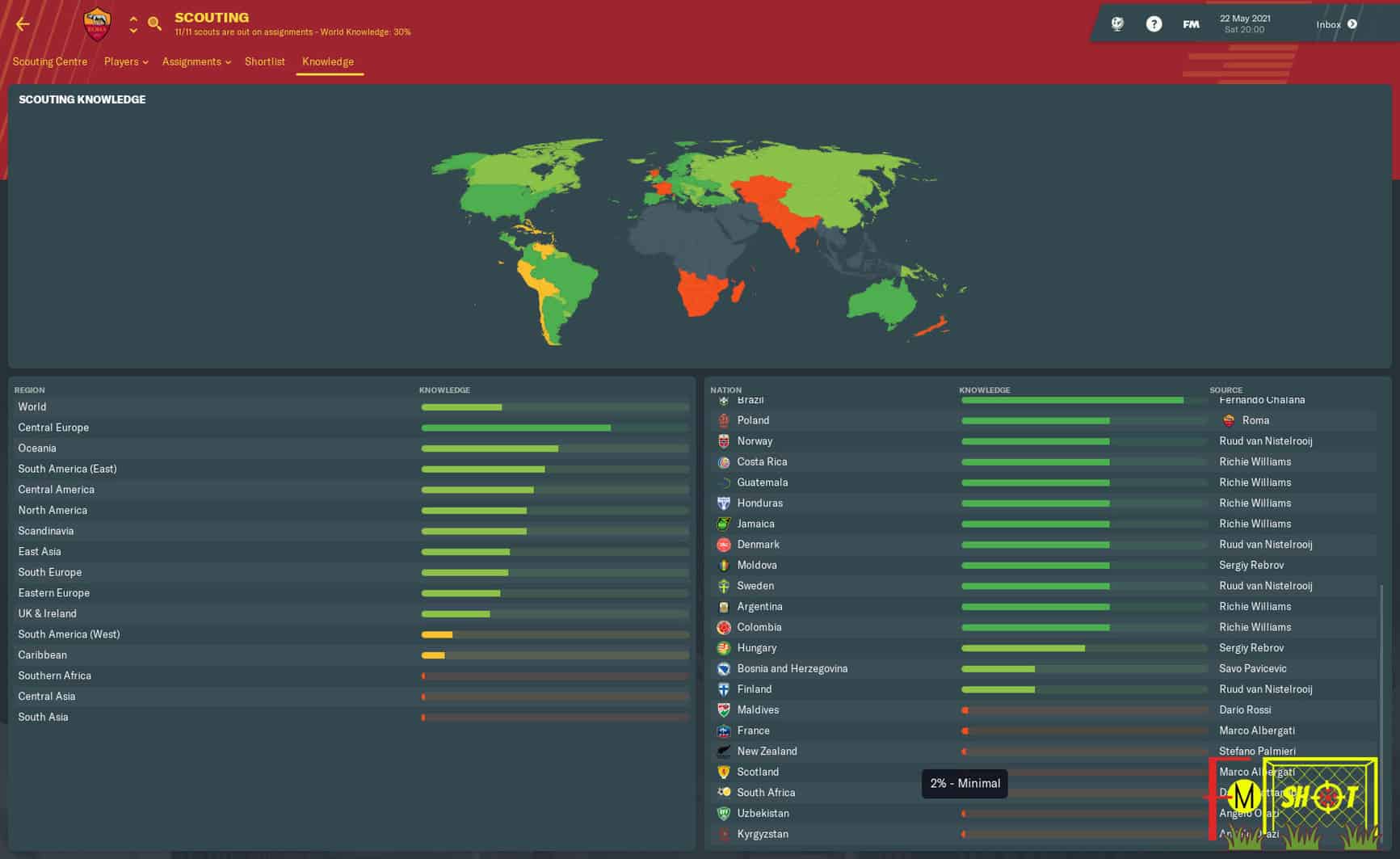 However, they do their job perfectly in Italy!

Thanks to them, I was able to bring in 3 young players that will be discussed in more detail next season.

I love the 80/20 rule, which means that home players have an advantage over foreigners.

Choose AS Roma Captain For The Season

A captain must be a person with extensive football experience and good attributes – Leadership and Teamwork.

The right moment for the selection of captain and vice-captain is the beginning of the season.

Then I get a message in the inbox and the entire process is completed in a few seconds.

It is important to use the “Warn X Player About Losing Captaincy” option if major changes occur, then press Confirm. 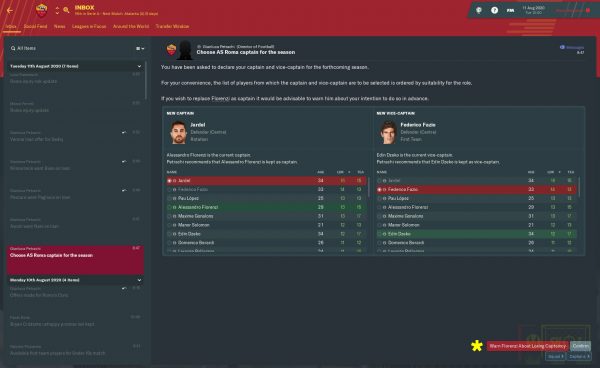 The players will accept my decision and the atmosphere in the locker room will not be disturbed.

There is another way to select a captain, and that’s Tactics → Captains. 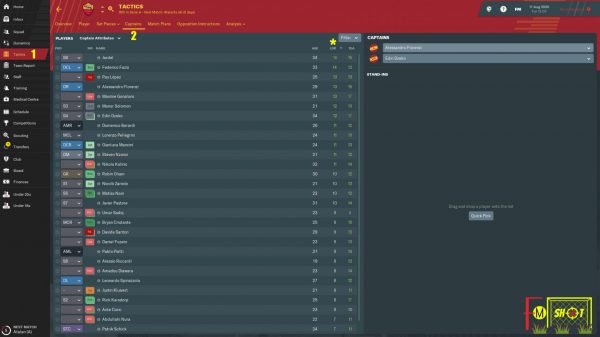 As Brescia’s manager, I didn’t pay too much attention to training.

I used the existing schedules that are given in the game such as defense, attack, possession, set-piece, big match preparation, etc.

However, I noticed a lot of player dissatisfaction because the training workload was LOW.

Then I decided to put some of my ideas into the whole story.

A very interesting topic that deserves a new article on this blog. Although I prefer the old training system that was popular on FM 17.

Overall, Roma didn’t have a team that will be just as good on several fronts. First of all, I think of competitions such as the Italian Cup and Europa League.

The goals are set high and there is very little money in the account. Then came a hellish week.

Priority has been Napoli, which is why I rested the key players in the team, and the B team played against Atalanta.

We lost the match by a score of 0-1 but I managed to beat Napoli. 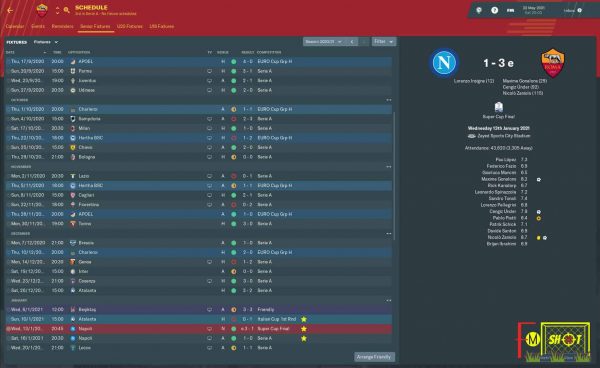 Another critical moment happened during the season.

I was very angry that we dropped out of the Europa League, and three days after that we experienced a new defeat against Fiorentina at home.

My job status has been “INSECURE” and this was a sign that major changes must occur.

It is interesting that his answer after every criticism – I’ll be better next time.

The Fine 2 Weeks Wage penalty followed and he was immediately placed on the transfer list.

The reason is, as I stated poor form, and the last 2 matches have accelerated his departure from the club. 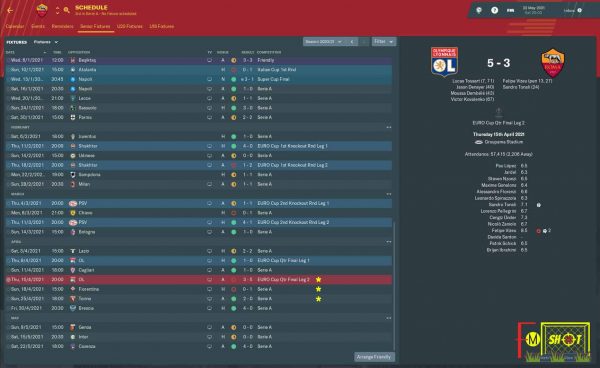 A few days later I received an offer from D.C United (EUR 5.25 M) and accepted without thinking. The move upset the players as well as the fans.

The next match we played against Torino and won 2-0 (A). 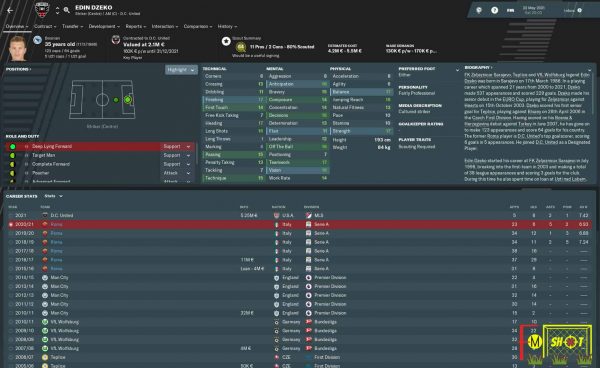 Thereafter, the formation 4-2-4 received a major improvement on “Work Ball Into Box & Low Crosses” so the Olimpico remained impregnable fortress until the end of the season.

It’s hard to write an article that will cover all segments of the game such as Football Manager.

I can freely say that this is the first half as it lacks features such as Team Talks, Affiliate Clubs and Training.

I will do my best to cover these topics as soon as possible, and in the end, it remains to see the Serie A and Roma performance in other competitions. 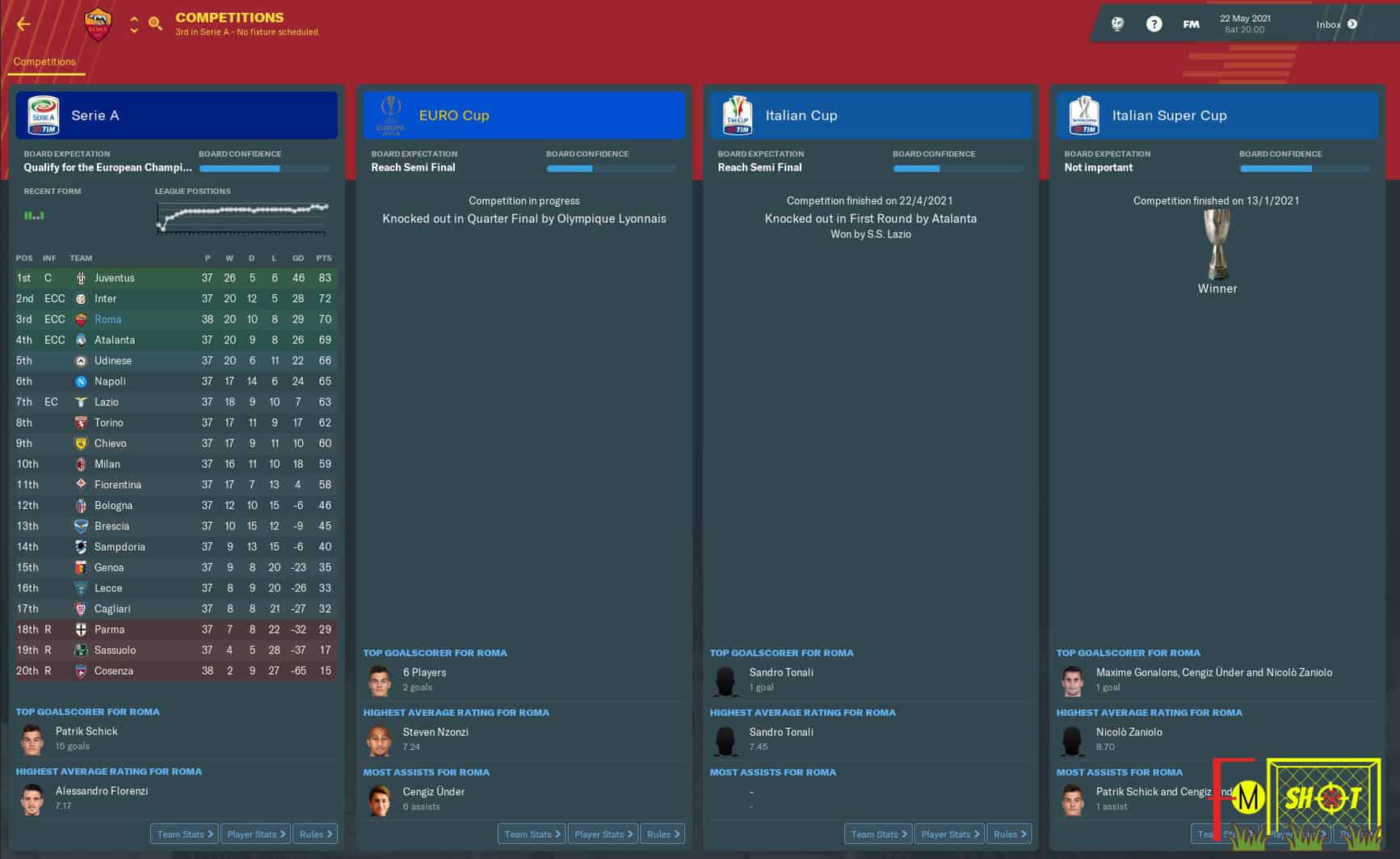 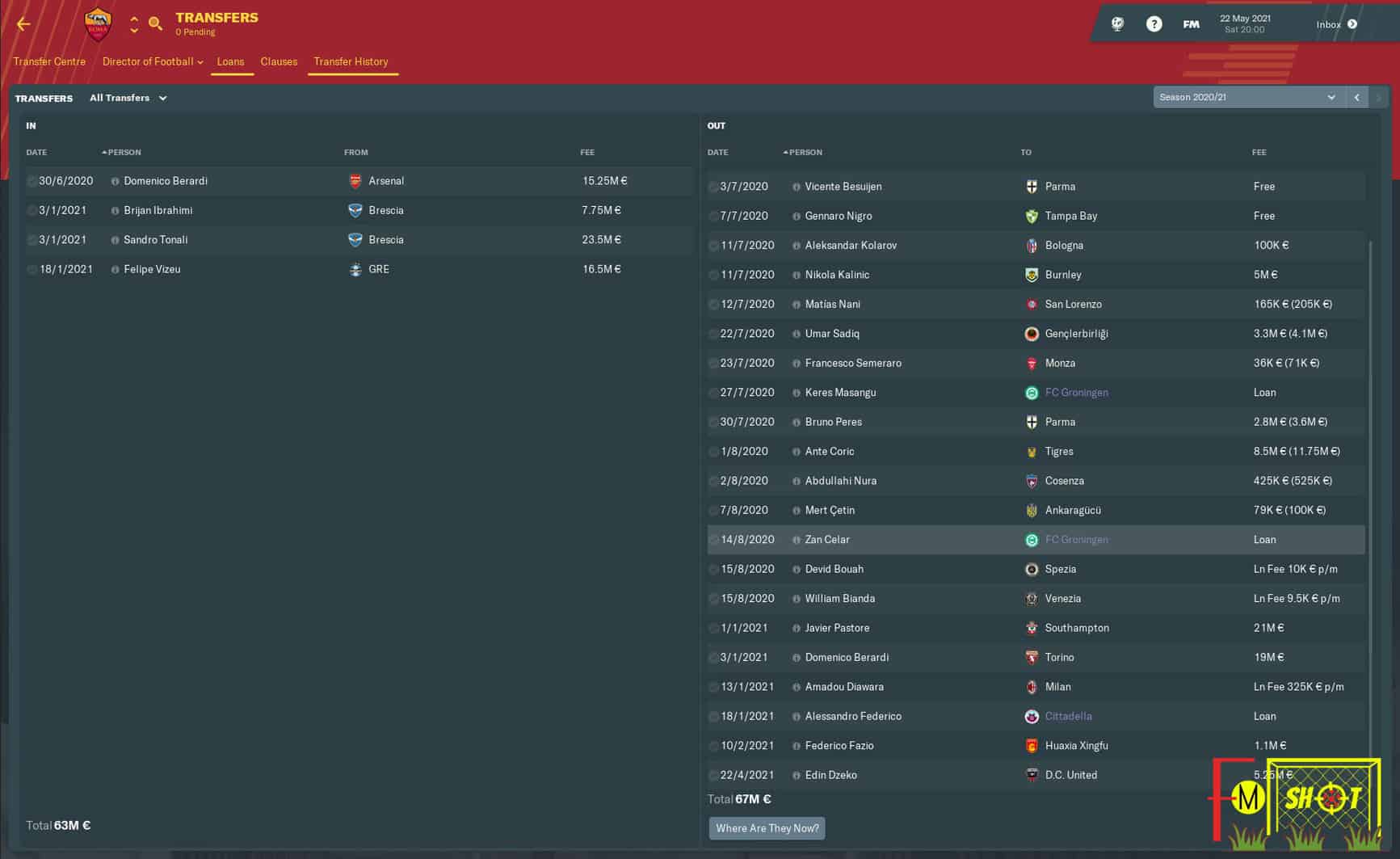 I have great experts in the backroom team, a great atmosphere in the locker room but without the right reinforcements in the DL (Leonardo Spinazzola) and AML (Pablo Piatti) positions, we are unlikely to make a positive impression in the Champions League.

The expectations of the fans are high and I can already feel the pressure on my back. Thank you for your time and attention.