After a long break, I’m starting a new adventure with my favorite club – FC Partizan Belgrade.

You can’t see the indescribable joy and smile on my face, but expect the unexpected when it comes to this story.

There’ll be ups and downs, smiles and frowns.

For a moment, we will return to reality to meet the ardent fans who create an amazing atmosphere.

They are “Grobari – The Gravediggers ” better known as “The Black and Whites”. 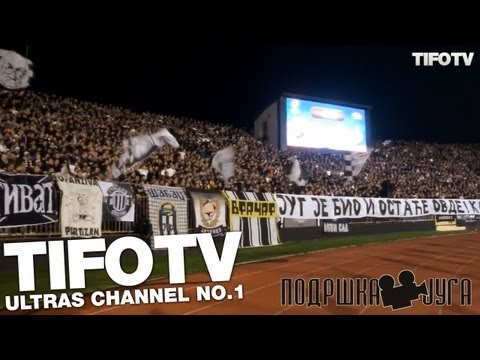 It is time to return to the European scene

Partizan is a club with a rich history and is one of the biggest clubs in the Balkans.

It is normal to expect ambitious goals and huge pressure, but also winning the SuperLiga and/or the national cup will not cause much euphoria among the fans. Why?

It can’t be a “surprise” when you drive the best car in the country, and the fierce rival (Red Star) is the main obstacle on the road.

That is why Europe is a measure of success …

My plan is for Partizan to become a regular participant in the Champions League, because in this way big transfers are realized, the club’s reputation goes up, and the fans are looking for an extra ticket for the next match.

It sounds like a fairy tale, but it is not an impossible mission.

The first step is to give young players a chance and prevent them from going abroad early.

The FC Partizan Youth School is the best in Europe and it is the biggest strength of the club.

Every time you sell a talented player below the market price, you’re shooting yourself in the foot. And how much is a player worth?

As much as someone is willing to pay, and it often has nothing to do with the number you see next to the player’s name. 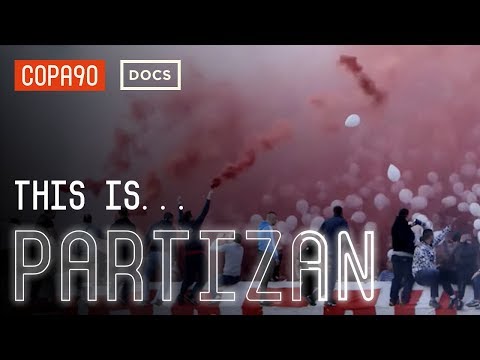 The second step is to surround ourselves with smarter people than ourselves (backroom staff) provided we take care of the budget.

I found the best coaches and assistants using cheap tricks, and these are the options – Club Info and the “favorite club/staff” search filter.

In this way, I create a family that lives for Partizan 24/7… 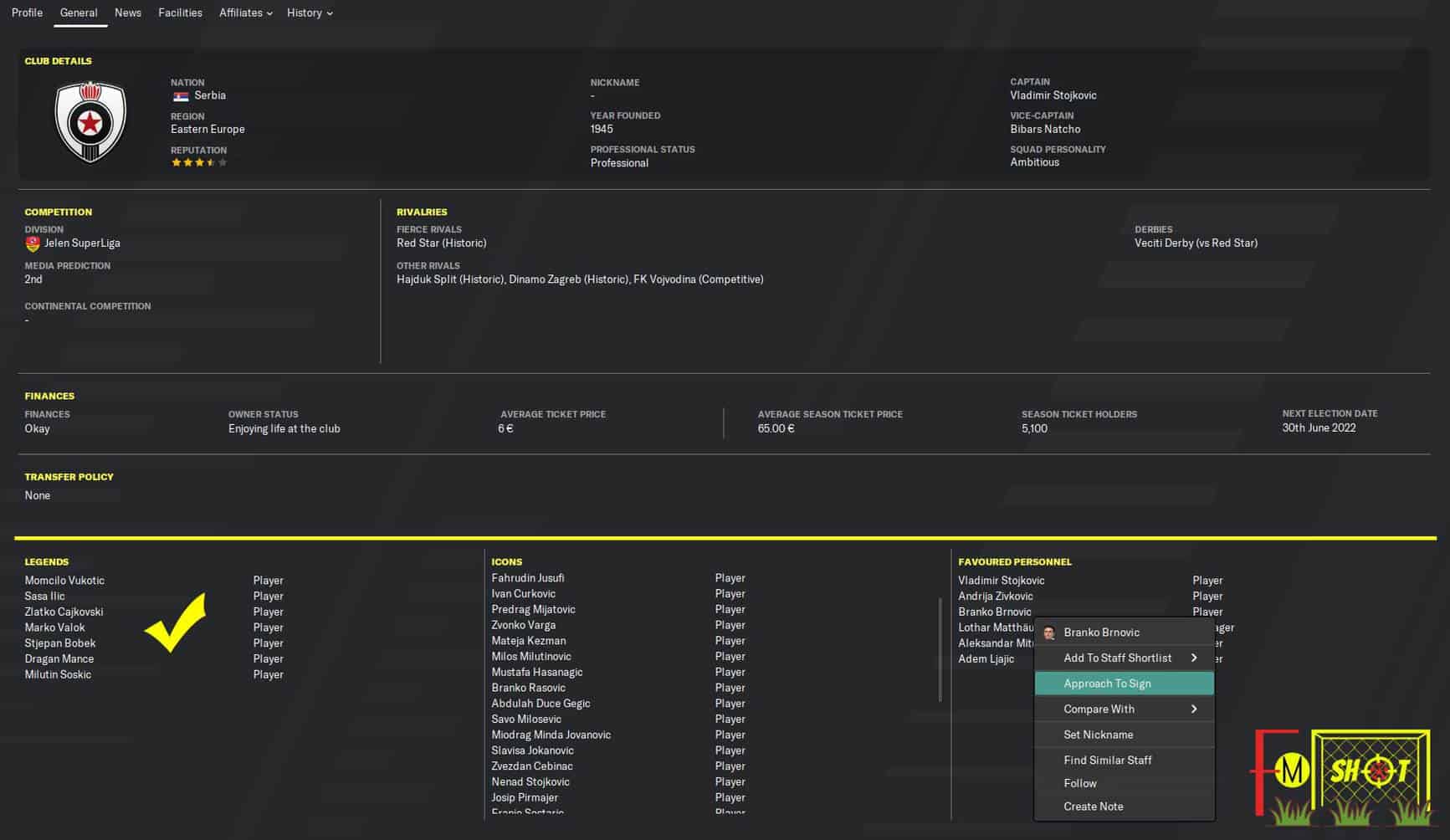 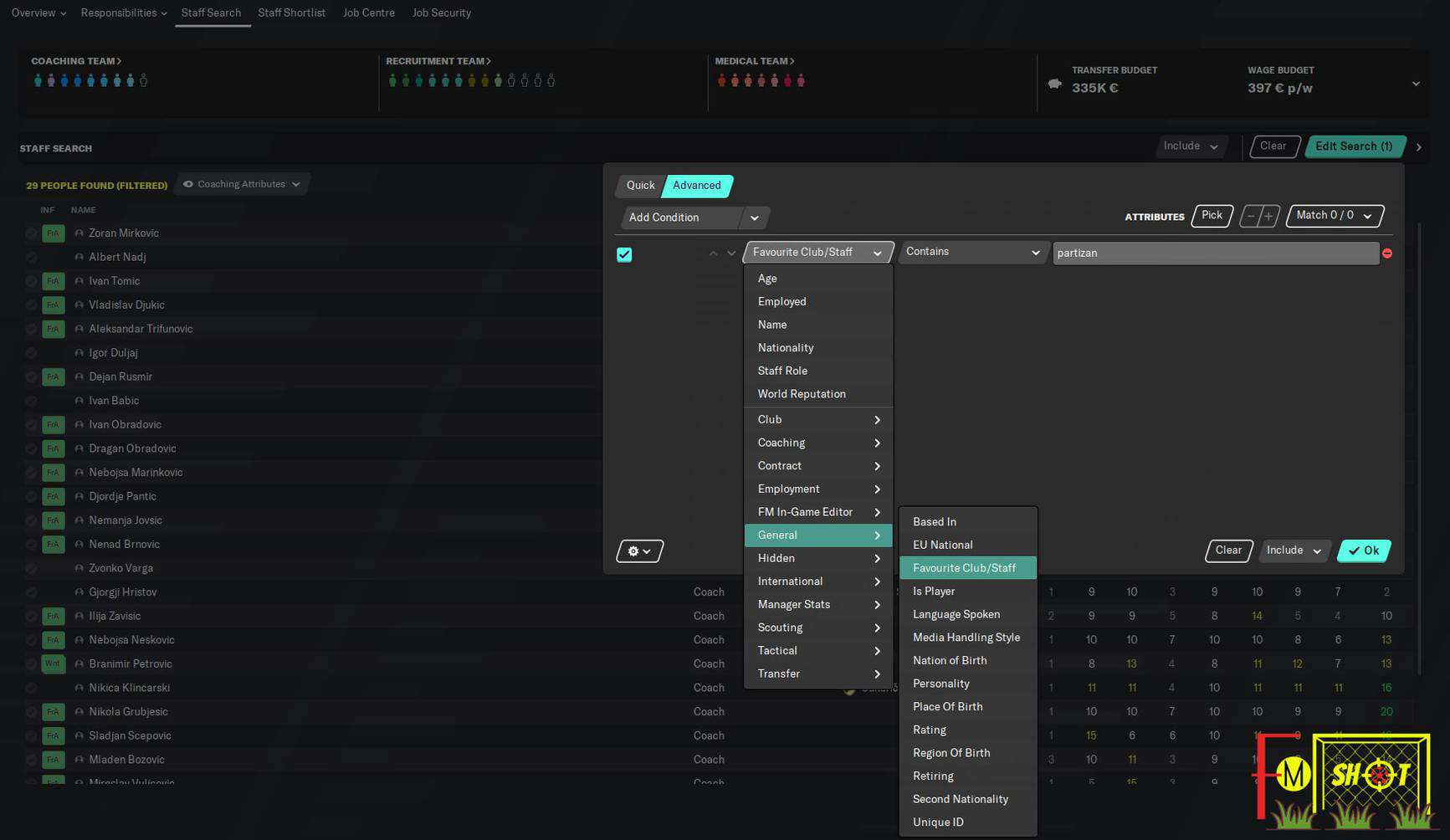 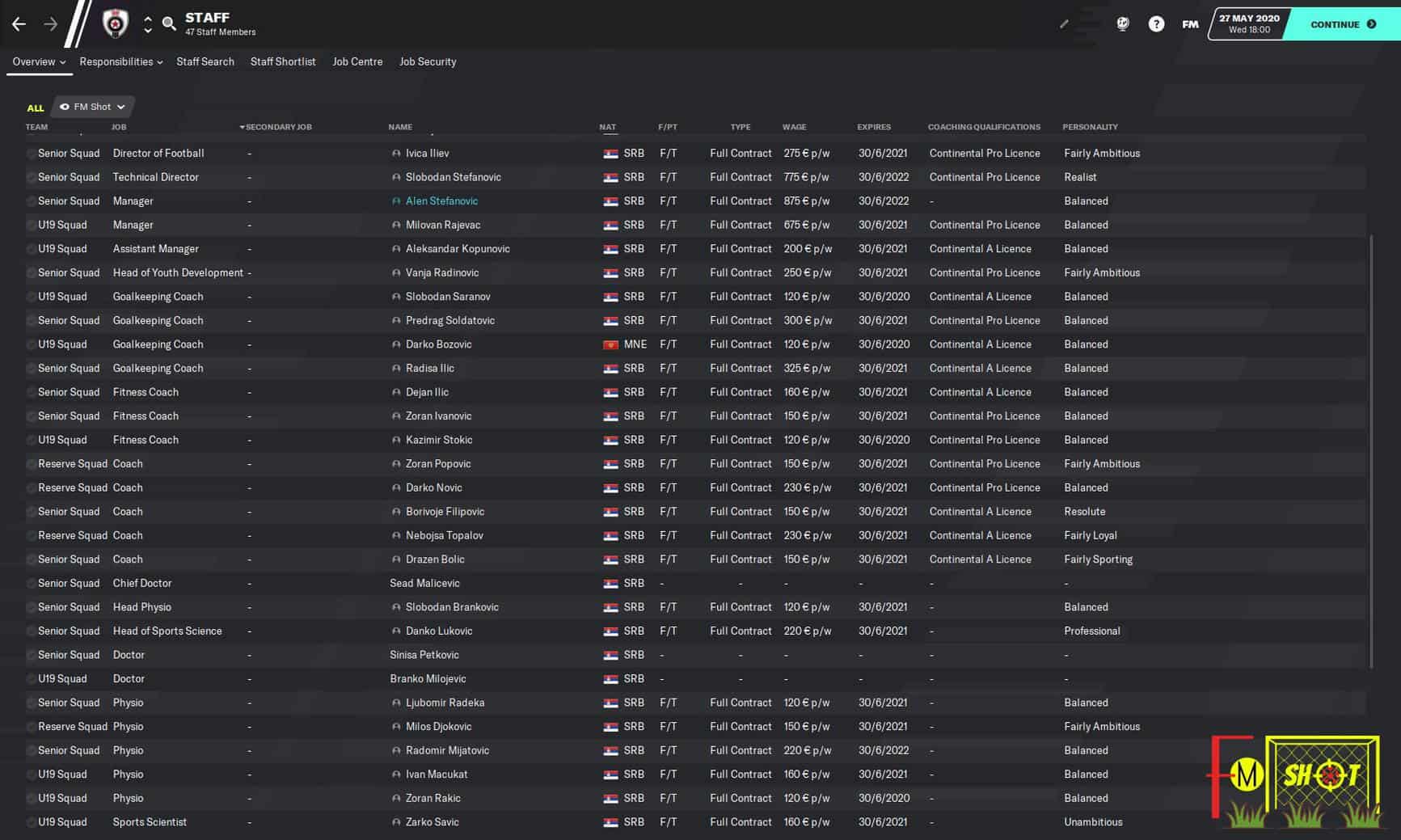 Stars on the Pitch

Right at the beginning, I will single out two names: Vladimir Stojkovic (GK) and  Bibras Natcho (MC).

They are a great support to young players and it is difficult to imagine a European match without them.

When we talk about speed, Lazar Markovic (AMR) and Takuma Assano (AML) are the best solutions at the moment.

Seydouba Soumah (AMC) is synonymous with creativity but Aleksandar Scekic and Sasa Zdjelar provide strength and security in the middle of the pitch.

Defensive reinforcements are needed in certain positions, but Nemanja Miletic (DC) has the main say.

I’m not happy with the number of strikers in the team, and Umar Sadiq (ST) doesn’t fit into my system. 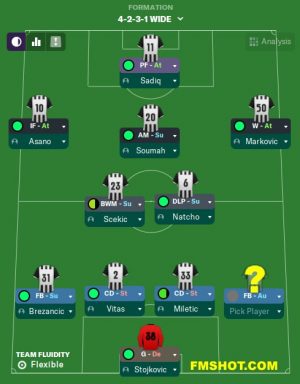 These are the key players when selecting the formation and tactics! I think 4-2-3-1 must be option number one, while 4-4-2 Diamond and 3-4-2-1 DM are backup options.

The most important thing is to achieve good results and create a system.

As you could see the problem is the DR position. Unfortunately, I don’t have the money to make one transfer, but I brought a great player on loan.

His name is Lorenzo Venuti – Fiorentina.

The preparation period went great (no injuries), and we played 7 friendly matches. I saw more positive than negative things on the pitch.

It was easy to select the first eleven as well as the players who are part of the rotation system (B team).

Stjarnan was the first opponent on the way to the group stage of the Europa League.

I believed in a convincing victory because the quality was on our side (6-2).

After that, we flew to Scotland to visit Pittodrie Stadium. I immediately saw that Aberdeen will be a tough opponent and a serious test (experienced players 30+).

However, I made one amateur mistake! I sent scouts late to gather the necessary information about “The Dons”. We lost 2-1 (A) …

Seven days later we played a rematch and I expected uncertainty until the very end.

We managed to win 3-2 (H) but it was not enough to continue the competition. Honestly, I was happy in a way because time works for us.

There was great dissatisfaction in the locker room, and most of the players were difficult to motivate in the next matches.

Proof that Football Manager is a sports simulation No.1… 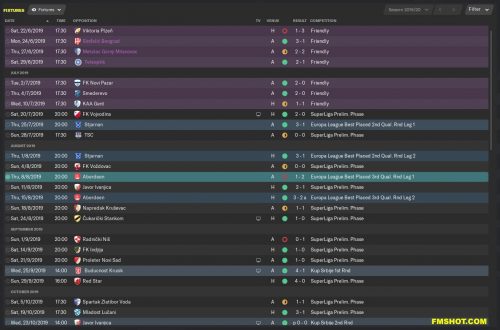 Match of the season

When you beat Red Star (4-3) in the national cup final, you have saved your job next season.

You can be 2nd or 3rd in the SuperLiga and you will get a chance for a make-up exam.

However a far more important moment is the friendly match against Porto where we lost 1-0 (A). It’s the match of the season for me!

If we want to be part of the elite (Champions League) we have to play against the best.

Unfortunately, the SuperLiga is very weak, and a strong domestic championship is the main precondition for making a fantastic result in Europe.

That is why it is necessary to test yourself against a stronger opponent and learn a lesson after defeat. 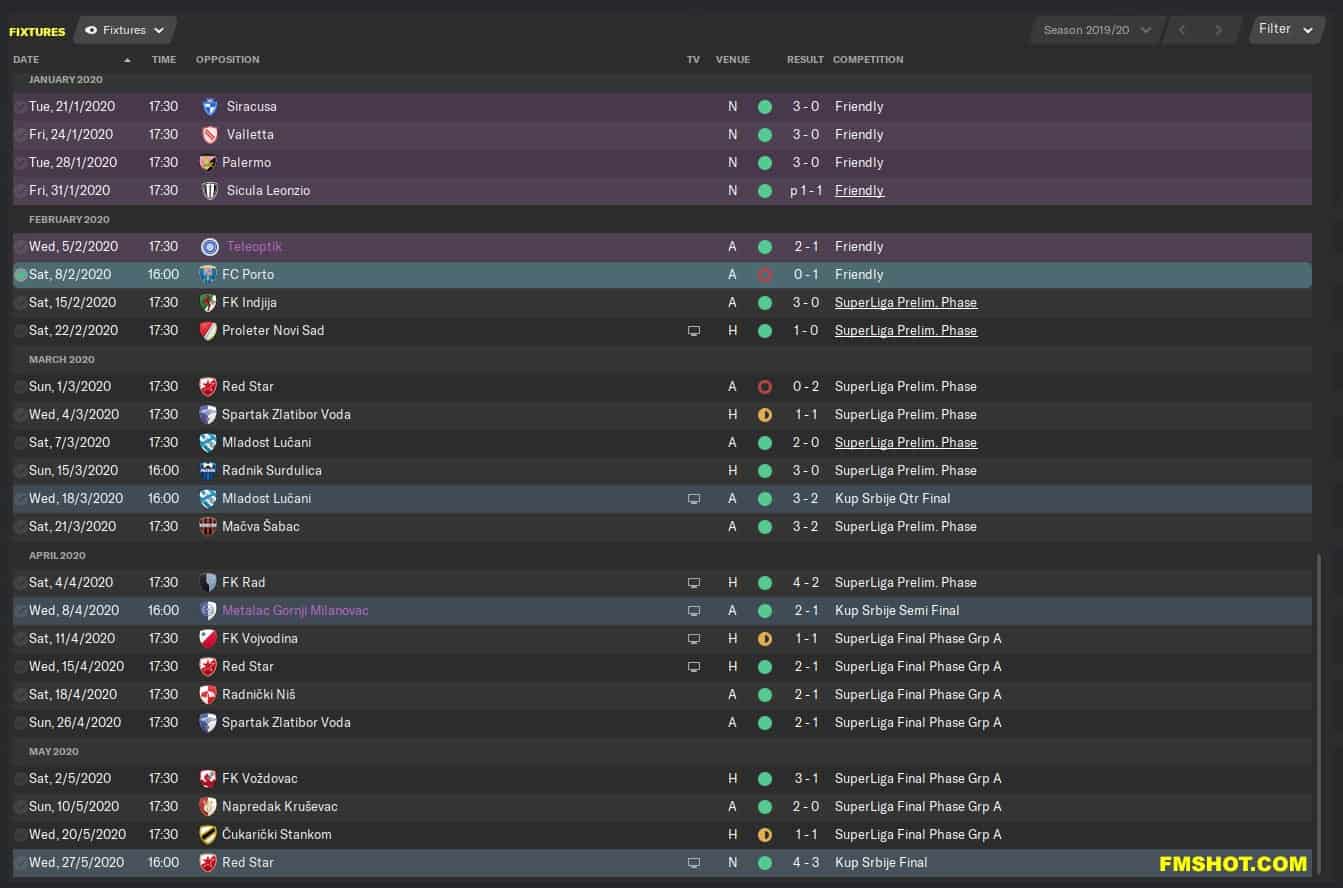 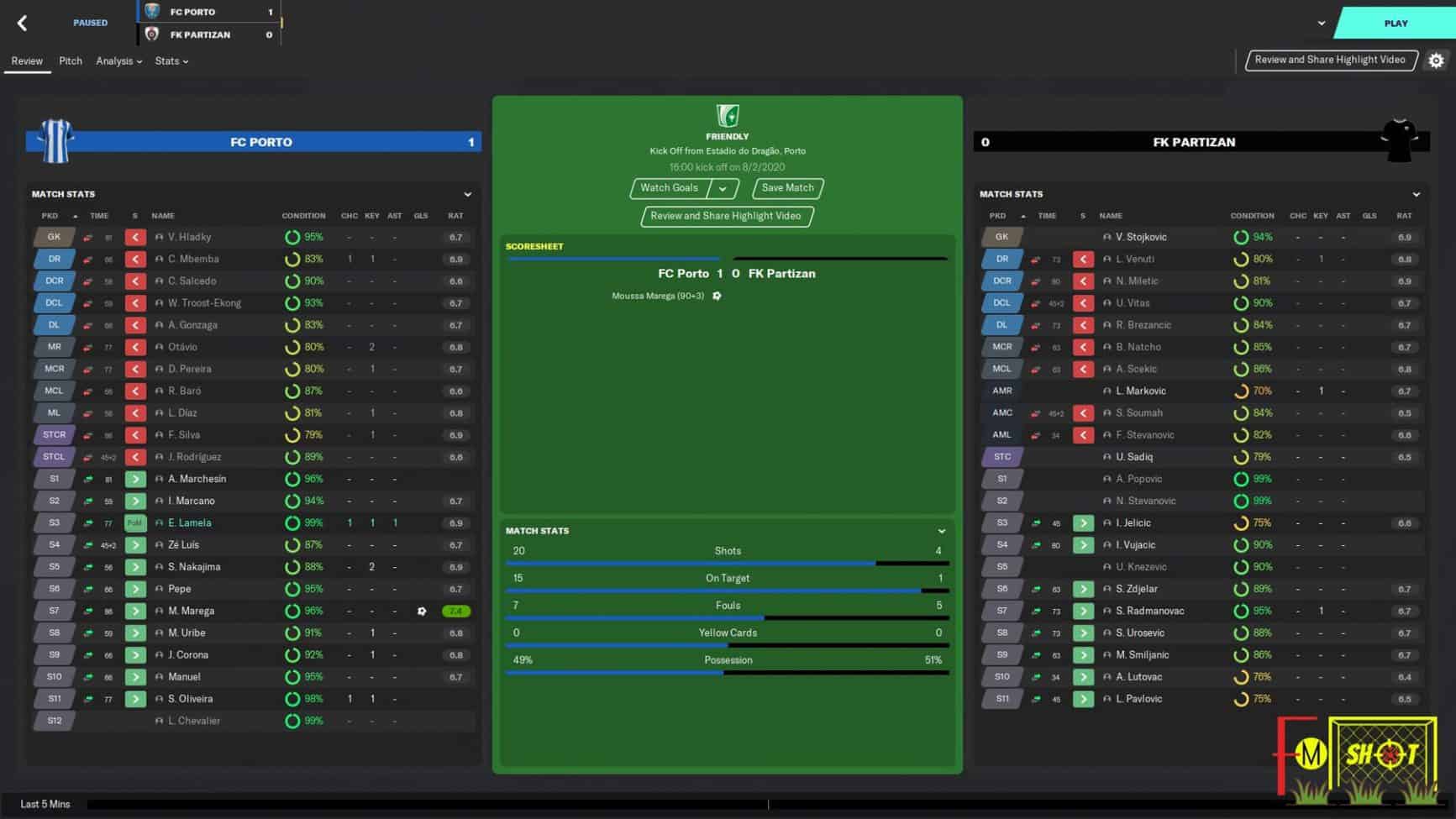 The Red Star reached the Europa League 2nd Knockout and was defeated by WfL Wolfsburg (3-0).

I must say that it is a great success for Serbian football because we will have more representatives during the qualifications for the European competitions next season.

On the other hand, Partizan had more free time, and I used it in the best possible way. 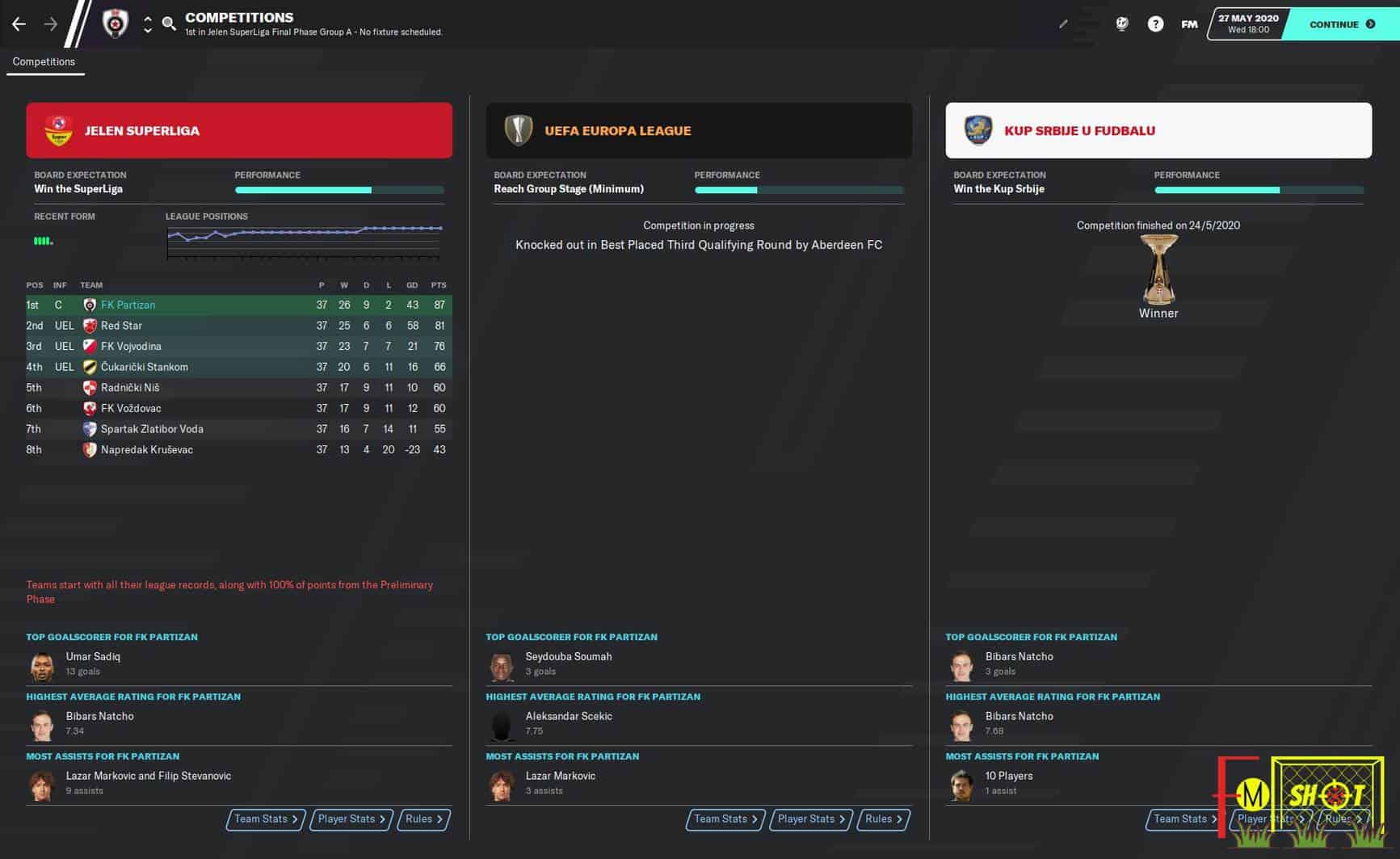 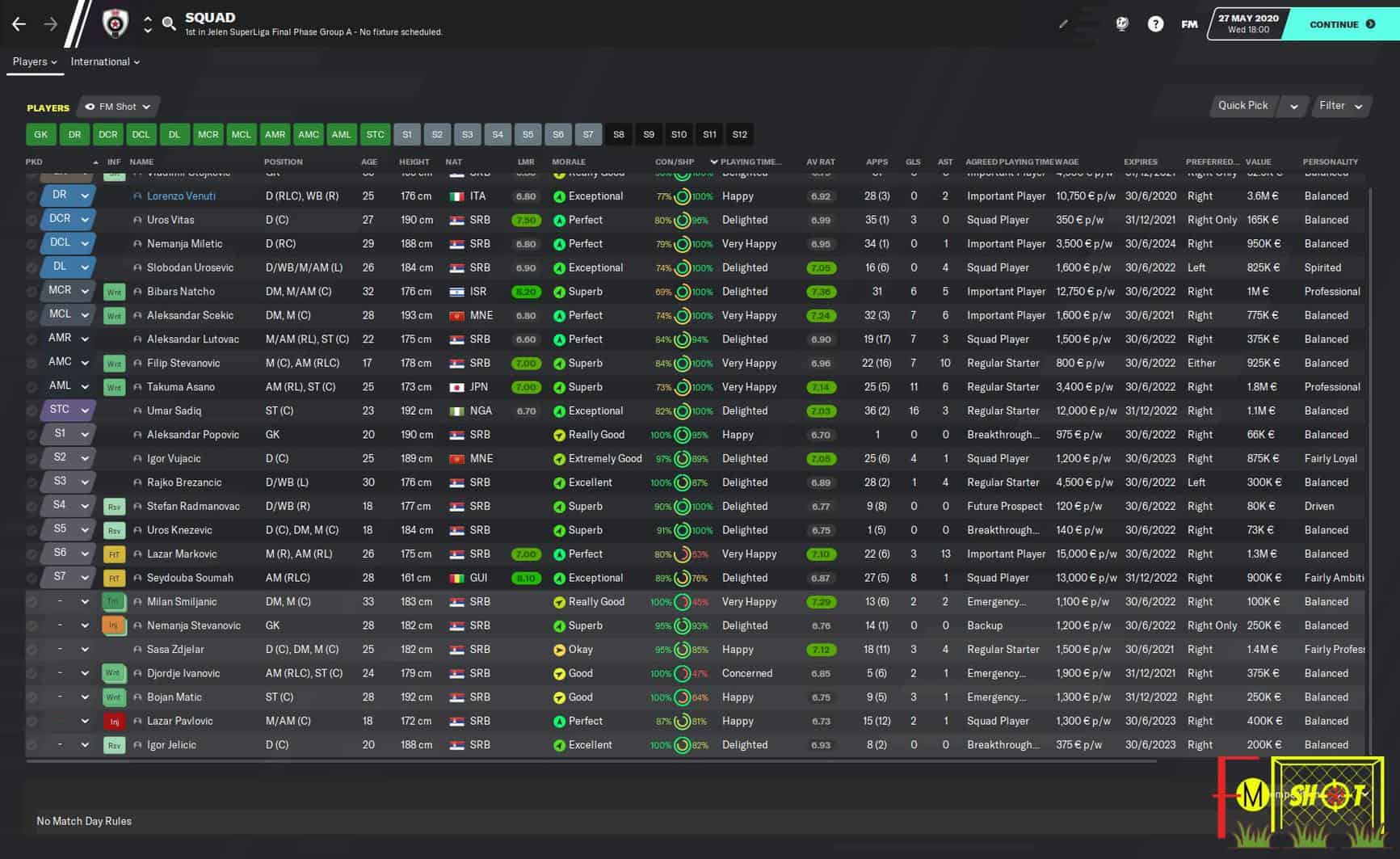 I made a system and analyzed the situation in the club in detail.

I followed the development of young talented players and some of them got a chance in the first team. The party starts soon.

Thank you for your attention and your time.