I Am Looking For New Staff Members With A Good Reputation

After playing Football Manager for many years I realized that more than 50% of staff members deserve “mutual termination” during our first meeting in the new club.

Perhaps my criteria are too strict, but not everyone can be part of a winning team.

In this article I will show you a simple system of selecting new experts in Brescia (step by step).

The whole process would be called “before and after”, but considering that I will be using a lot of pictures this could be a good FM Staff Guide. 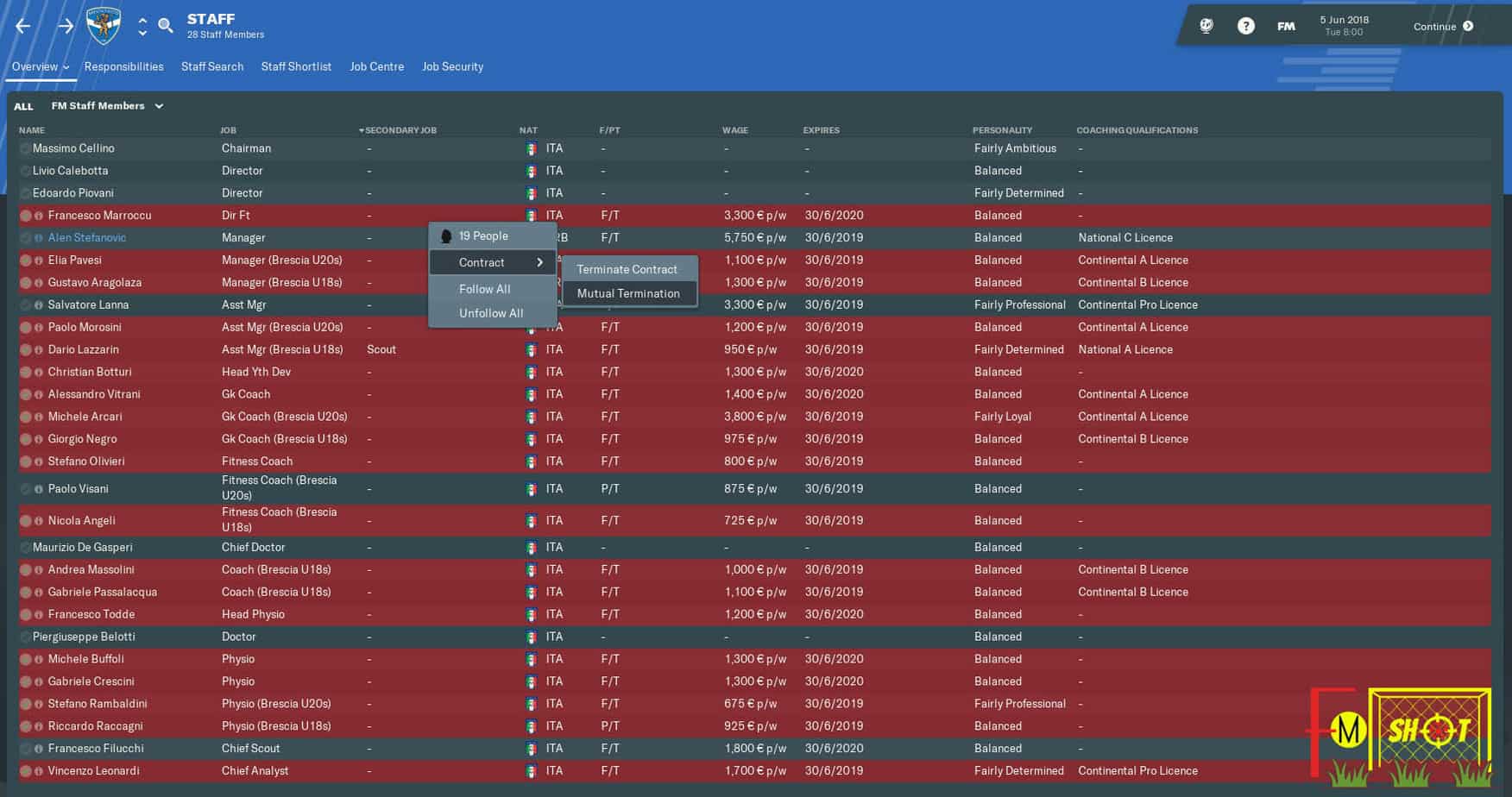 As you can see, I fired 19 people and some I have provided a chance for a new beginning.

Now it is important to prepare the ground for new faces to come to the club.

The plan is as follows: Italian experts, aged 25-40 years, and international experience for certain positions. Strategy – save as much money in the budget.

A position that carries great responsibility, but I expect the Director of Football has the following tasks:

Rino Foschi (71) was the first option, but an agreement was not reached due to financial disagreements (wage + € 4K).

In the end I decided on Ivica Iliev (38) who worked as Director of Football at Partizan. 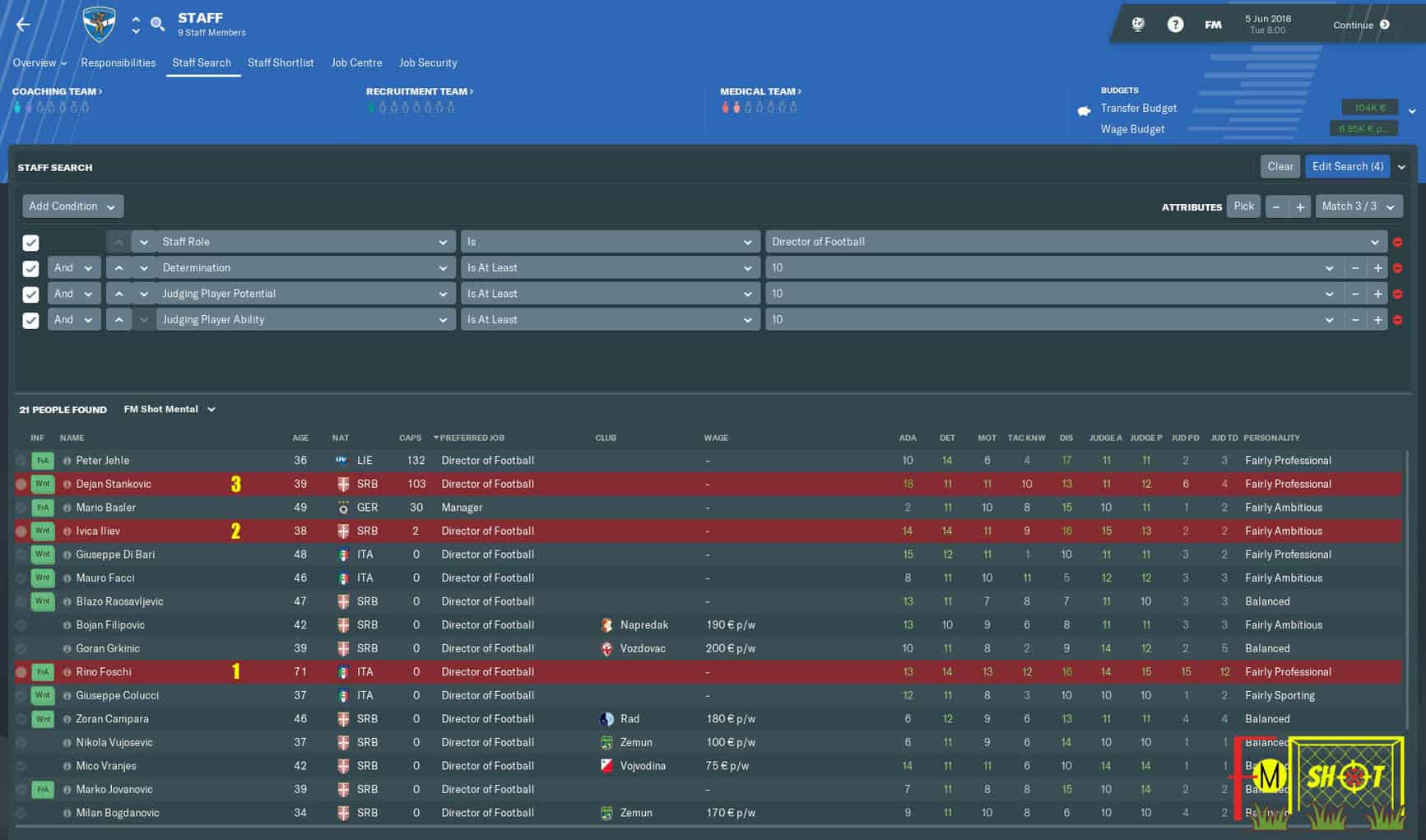 Brescia’s Under 18s have 34 players at the moment, and for the quality to “float to the surface” a good atmosphere is needed among members of the staff with the badge – Under18s.

Head of Youth Development is at the top of the pyramid as he is in charge of bringing youth players into the club!

In other words, he must recognize the talented player fairly quickly.

After a short selection, Gareth Prosser (40) was selected even though I thought it was Lucio Fasolato (66) a logical solution.

In the case of Brescia finds its way into Serie A, there will be a new expert on this position. 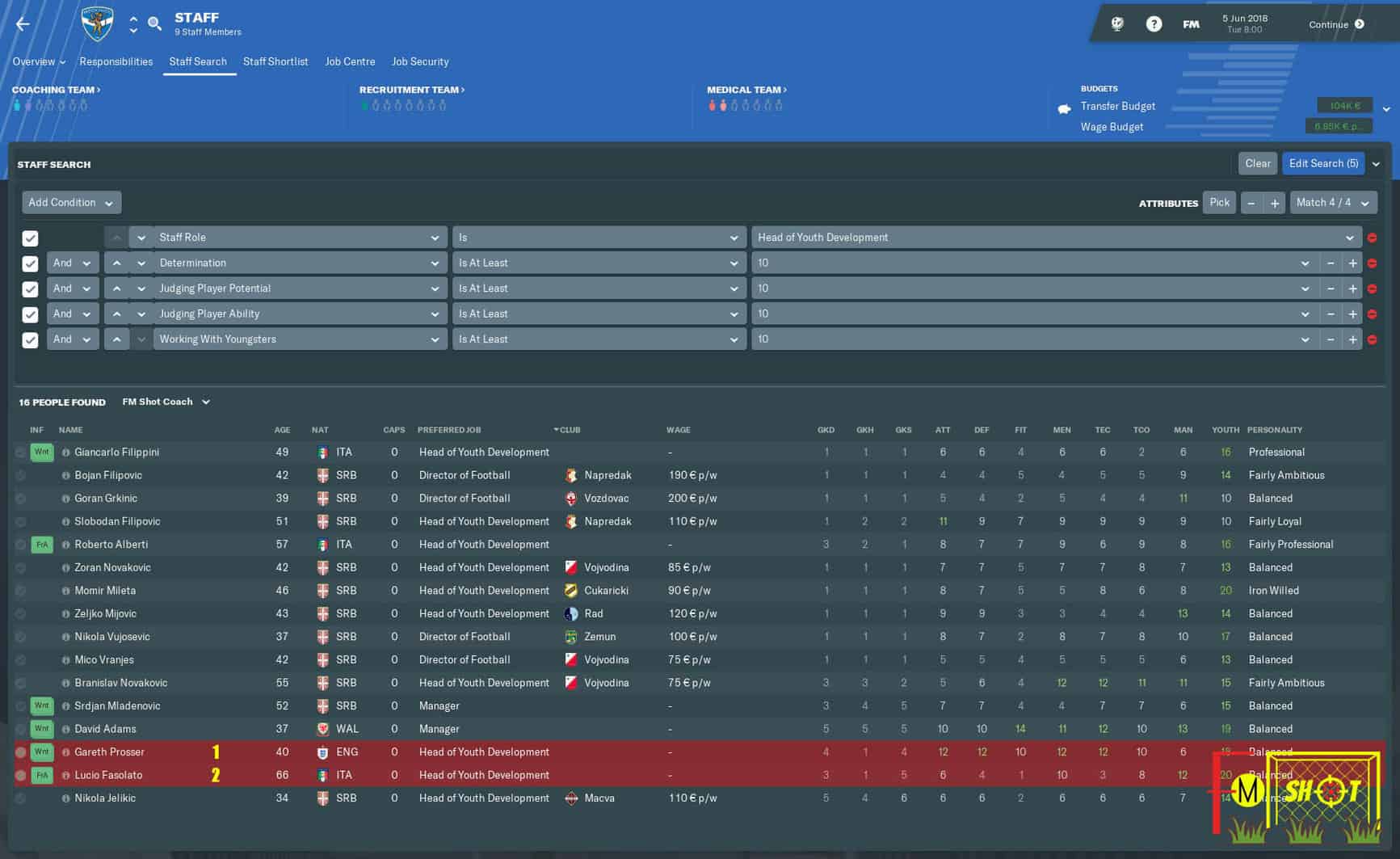 The fact is, Brescia has a modest budget so I am not able to spend a large sum of money on employee salaries.

The manager who will work with the Under 20s selection must be Italian and aged between 28-35 years.

When it comes to attributes, I will pay attention to the following: Man Management, Working With Youngsters and Judging Player Potential/Ability.

I was able to find only one candidate who meets the criteria, and it is called Antonino La Monica (29) – a former player for Juve Stabia and Poggibonsi.

He’s a good coach, but I see no reason why he would not be a manager?

There is a limit that must be respected so I must not have more than 4 coaches at the club.

I’m talking about the first team but with the help of the Under 20s selection we come to number 7.

The first task is to find a great fitness trainer as well as someone who will be taking care of goalkeepers’ training.

After that, I’ll find coaches for the remaining training categories (defending, possession and attacking), and their names can be found at the end of this article. 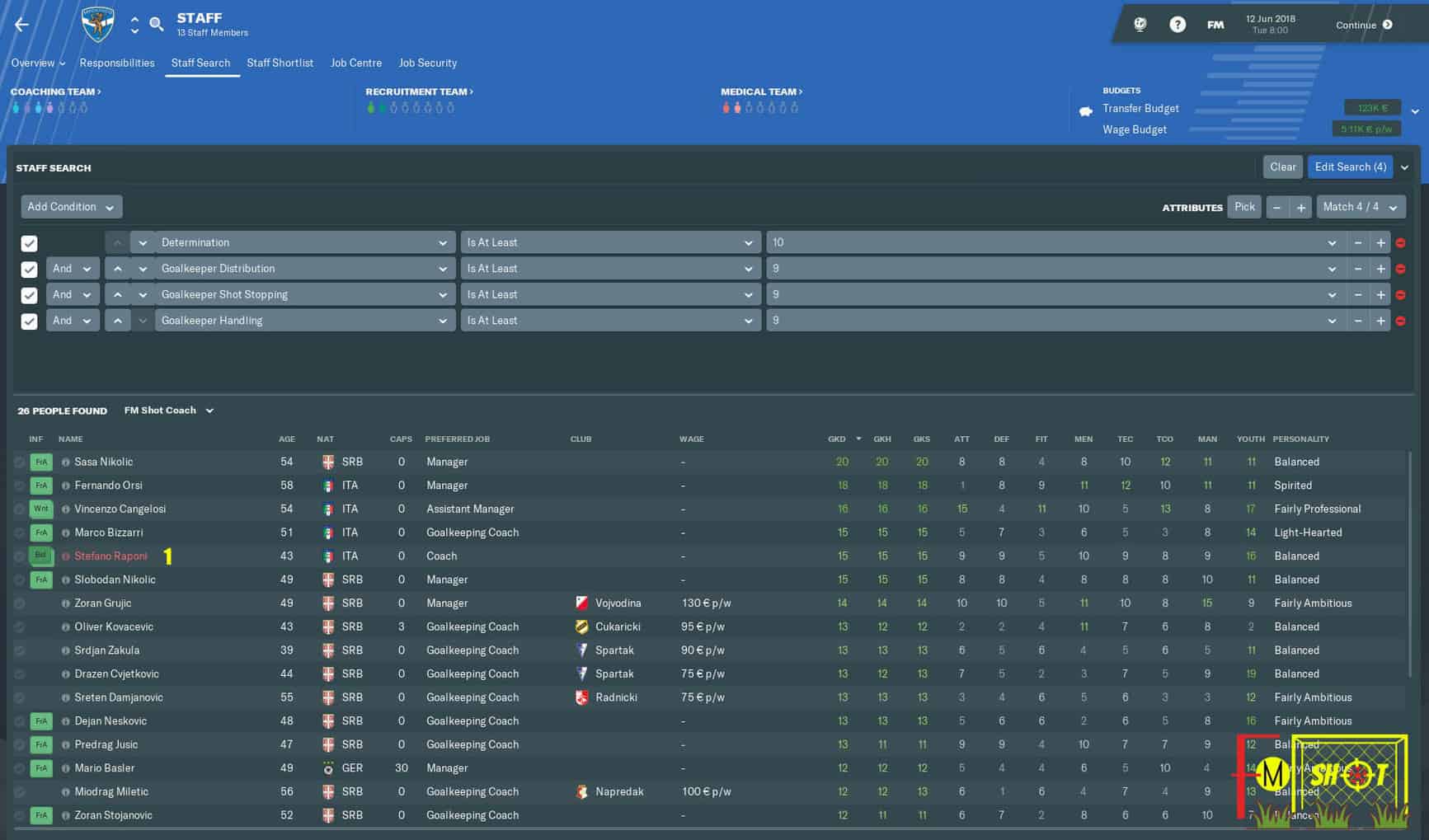 When choosing an assistant, I try to find a person who will have additional qualities in addition to scouting and keeping other staff members in check.

It means he’s a good coach or manager.

On the other hand, it is not easy to find such an expert especially when you are competing in a lower rank or have little money in the account.

I was able to find an assistant manager who is as good as a goalkeeping coach and as a scout.

His name is Vincenzo Cangelosi (54) and he is a great signing for the club at the moment.

I wish Man Management was a little better, but it matters less in the whole story. 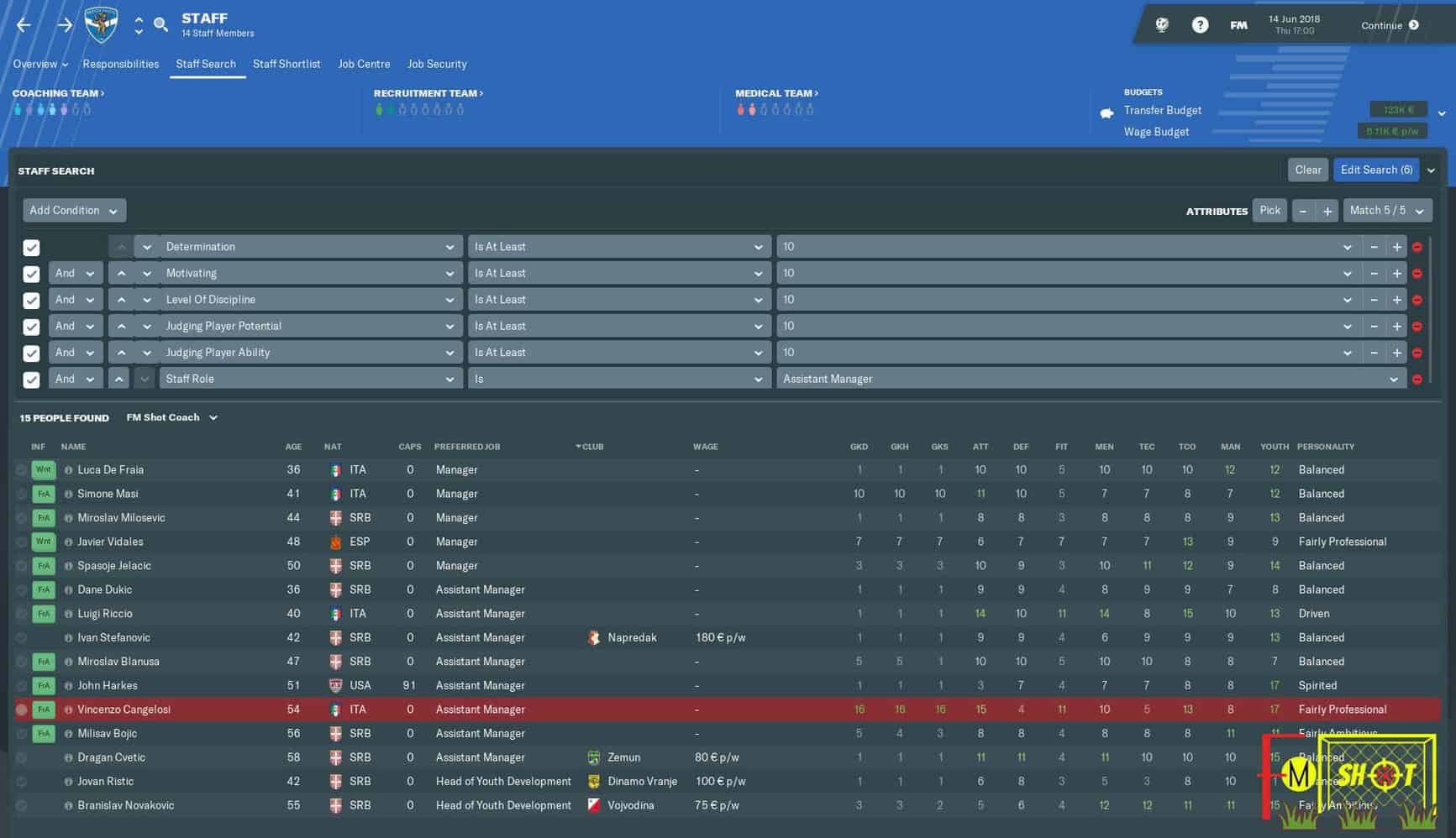 The medical team will not have many members at the beginning of my adventure in Brescia.

The problem is the inability to meet the criteria related to the following attributes: Determination (10), Physiotherapy (15) or Sports Science (15).

This is supported by the fact that there are only three names on my monitor screen (2 physios and 1 sports scientist)! 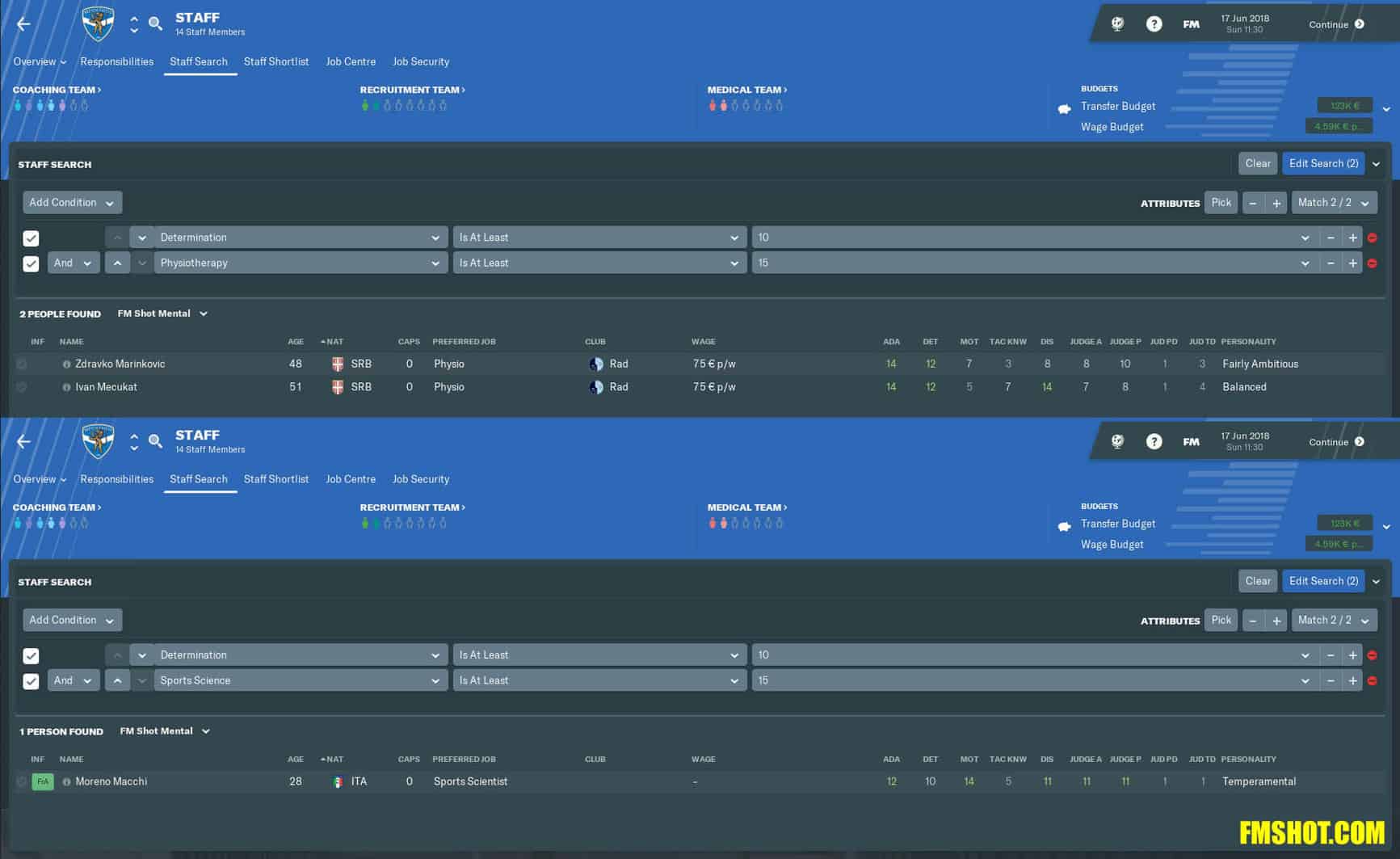 I used to look for a scout who has good attributes, and now Scouting Knowledge comes first. 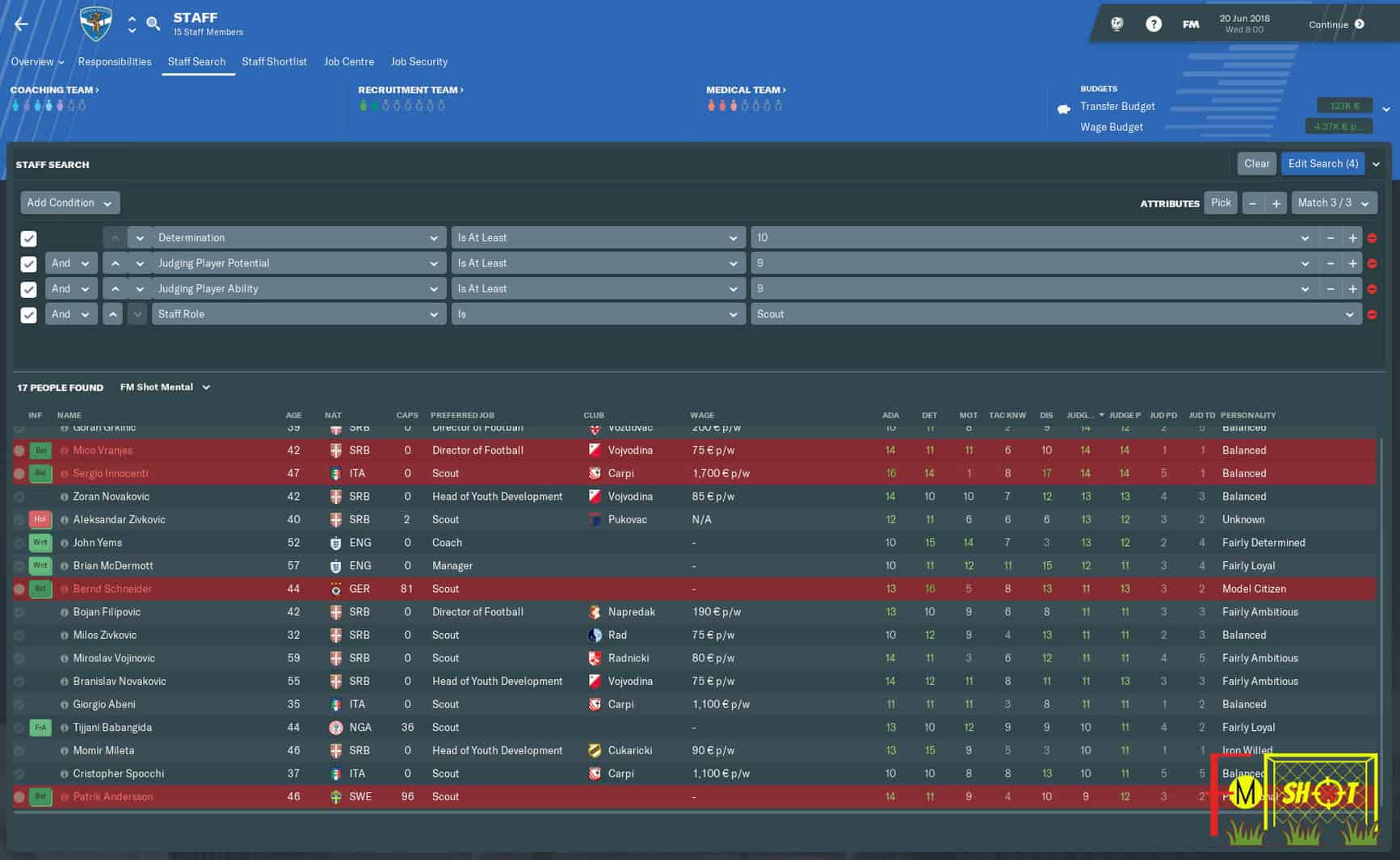 Data Analyst is a very important person in the scouting team because his reports facilitate the scouting process by revealing the virtues and disadvantages of the next opponent.

It’s easy to see who the key players are and who has the “unavailable” tag due to injury.

I would like to point out some more indicators: Post-Match Analysis, Squad Comparison, Manager & Tactics … 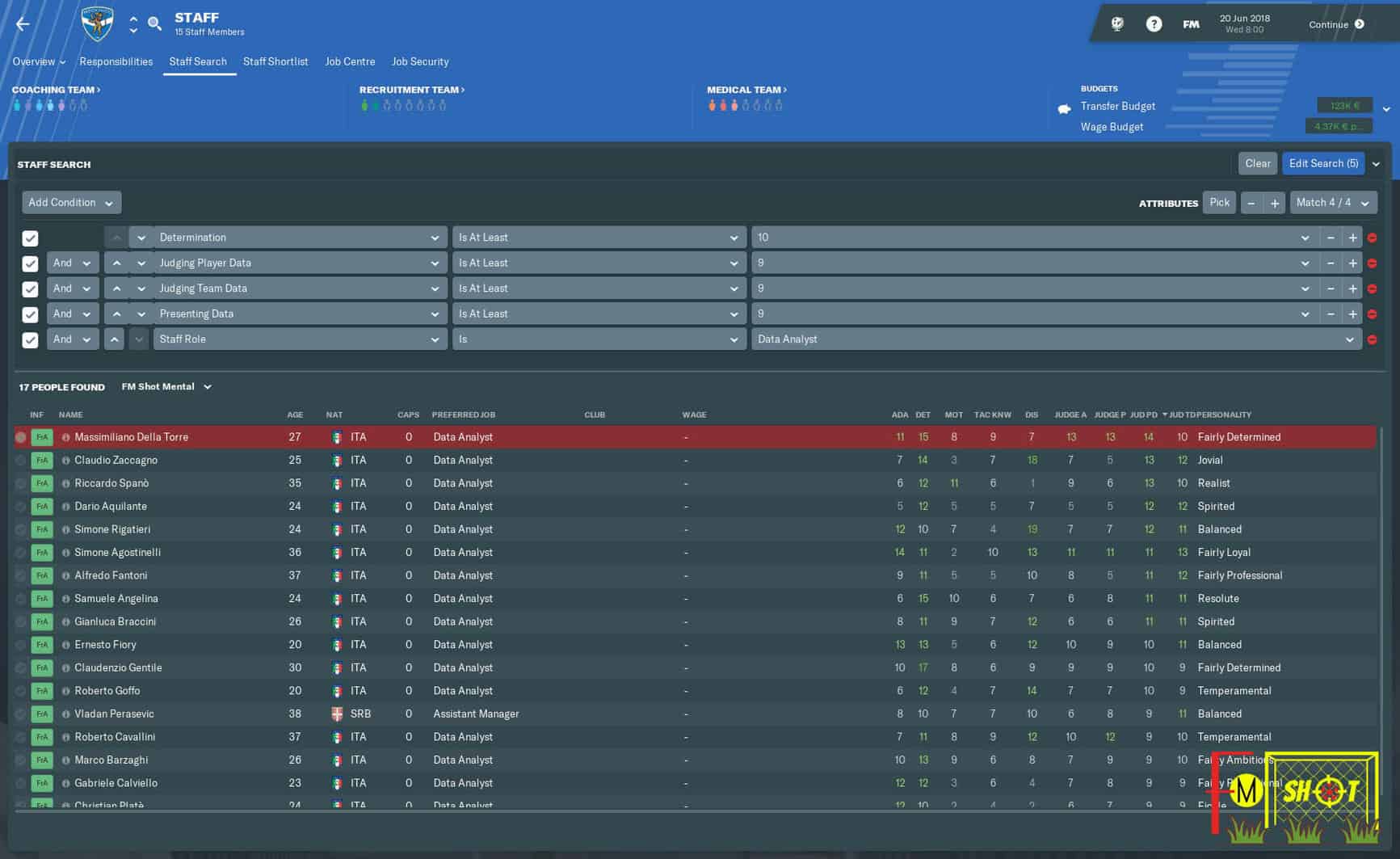 I’ll end the story by posting the names of the staff members I’m seriously counting on this season.

Some of them have a good reputation (⋆⋆⋆) and young professionals have been given the opportunity to work with Under 20s & 18s selections.

I expect new candidates for 6 months if Brescia is at the top of the table. 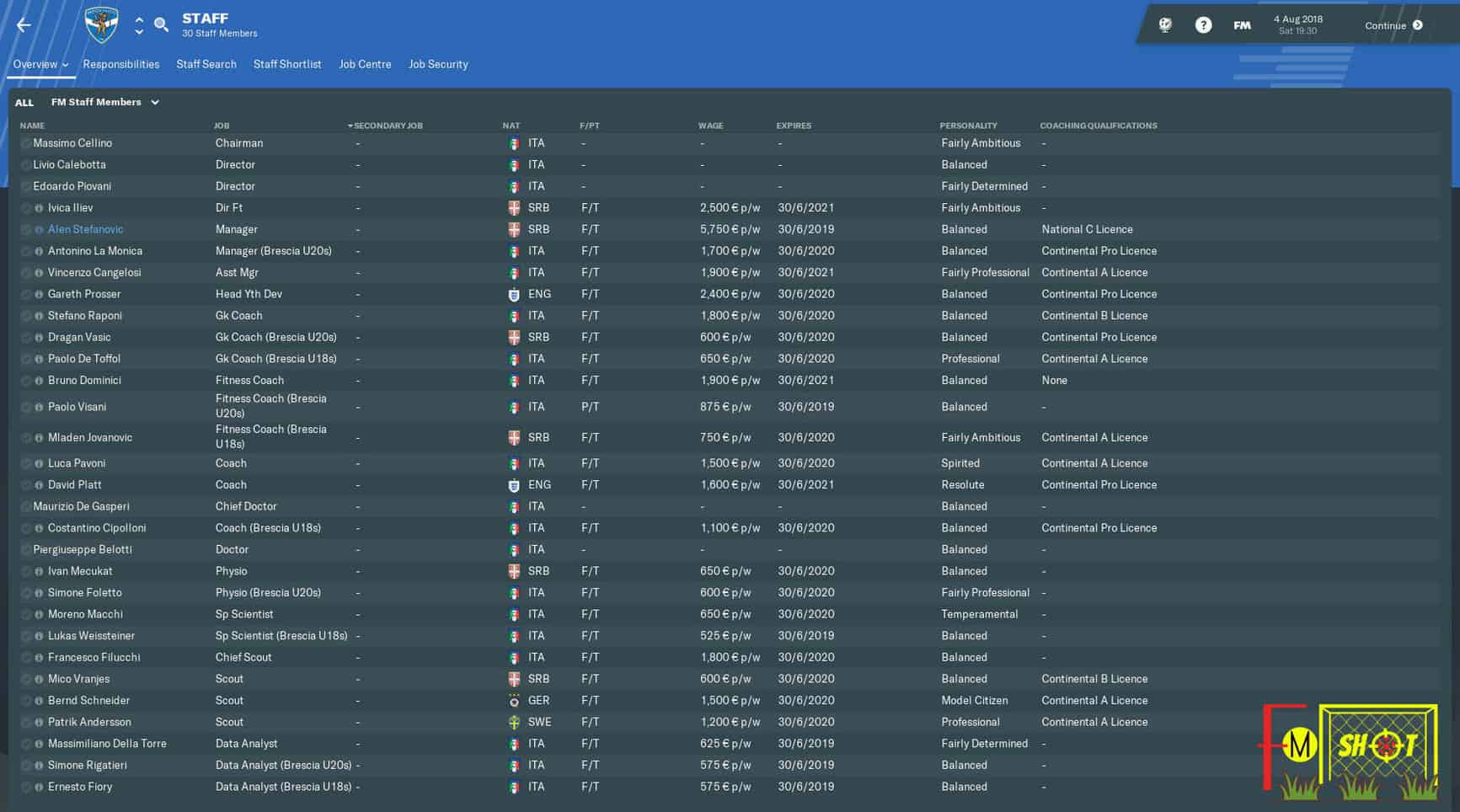 That’s it. I did not use the “Best Coaches, Assistant Manager… for 5-Star Training” lists but tried to find staff members for my club on my own.

You will notice that the main attribute is Determination regardless of workplace.

Is this the perfect system? – No! But it works great for me.