Why don’t I have a head of youth development at the club?

Playing Football Manager for many years, I realized that the most beautiful feeling is to give a small contribution to relation » player – legend of the club.

Anyway, if it is a little-known club which can make transformation under my conductor’s rod for 180 degrees, my heart is full of joy.

An undeniable fact is that talent (attributes) plays a role in the whole story, but more factors are in the game.

First of all, I mean the staff, the team spirit and the fans who give the final court.

If I had to look for an example of a legend in the real world, it would be Francesco Totti. But the epithet “one man club” in FM is a little harder to achieve.

First, it is necessary to make you a good base in the Under 19s selection.

Determine the specific task based on attributes and position of a player, forming a player’s personality, mentoring, loans, and the like, these are just some of the challenges.

Based on my personal experience, I can say that the maximum can’t be achieved if there is no head of youth development and status of youth facilities – excellent among the staff of the club.

With the previous sentence I don’t want to reduce the influence of other experts in the staff members option.

When you have good HoYD, the attributes of kids go faster to two-digit numbers. How and in which way I will explain …

Where is my head of youth development?

When you play a football manager you can expect the unexpected. I hope so that you won’t find yourself in a similar situation.

Soon after my arrival at the club the position remained vacant. There were enough 4 clicks on the “continue“ option that be followed by a shock.

An “attractive offer” of a club from the higher ranking of the competition decided that HoYD went one step more.

I tried a few cheap tricks in the sense of a new contract and a private chat but I didn’t succeed in doing so.

Maybe somebody will think that this is nothing terrible because there are X others. It’s true!

But not this caliber for a club that has financial problems and only 9% world (scouting) knowledge. 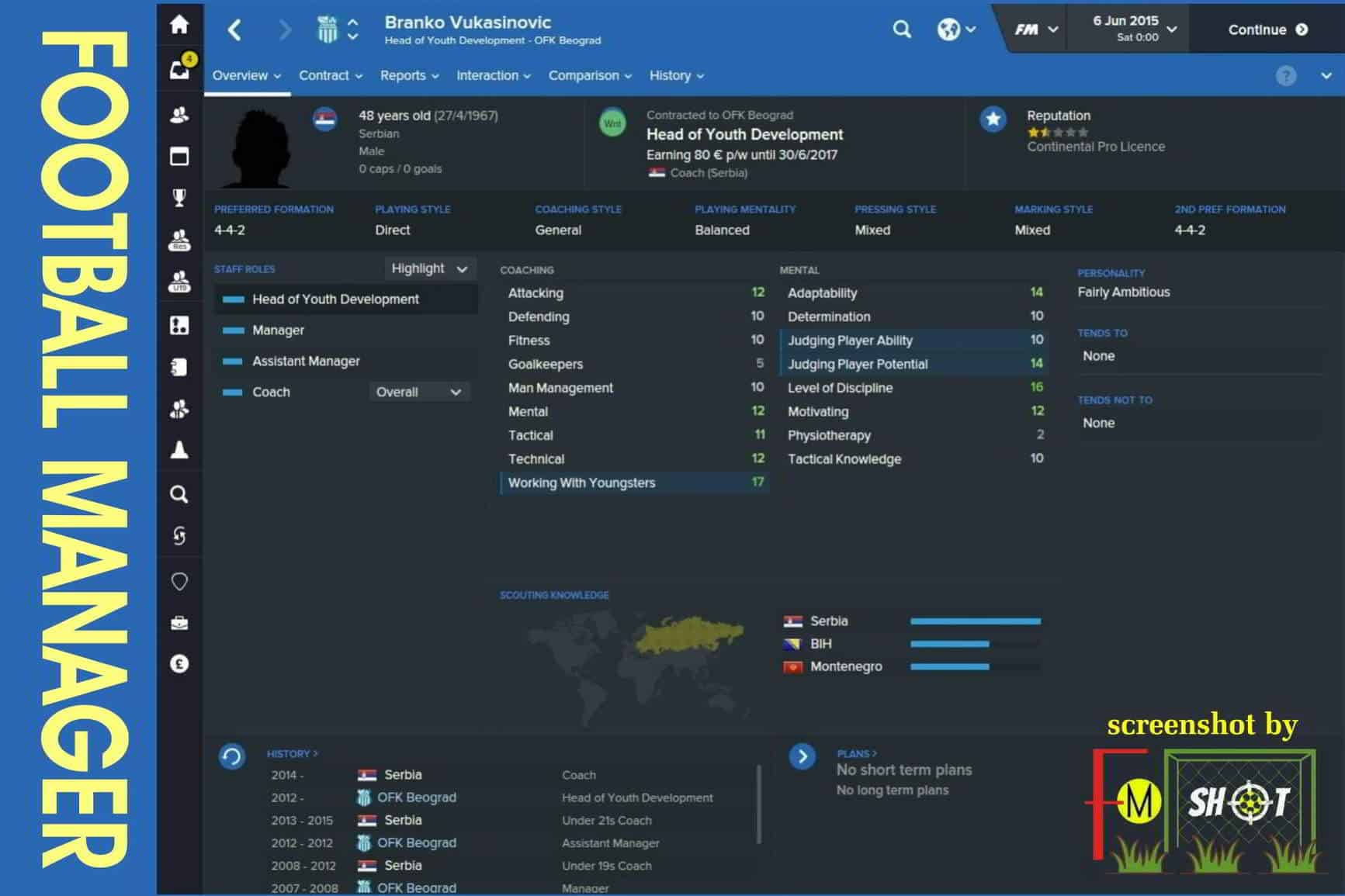 As you can see, it’s about a quality expert. I forgot to say that he has an extra function in the national team.

I’m currently looking for a replacement but the choice is bad. I have very high criteria when it comes to this position!

I don’t want to put someone just to fill the void and was a member more of the backroom team.

How to recognize a quality HoYD?

When I am looking for a new member of the club staff I pay attention to the following words: head, chief, director, assistant and manager. Why?

Because I know that an attribute is needed – man management.

If the position is related to the selection Under 19s, the first association must be working with youngsters.

I will stop for a moment the game with words.

Head of youth development can have a wide range of responsibilities and duties (with your permission).

Unlike the director of football who is mainly engaged in administrative works and scouting, HoYD has the opportunity to test himself as a coach of younger selections. 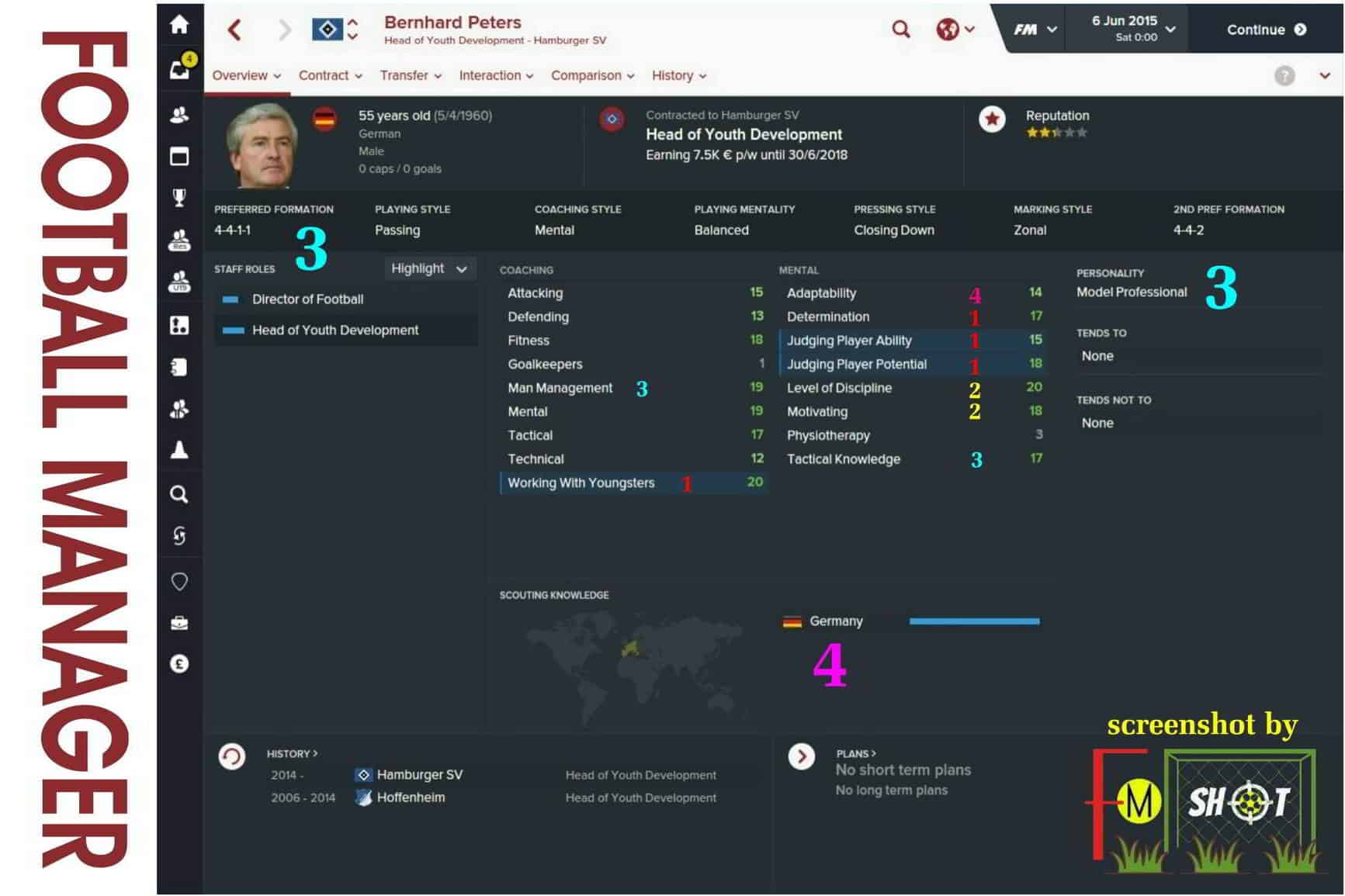 In order to successfully manage a specific training category (more stars), the preconditions are high grades of the following attributes: determination, level of dicipline and motivating.

In this way, he sees a wider picture of the activities and not rely only on the information given by coach of a particular selection, because he is already on the pitch.

However, if we talk about other permissions (individual tasks of players, hiring and finding the new regens), then we need to pay attention to some small things.

Personality. As much as HoYD was a good expert, if he is a scandal maker and problematic too, he is on my blacklist.

As an example to young players, I try to choose the following: (model) professional and (fairly) determined.

This could be a special topic in one of the following articles.

Judging player potential (JPP) and ability (JPA). How to assign a task to a player if you don’t know how to perceive the advantages and disadvantages?

For example, the “lob the keeper” task for the CD position is a clear miss.

Maybe somebody thinks differently but mistakes are expensive in FM.

These attributes are important for finding new young players around the world, signing contracts and transfers.

Preferred formation and tactical knowledge. This means that you as a club manager and head of youth development have a similar view of the world of football.

If all goes according to plan then the Regens arrive at the club – they are those who suit your game style and your tactics.

Why would HoYD choosen few players who play wing back (youth intake) when the first team forces the tactics 3-4-3?

The lack of a selection manager Under 19s or Reserves opens the door to the other staff members if they have good tactical knowledge.

Adaptibility. At the end, the attribute applying for foreign experts don’t relate only to this position but to the others.

A higher grade gets especially to the expression at scouting. It means easier getting to know the country and the club.

You can entrust a lot to the staff of the club, but the question rises – how smart is that?

Imagine that in the option staff – responsibilities, you entrust 60% of jobs to the loyal members of backrooom team. You become a “manager of mock-up“.

On the other side, you can’t do everything yourself. The solution is a balance of 70% – 30% in your favor!

If you know how to evaluate HoYD on the basis of previous indicators then it is unlikely that you will have problems with the delegating certain duties and tasks.

You know exactly whether he is a good coach, scout or manager of the selection Under 19s and B team. The Mini Gallery follows bellow … 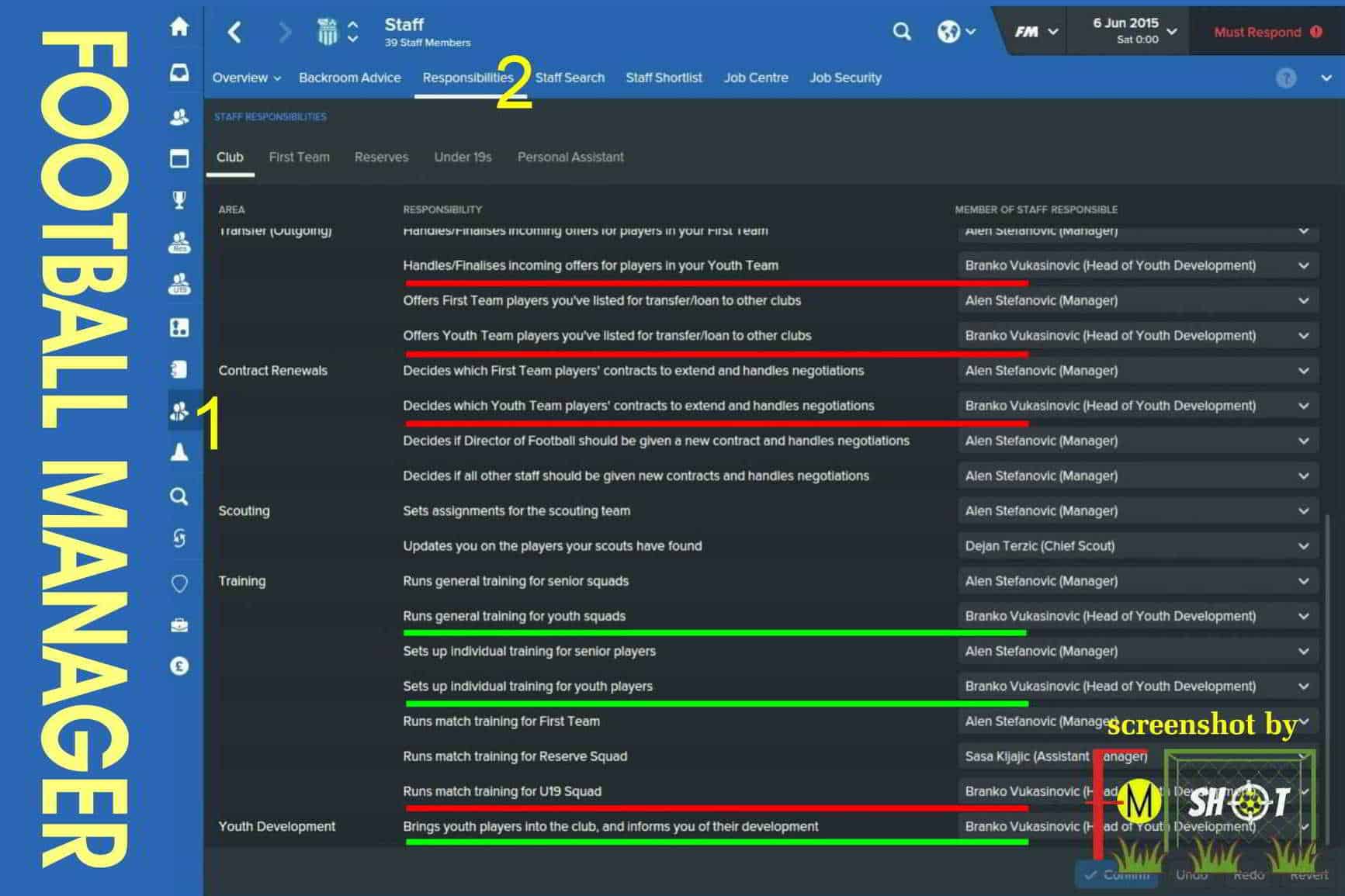 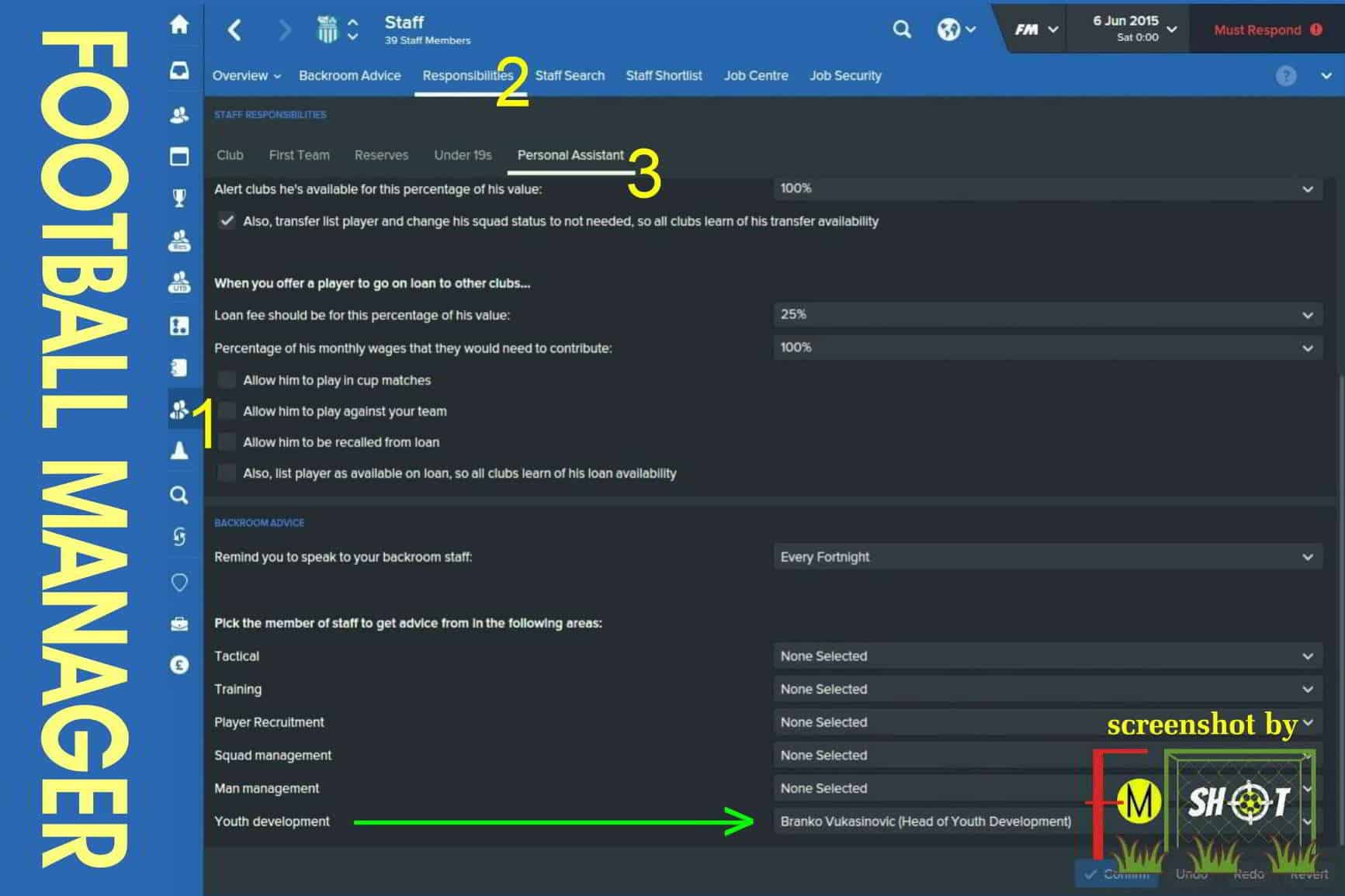 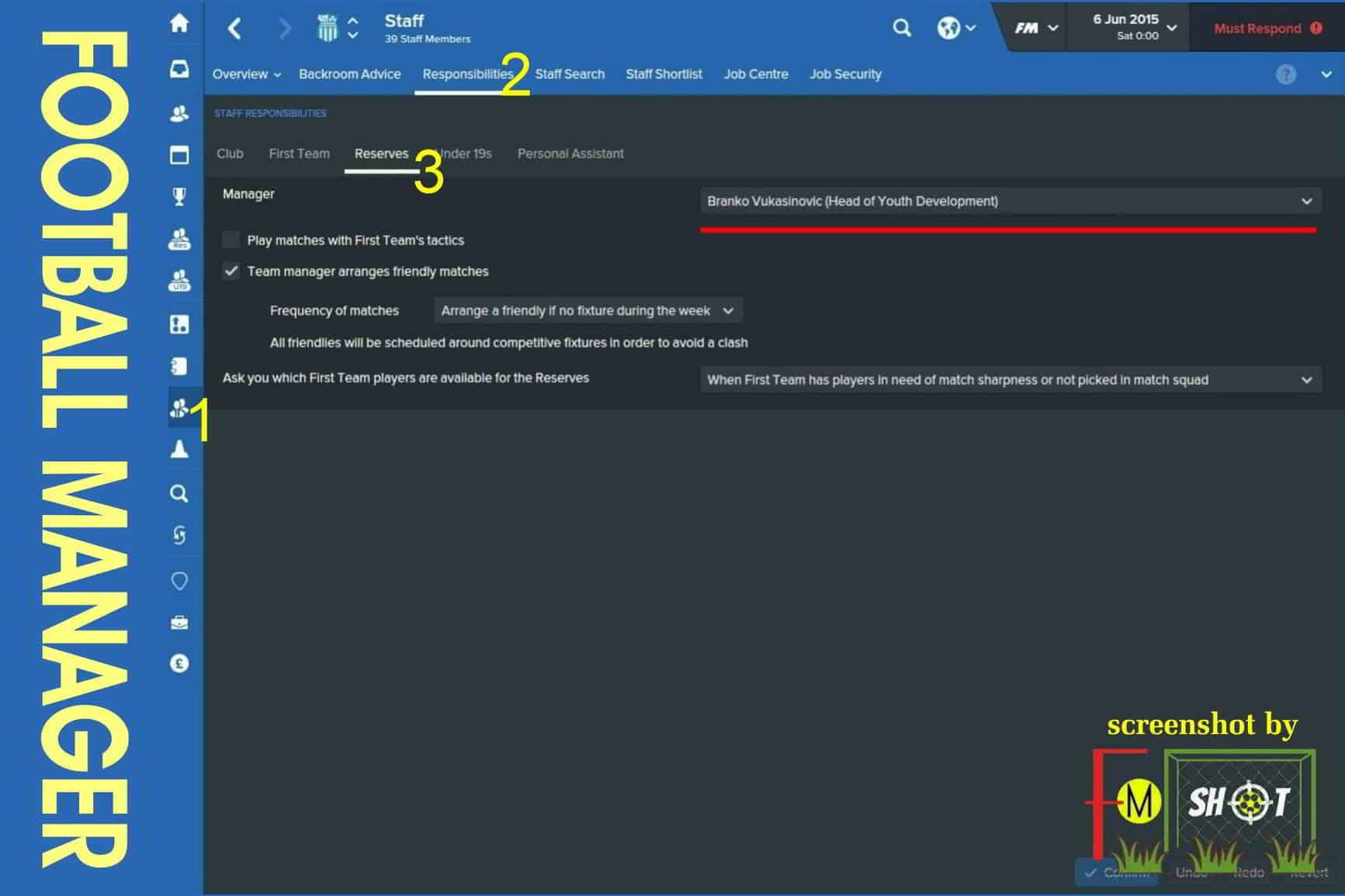 As can be concluded from enclosed, the permissions are similar to those that the assistant manager, director of football and the first coach of younger categories have.

The green lines on the pictures represent my options!

At the same time, I consider that shouldn’t be touched anything from the staff – responsibilities – first team.

But if think that I am wrong, you can feel free to experiment until you create your system.

How is the head of youth development scouting the players?

Do not think that this means a classic scouting. You can send him to some country for a month or two, and he makes a report to you about (makes you a report to) talented kids. Not!

His contribution is reflected in the ability to give an expert opinion about the potential of a player inside/outside the club, at your request.

Simply select “coach report” and get the pros and cons of a particular player. 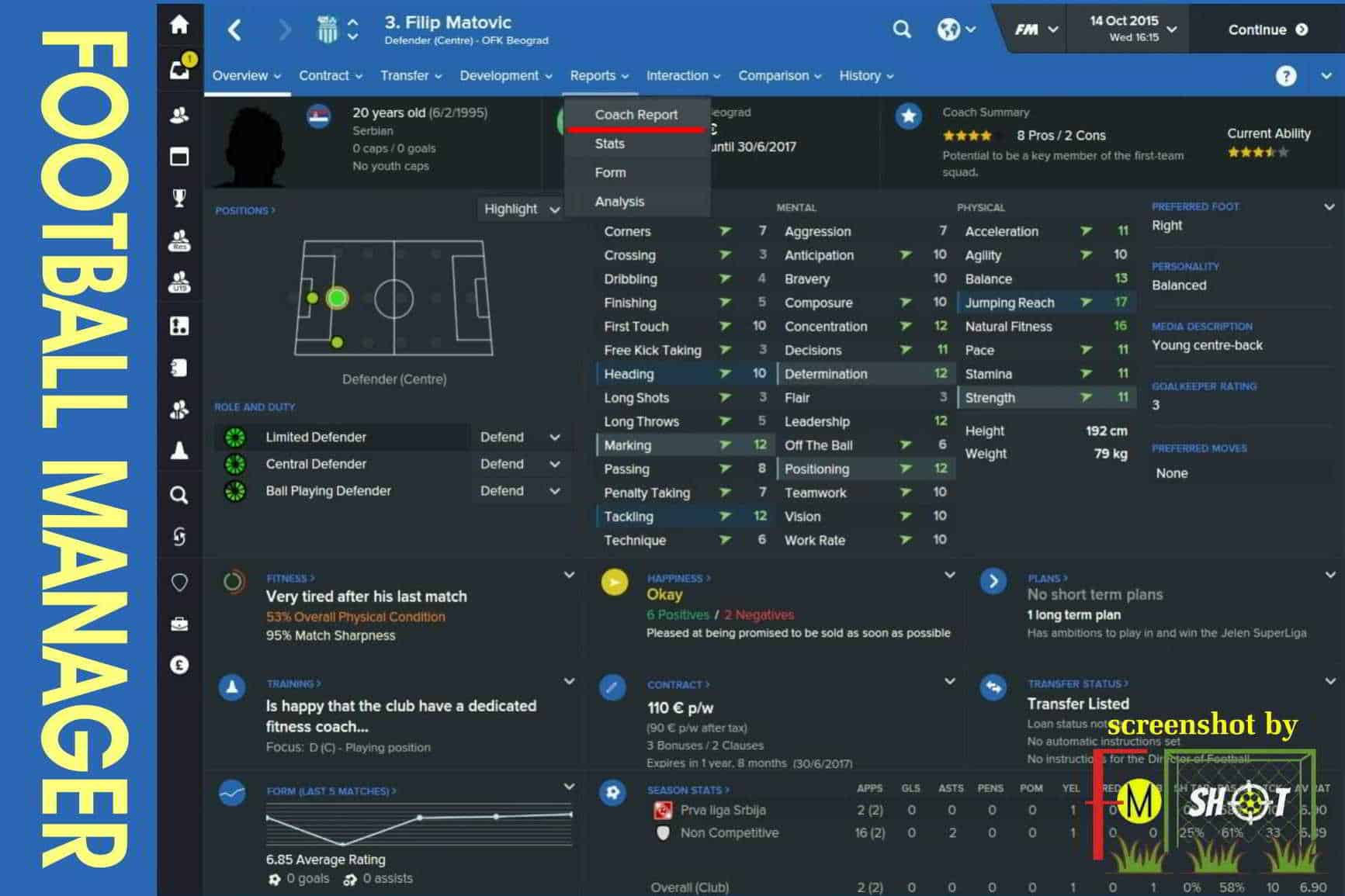 Of course, other members of the backroom team have the same opportunity. But all of them haven’t such good attributes as judging player potential (JPP) and ability (JPA).

It’s enough to look at the picture A36 and everything will be clear. When you have the opportunity to hire such an expert, try to keep him with all the forces at the club.

On the occasion of finding a talented player I try that a detailed scouting can be done by the HoYD , if it is feasible, not by a scout.

More correctly, I do this mostly when I have doubts regarding the transfer or loan.

Do not throw money “on the first ball“. You see the awesome attributes and think – I’m looking for you!

But it might happen that you don’t pay attention to form, frequent injuries, height, weight and so on.

The problems arise later. In order not to make such a mistake, send an expert to do the task on your behalf. 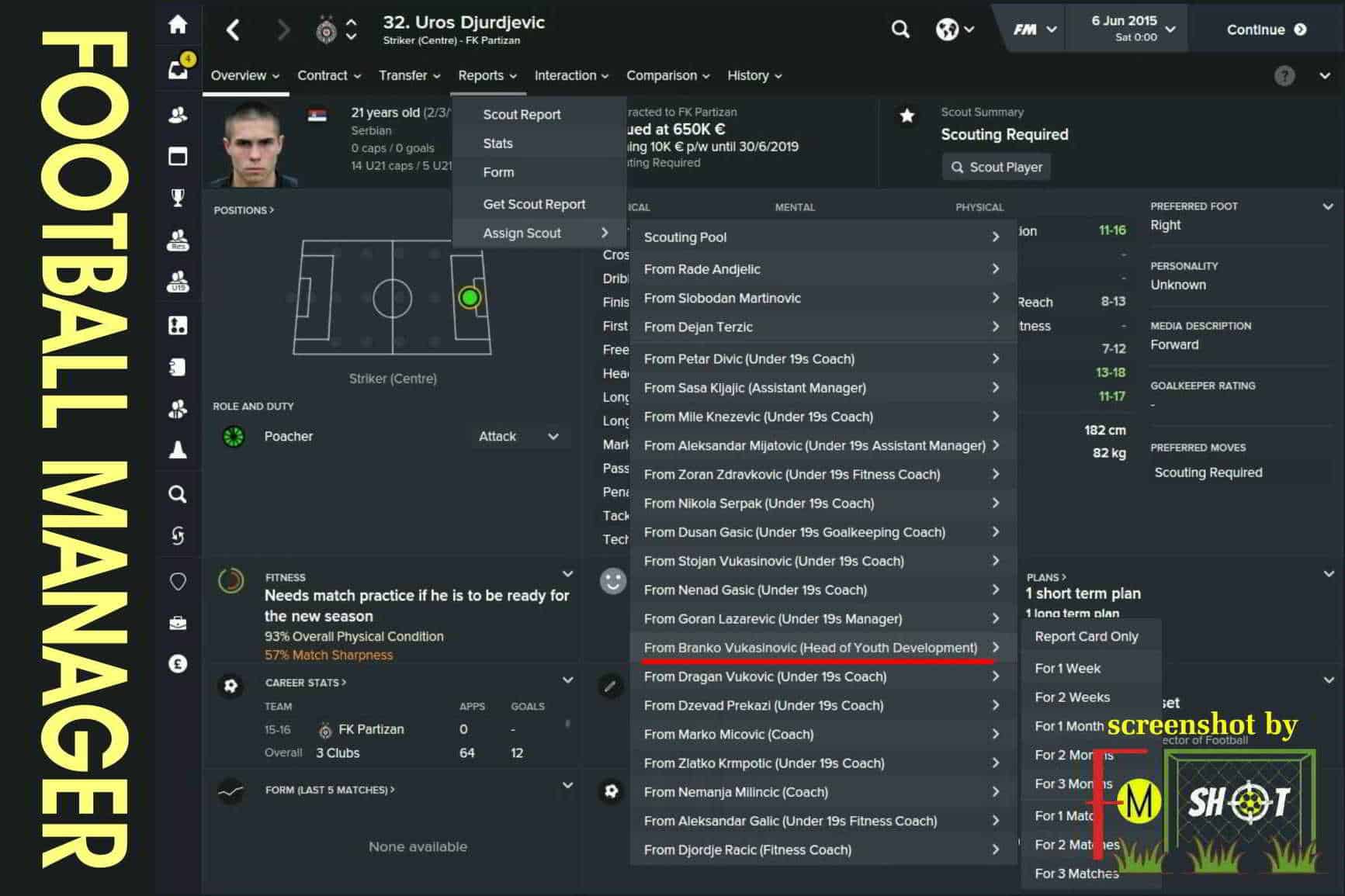 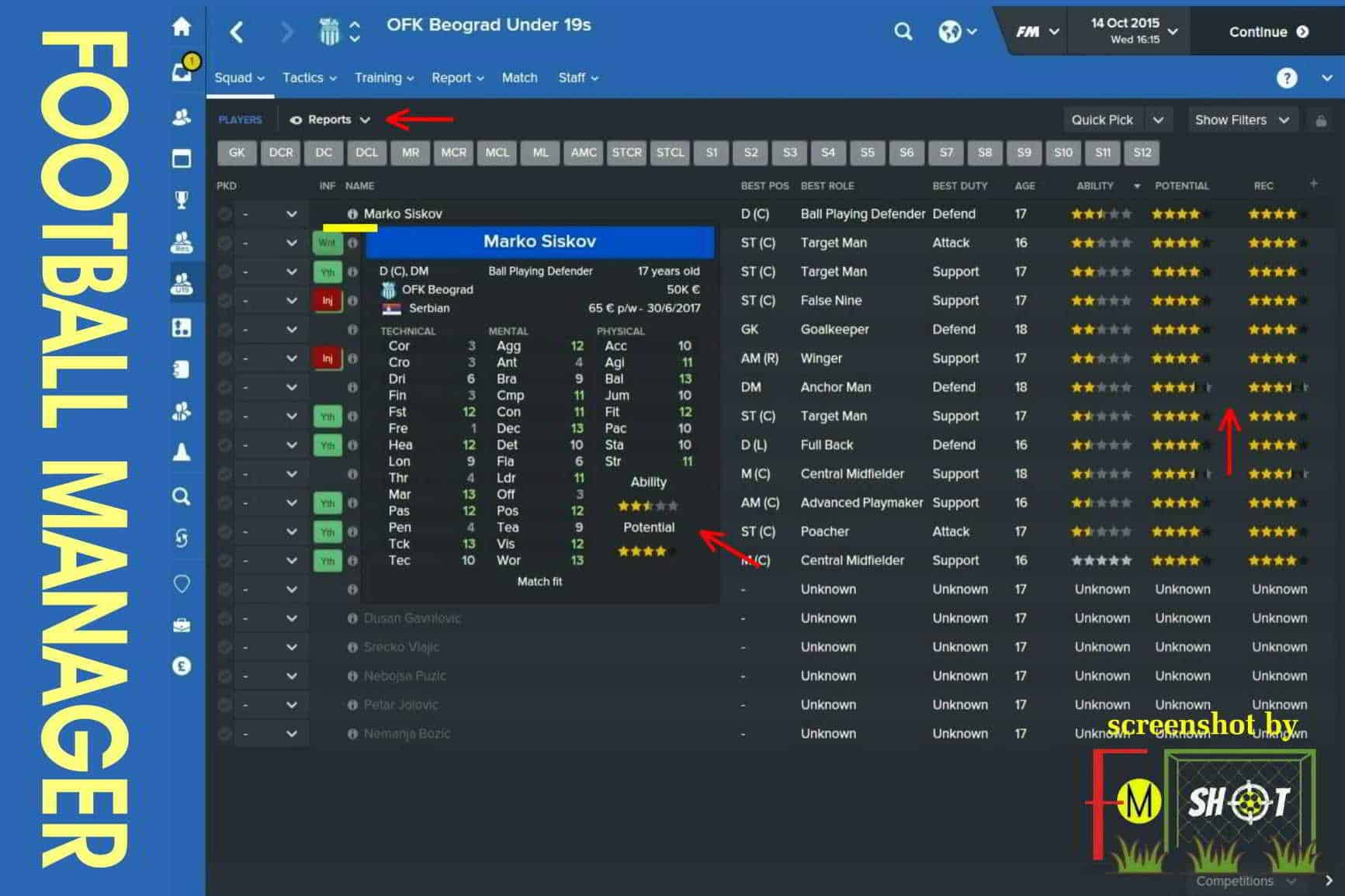 This is my vision of a man from the shadow. Maybe I missed something or missed the point of the story.

So I would like to hear your opinion in the comments below. What do you think about this position at the club?

Do you know anybody who would do the job better than Bernhard Peters – Hamburger SV?